Since it was published in 1964, Roald Dahl’s Charlie and the Chocolate Factory has inspired many of us with sweet dreams. Who hasn’t dreamt of happily wandering around Willy Wonka’s very edible garden and sampling everything from the flowers, to the leaves and the grass, and best of all, dipping a finger in a river of pure chocolate and savoring its sugary goodness? Anyone who’s read the book or seen either Gene Wilder or Johnny Depp’s movie versions would want to be in that world.

Inspired by the fantastical phenomenon that is Willy Wonka and the marvelous confectionery from the pages of the iconic children’s novel, Sweet Nest Events recreated this world in a memorable 1st birthday for a lovely little girl named Zoe. Her happy memories from this party are captured in pictures expertly taken by Rio Jones Photography. So come with me and let’s “begin with a spin, traveling in the world of Zoe’s pure imagination”…

The magic begins with a visual feast. On the ceiling is a canopy of olive green fabric. All around and underneath it is a harmony of colors with huge basil green and lime green balloons; blue, purple and lilac honeycomb balls; yellow paper ball lanterns and finally a host of pink, sky blue and mint green pom-poms. It is simply stunning and evokes the enchantment we find in Roald Dahl’s literary creation. I’m sure Zoe’s guests were half-expecting a Johnny Depp look-alike wearing a big purple top hat to appear out of nowhere. 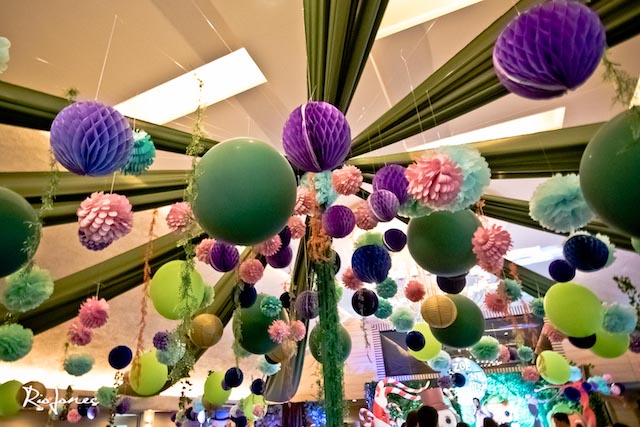 Zoe’s zany stage is a recreation of the novel’s fabulous edible garden with huge red toadstool mushrooms, a red and white striped peppermint candy tree and pink and purple trees made of hot spun sugar. It looks so inviting… like a magnet, it draws all the children’s attention to a Funko Pop Willy Wonka and two of his hardworking Oompa Loompas ready to give them one spectacularly fantabulous time! 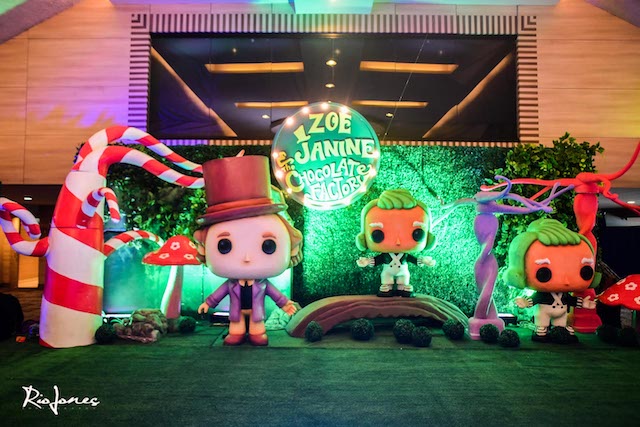 The tables are playfully decked with swirl lollipops on square vessels that look like huge blocks of chocolates and scattered around it are golden eggs. Boxes of Wonka chocolates are arranged beside it, waiting for anyone to dive in for a golden ticket. 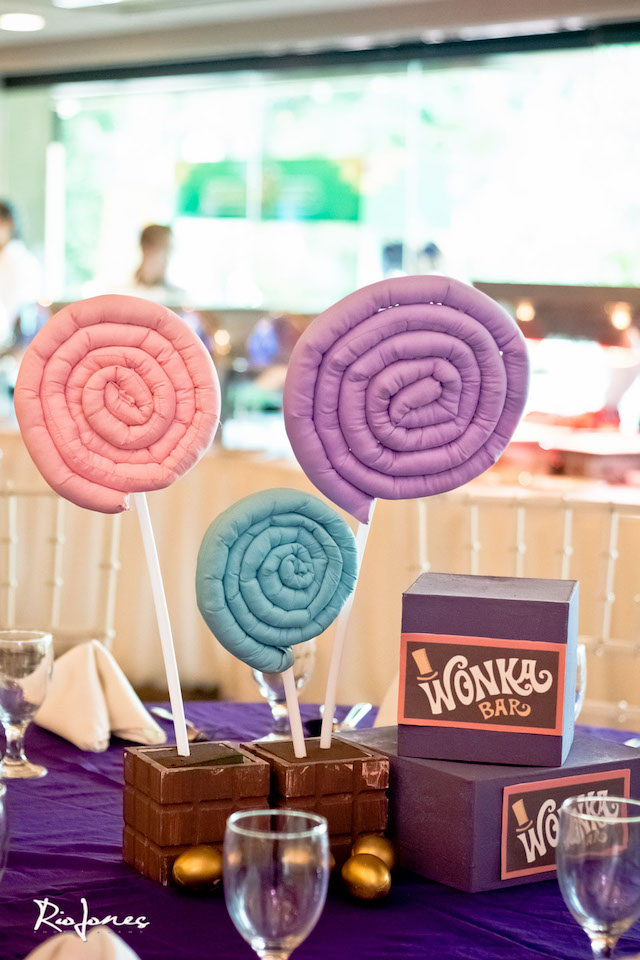 Wouldn’t you just love to sink your teeth into this deliciously fun cake? It’s an awesome explosion of color in every way that Willy Wonka’s garden is. The first asymmetrical layer is covered in chocolate brown fondant and on top of this layer, green butter cream frosting is spread to look like grass. A fondant Willy Wonka and Charlie Bucket holding his golden ticket stand among mouth-watering sweet treats like marshmallow twists, chocolate candies covered in sprinkles and colorful fondant candies. The second delectable layer is covered in a light colored fondant with cogwheels to represent Willy Wonka’s factory at work, continuously creating goodies. More marshmallow twists and swirl lollipops adorn the cake, along with an Oompa Loompa. The third layer, covered in light blue fondant is adorned with fondant versions of Veruca Salt and Violet Beauregarde. Between them flows the chocolate waterfall that’s supposed to churn the chocolate river into the perfect mixture. On top of this cool cake is Willy Wonka’s purple stovepipe hat. 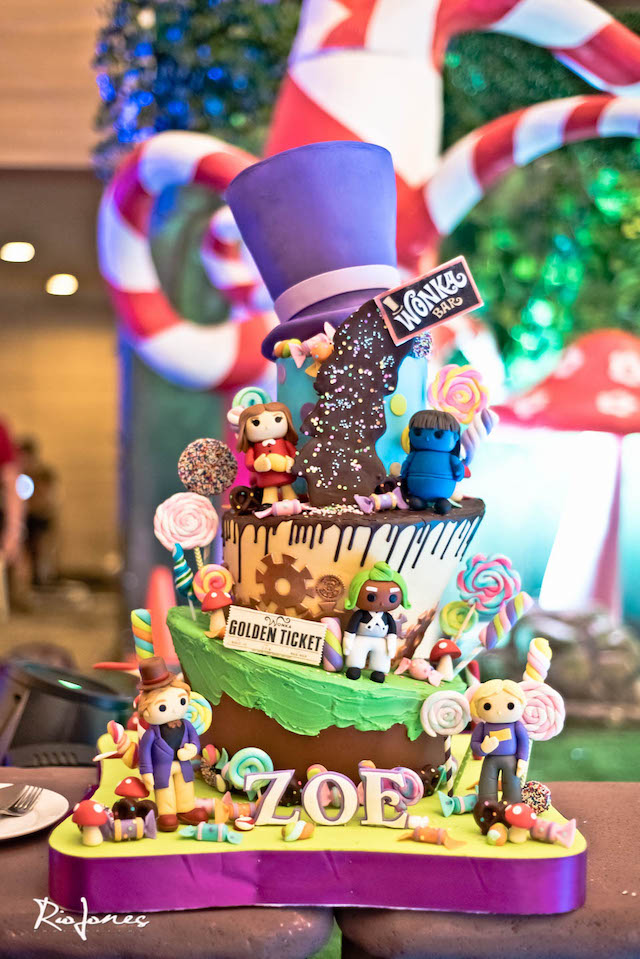 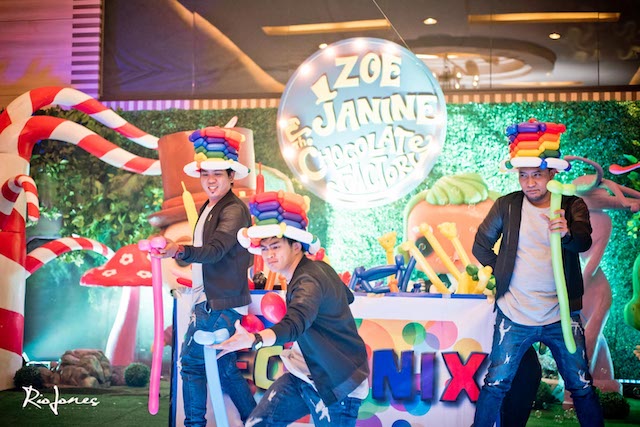 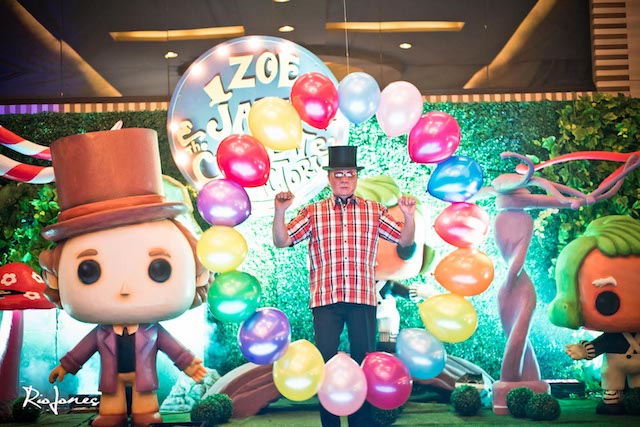 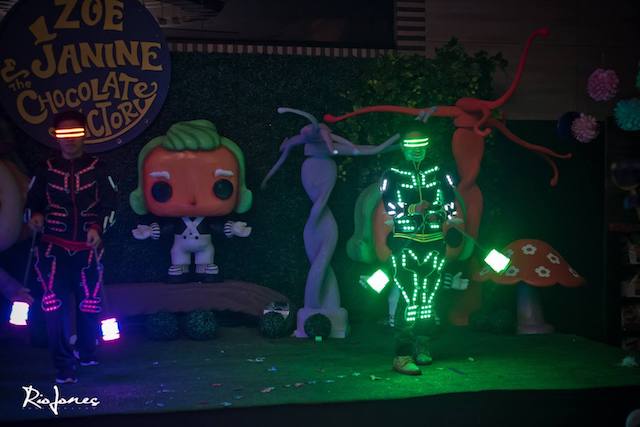 What a blast the young ones must have had with games of the kind that Willy Wonka would approve. And what a thrill playing for such cool prizes – toys and sweets galore! 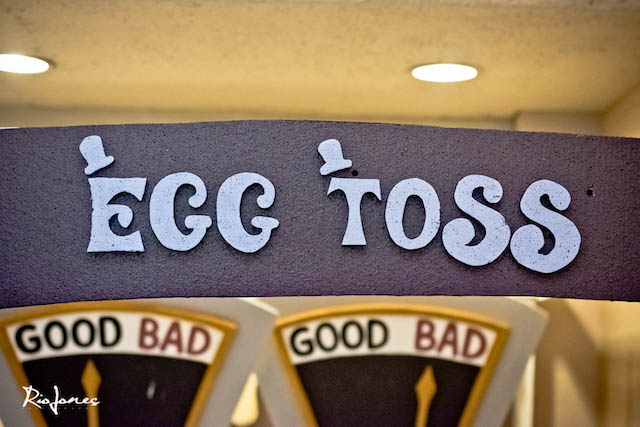 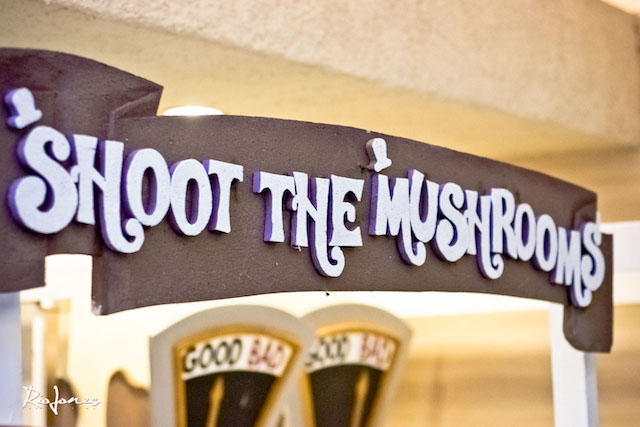 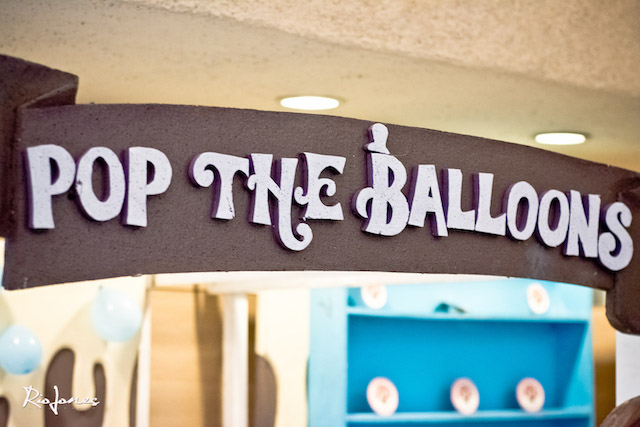 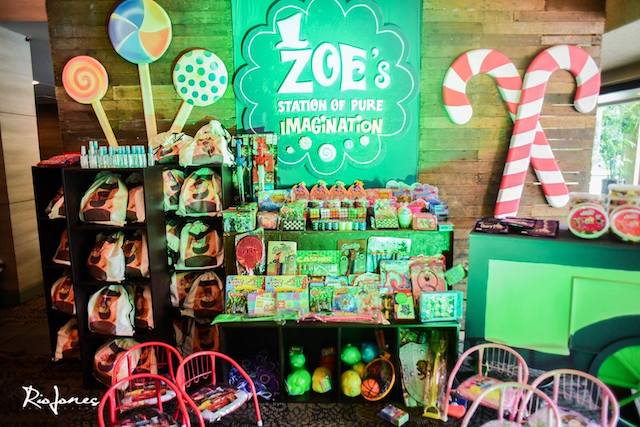 Guests were invited to strike a pose or two at this fab photowall for an instant ig-worthy photos! 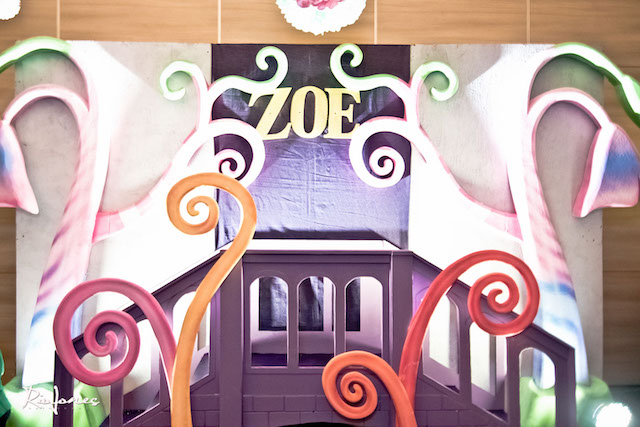 These tote bags are the perfect giveaways. Not only do they look terrific, they’re also very practical. Best of all, Zoe’s friends have something to remind them of the spectacular time they had at her party. 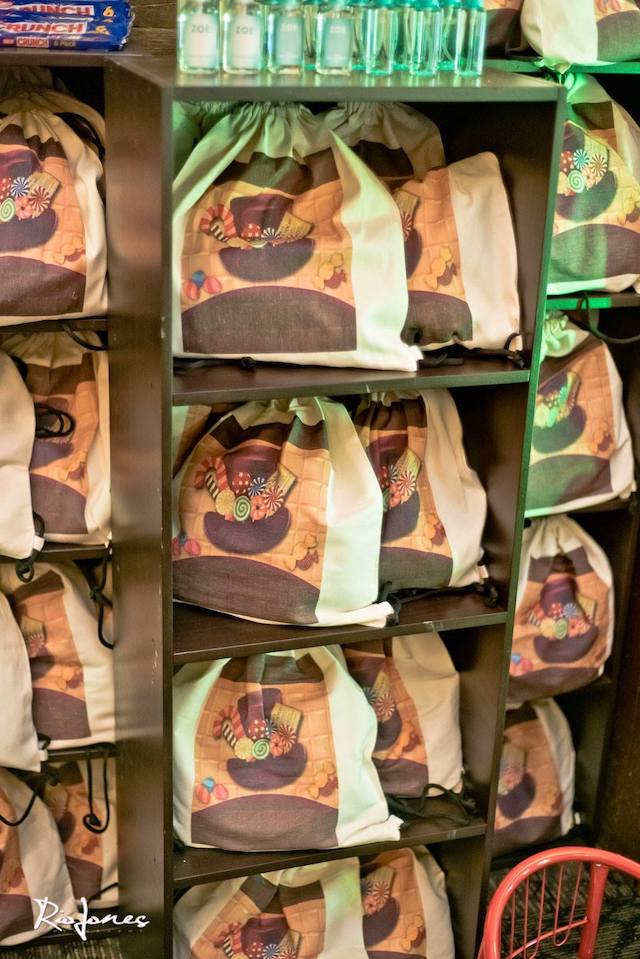 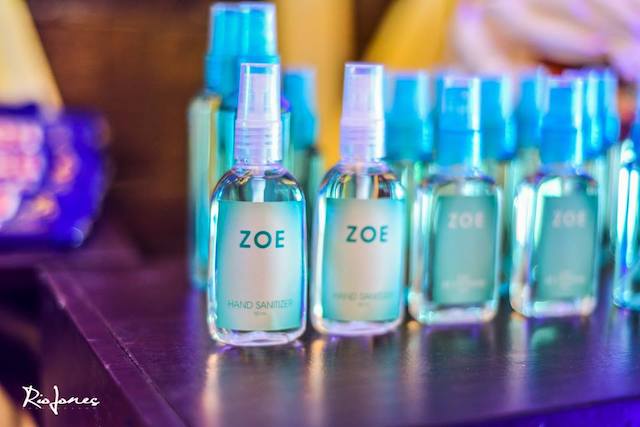 Pretty in pink, Zoe beams as only a pure soul would. We can only wonder at the beauty we might see through her eyes… 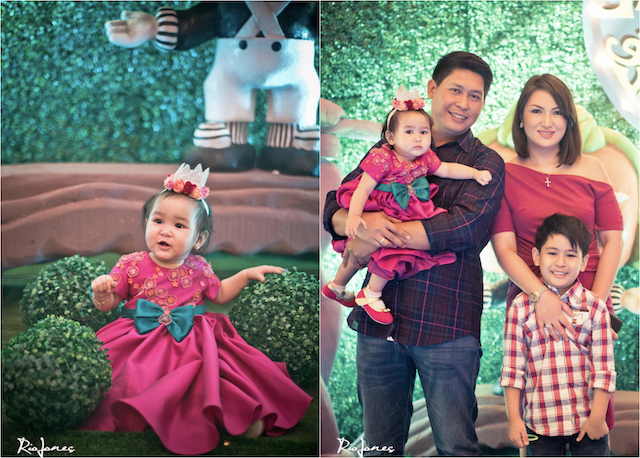