To be among the “Disney Imagineers” must be one of the greatest jobs on earth… Imagine what it would be like to conjure magic by combining artistry with science and technology. This is what the “Imagineers” did when they created a boat ride which they called “It’s a Small World” for the 1964 New York World Fair. It was such a huge success then, and continues to be a much sought-after ride among Disney theme park visitors. It’s now even a popular theme for children’s parties. And why not? – It’s exciting and magical, and absolutely delightful!

With Bespoke Manila’s expert planning, creativity and their own brand of chicness, our beautiful twins, their family and guests are in for an awesome experience like no other. So let’s embark on this party tour with Mikel and Mishka in their “It’s a Small World” birthday celebration!

As any invitation should be, Mikel and Mishka sent their guests cool, colorful invites featuring the façade of the Small World attraction with playful Mikel and Mishka characters waving hello. 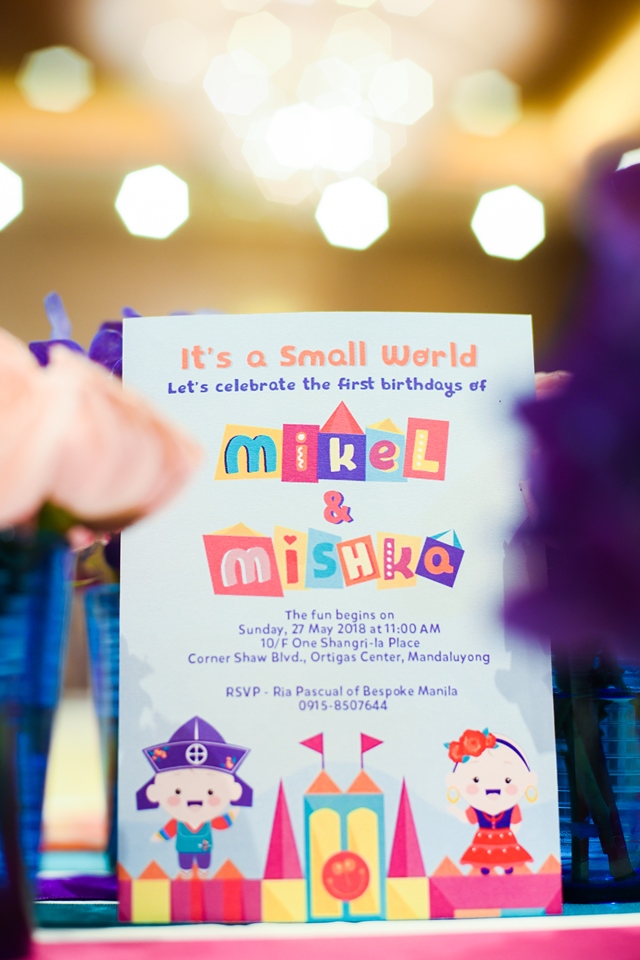 The stage depicts the whimsy and fantasy of Mary Blair’s design – It’s a Small World is considered an immensely popular Disney masterpiece owing to her visual aesthetic. Mimicking the invitation, the stage backdrop is the famous clock tower with country landmarks on either side, all painted with vivid colors and fun geometric shapes. It most certainly gave the guests a feel of “the happiest cruise that ever sailed”. 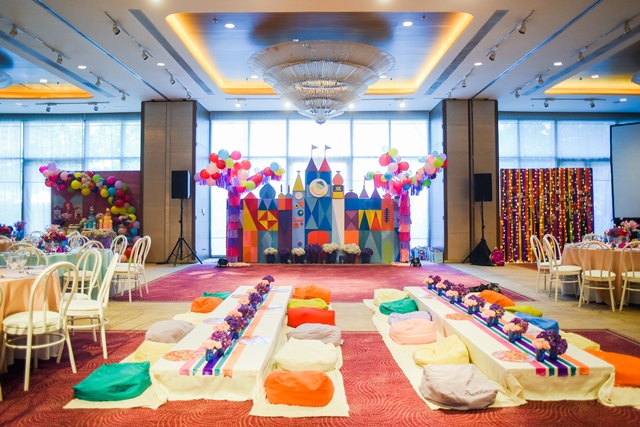 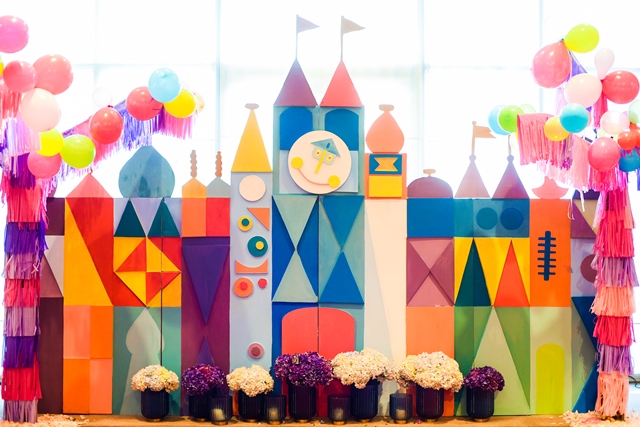 The table centerpiece mirrors the fun geometric shapes in vivid colors and toy doll versions of the characters from the Disney attraction. A blue vase with pretty Dendrobiums and an arrangement of blush and apple red roses, violet orchids, white carnations and sea lavender are a beautiful addition to an already attractive table. For Mikel and Mishka’s young guests, a long, low table was arranged in front of the stage with large cushions for their seats. The table was adorned with blue mason jars and a bunch of purple and white flowers. 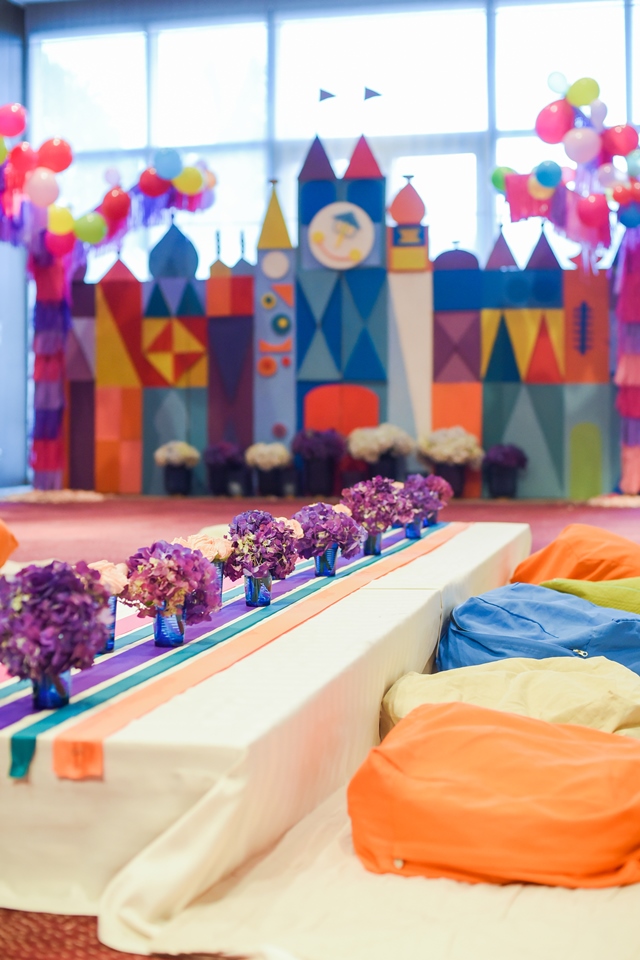 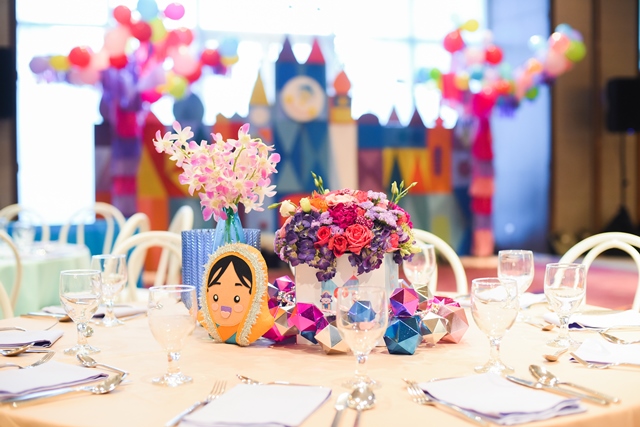 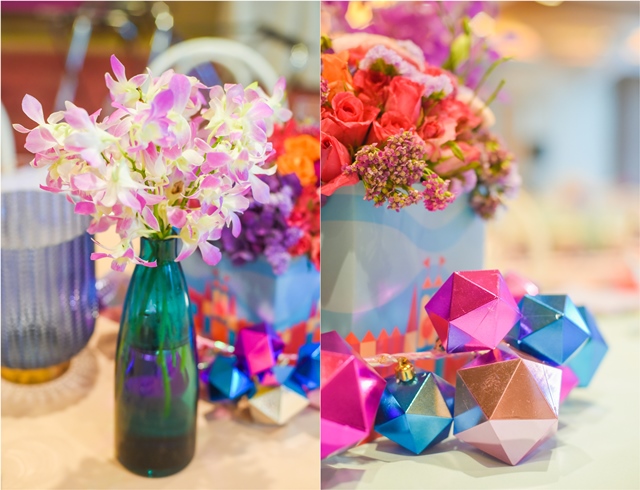 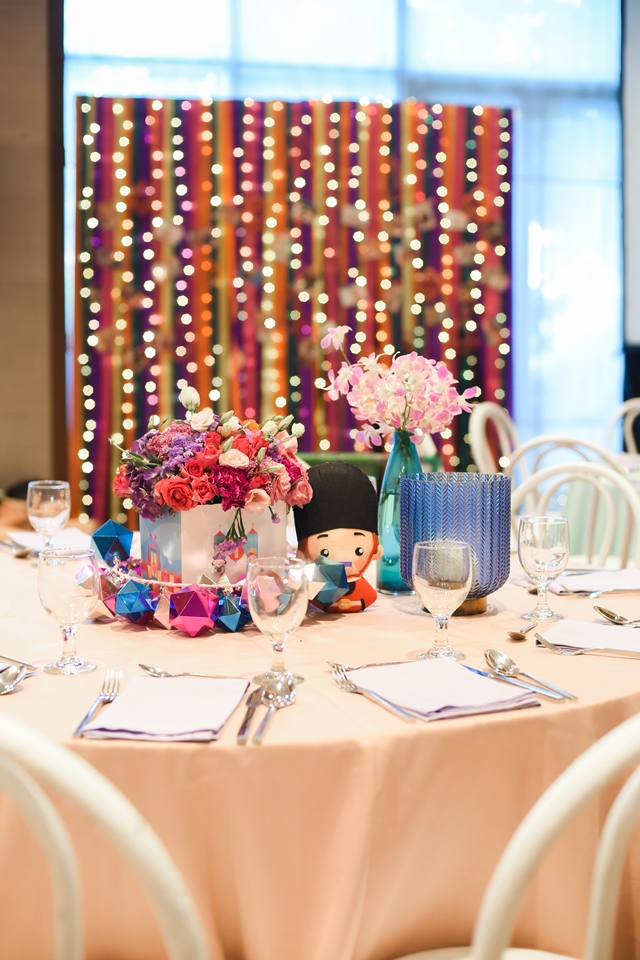 Mishka’s 2-layer cake is covered in dainty pink and yellow fondant. Its two turrets on either side create a vision of the Taj Mahal, while Mikel’s cake, covered in purple and blue fondant, has two towers that is reminiscent of England’s Towers of Parliament. Both cakes are simply adorable! They look to good to cut up and eat! 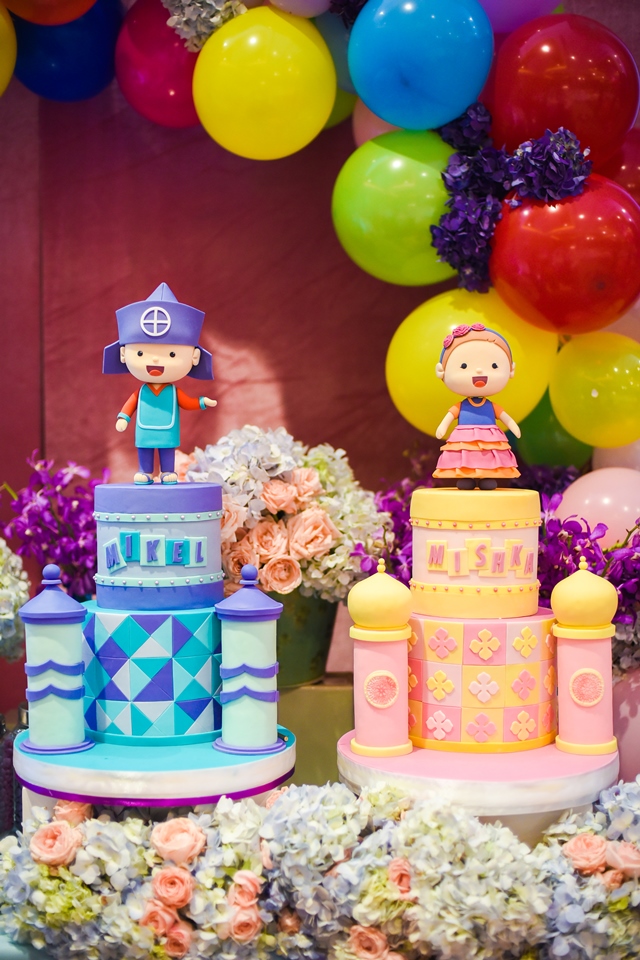 The dessert spread is an impressive display of gorgeous treats… keeping Mikel’s and Mishka’s cakes company are jars of candy corn, gum drops, glazed candies, and trays of mini cupcakes with butter cream frosting. There were cake pops designed like hot air balloons and some with whirligigs. There were sugar cookies shaped like the number 1 and the letter M, and milk served in vintage bottles. What a sugar rush! 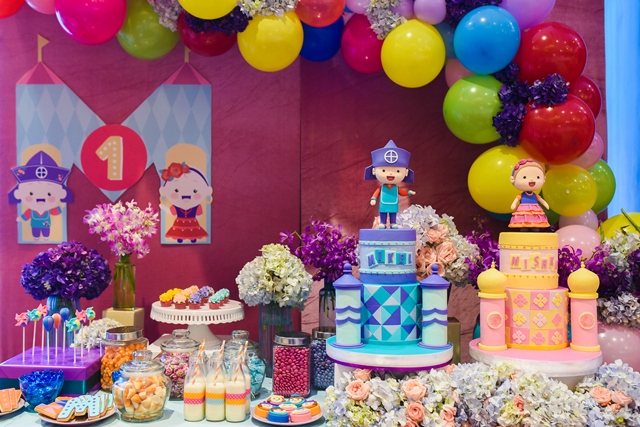 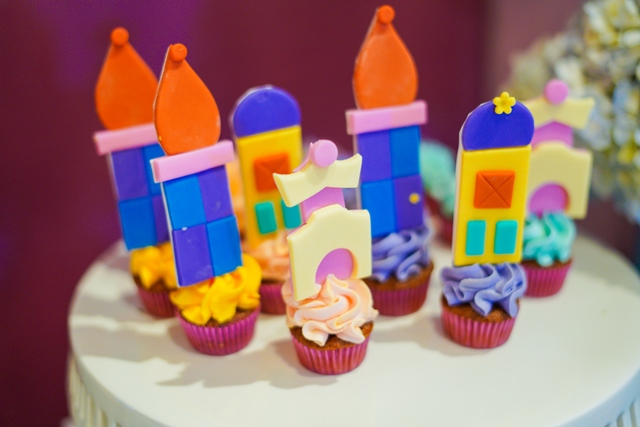 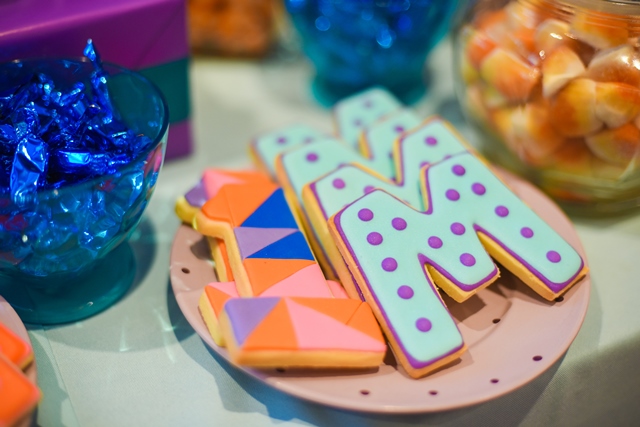 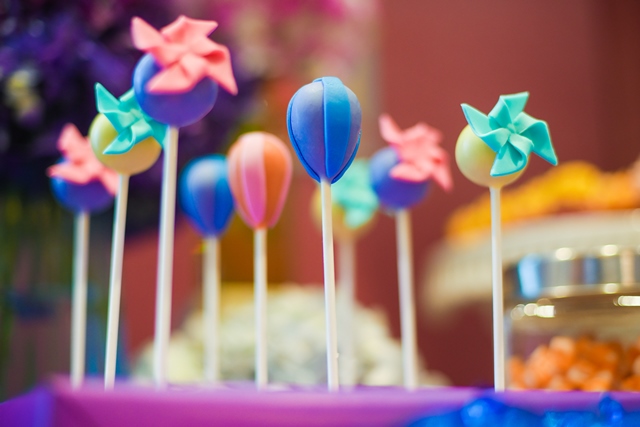 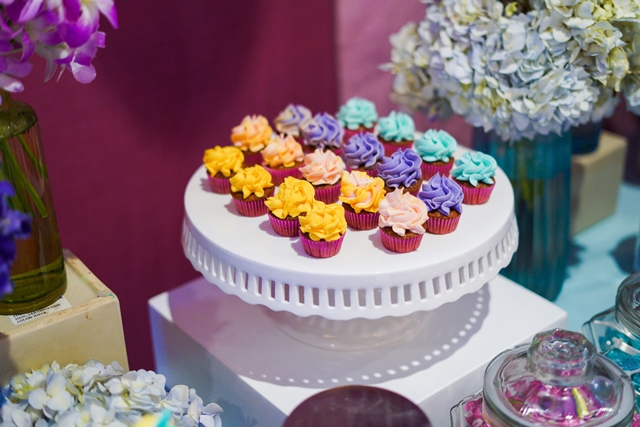 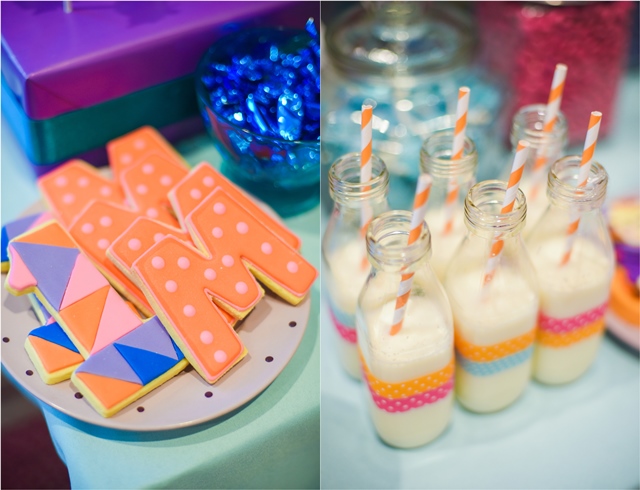 The games are something that everyone looks forward to in every party. Mikel and Mishka’s guests, both young and “not-so-young”, must have enjoyed themselves tremendously! Two teams of adult guests racing to pop all balloons first must have been hilarious both for the players and spectators. 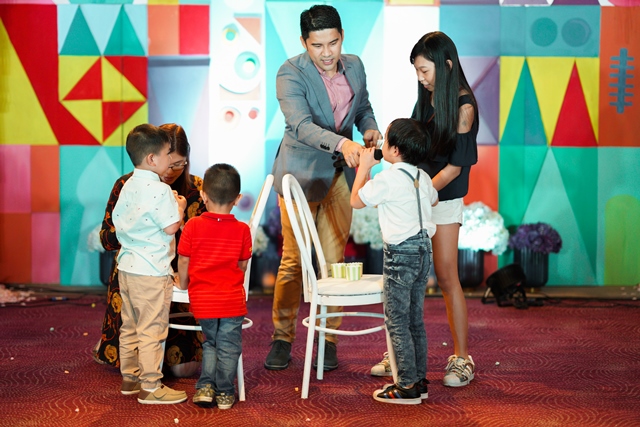 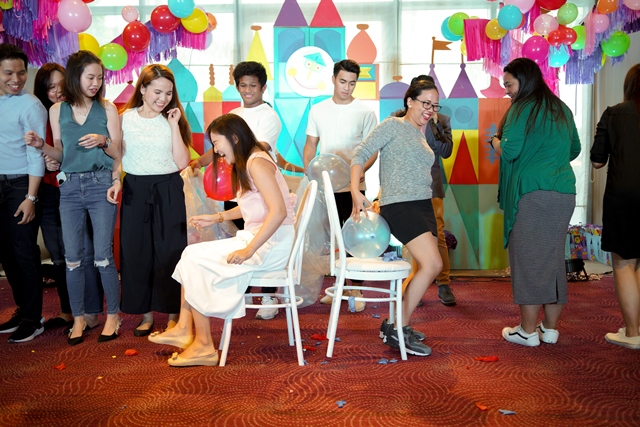 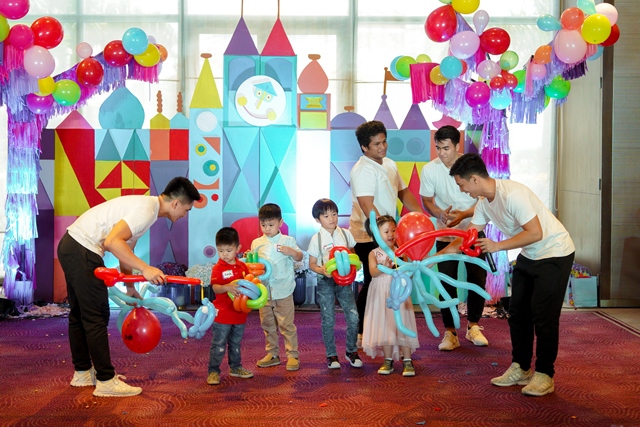 The Mary Blair flair continues with the dazzling colors and quaint geometric shapes used to decorate the photowall / photo gallery. Guests write their birthday messages for Mikel and Mishka alongside their pictures in an album that will become part of their keepsake box. 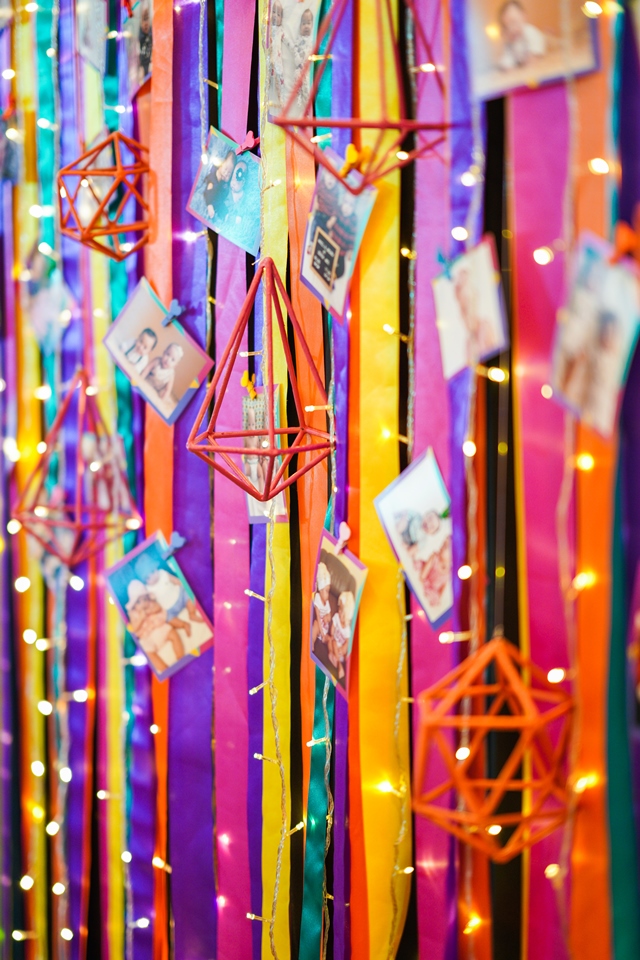 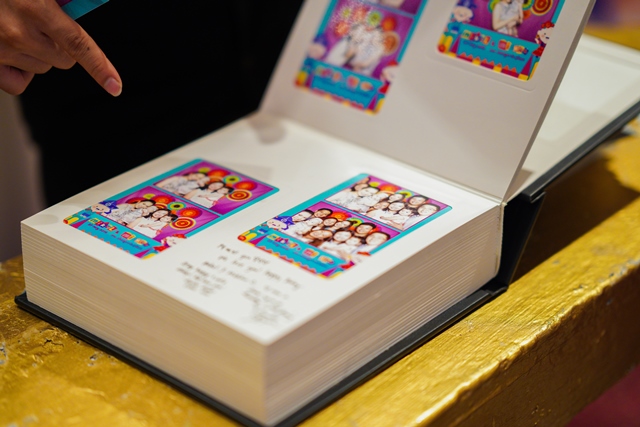 A child is such a blessing, and to have two is twice the joy, profound and immeasurable! Mikel and Mishka’s parents must be happy beyond words to have them and to see them grow together. We look forward to many birthday celebrations as wonderful as this in the years ahead… 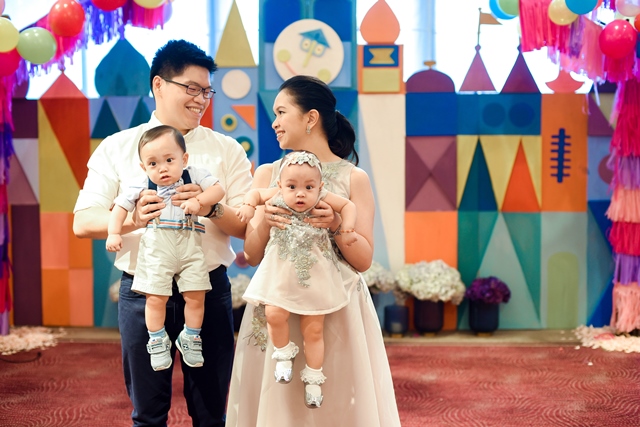 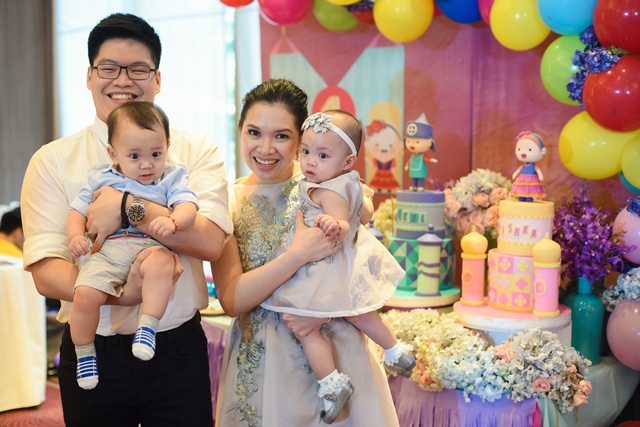