Everyone loves amusement parks, and for most kids, nothing is more fascinating than the carousel. True to its moniker the merry-go-round, it spreads cheer all around. It’s not surprising that it became an inspiration for young Tiffany’s first birthday bash. We at Party Doll Manila had a grand time (wink, wink) organizing it. We bet the creative minds of Sweet Nest Events did, too. Check out the whimsical, colorful snaps from Dapple Photo filled with glittering gold, all shades of pink, and a bit of purple and aqua.

Come one, come all, and take the ride of a lifetime! A pair of golden horses flanked the purple-and-pink entrance as if welcoming all guests to a day of fun and laughter. We really loved the gilded trimmings and overall girly vibe. 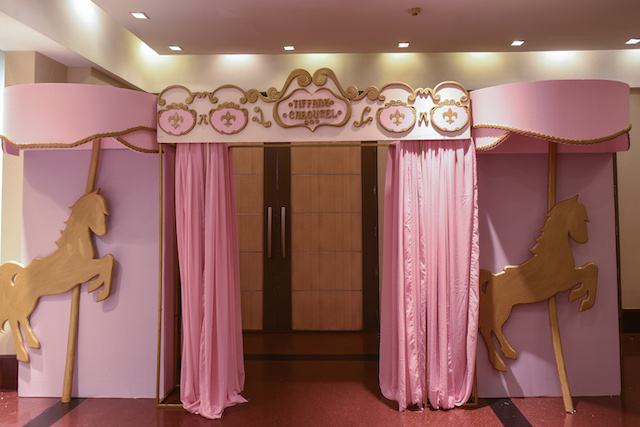 Once inside, we’re absolutely blown away by the colorful, playful ceiling décor. Swags lent an airy feel to the venue, but what really charmed us were the paper lanterns and balloons in different sizes and hues. While baby pink was the main color, it was complemented brilliantly with lavender, Tiffany blue, and mint. 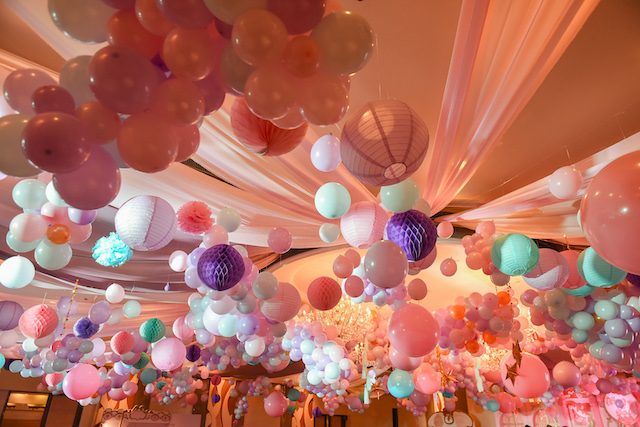 Our girlish hearts screamed with absolute delight when we spotted the dreamy, all-pink stage! Ponies? Check! Princess? Check! A charming standee of the celebrant, princess Tiffany, is surrounded by pretty ponies with gilded saddles! It’s easy to imagine these ponies were going to gallop ‘round the carousel any time soon! 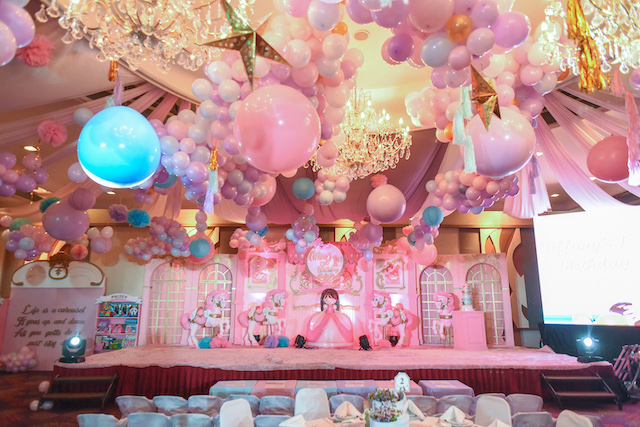 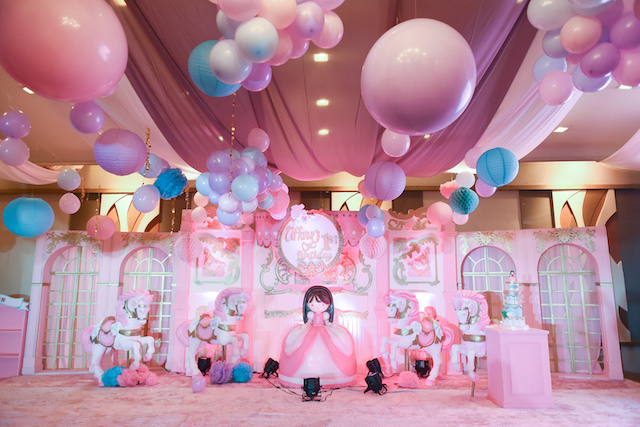 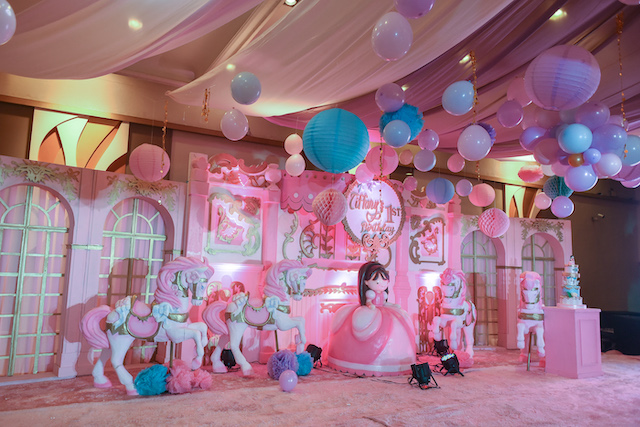 What I look forward to in every fete is how the tables were bedecked. True to theme, some of the tables had a solo carousel pony and a bunch of purple flowers in a golden vase as a centerpiece. Others had a box of bouquet sprucing up space — simple, yet tasteful. 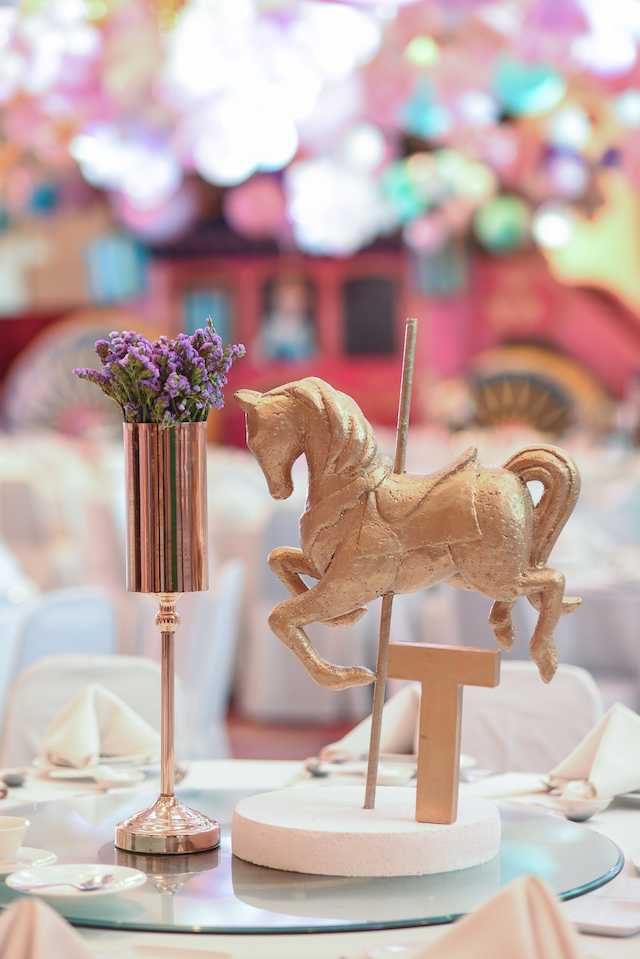 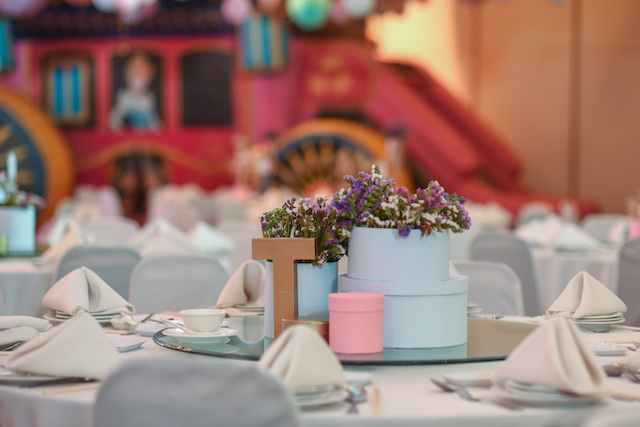 Can we take a moment to bask in the loveliness of li’l Tiffany’s cake? Crafted from the amazing kitchen of Sweet Creations by Mums, it was a four-tiered confection made to look like a tiny carousel. What did we love about it? For starters, we can’t stop raving about the golden trimmings and smattering of aqua-colored accents. 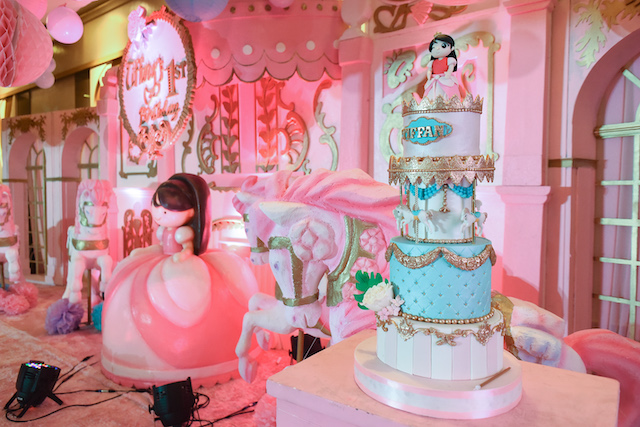 The dessert table, frankly speaking, was heavenly! And the styling? Definitely on point! While the setup was a feast to the eyes, wait ‘till you get to the lip-smacking spread. Cupcakes, cookies, and cake pops were all just too pretty to gobble up in one bite! Sweet Creations by Mums is known for insanely detailed creations, and she never disappoints! 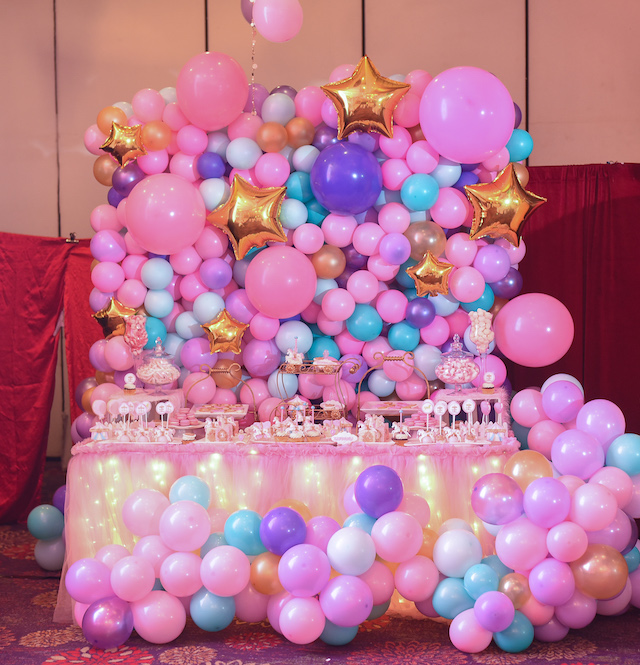 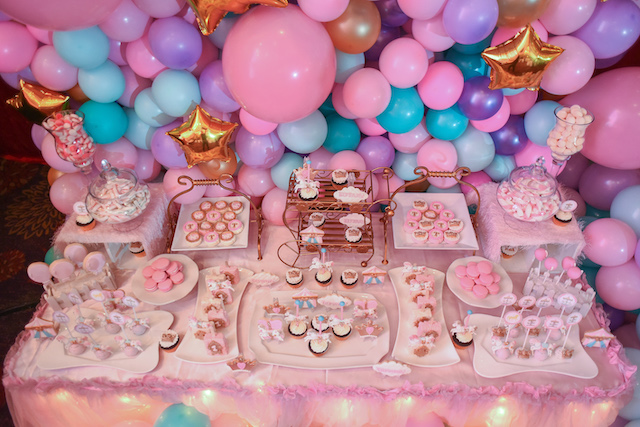 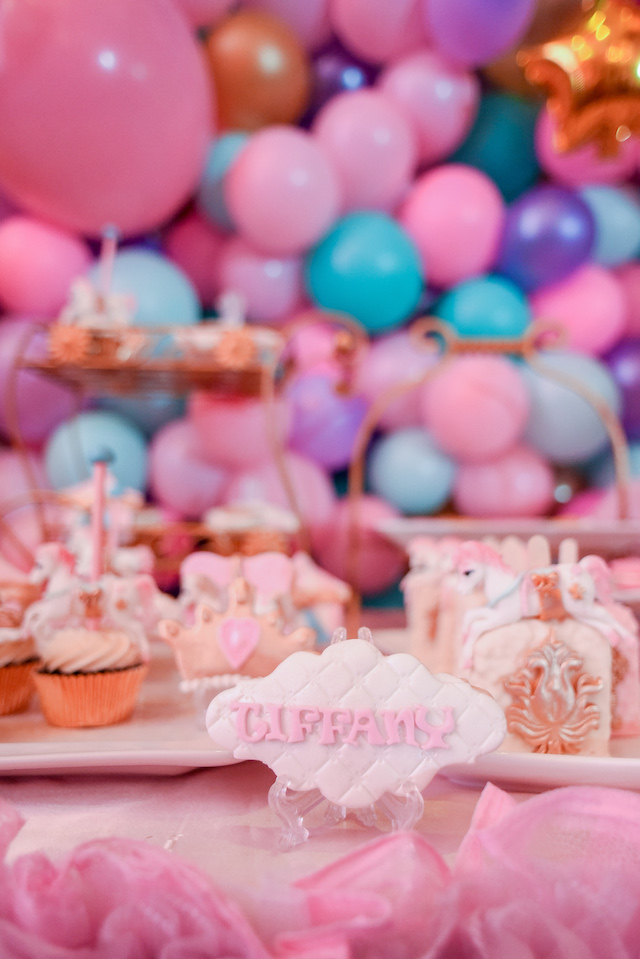 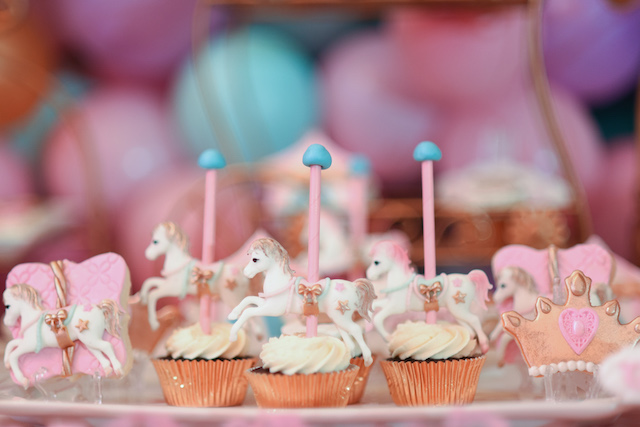 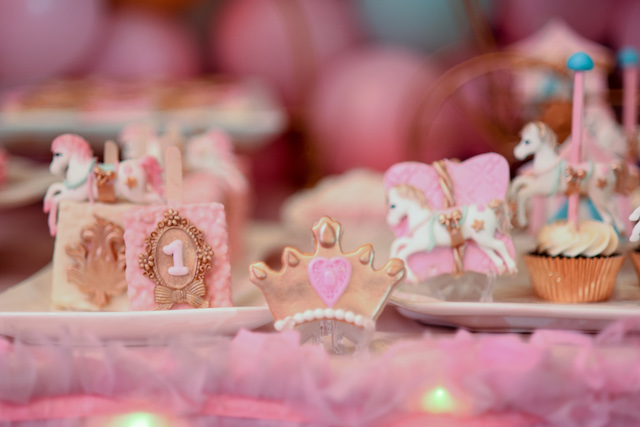 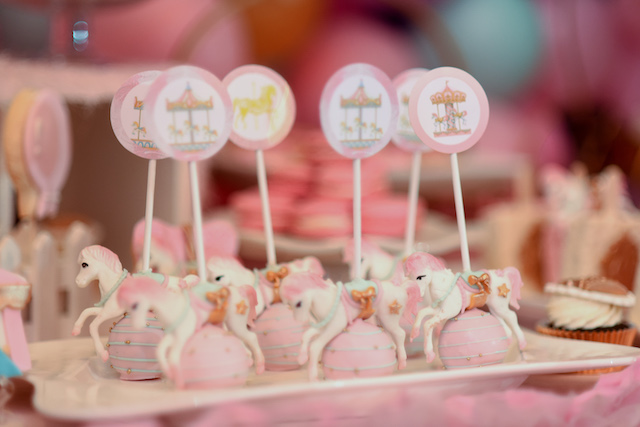 Eloquent host Marvin Tomandao got the ball rolling with exciting games and wonderful performances. Rico the Magician wowed everyone with his cool tricks and sleights of the hand, which kept his audience at the edge of their seats. Disney princesses Belle, Elsa, and Cinderella captivated the young guests with their spectacular number. 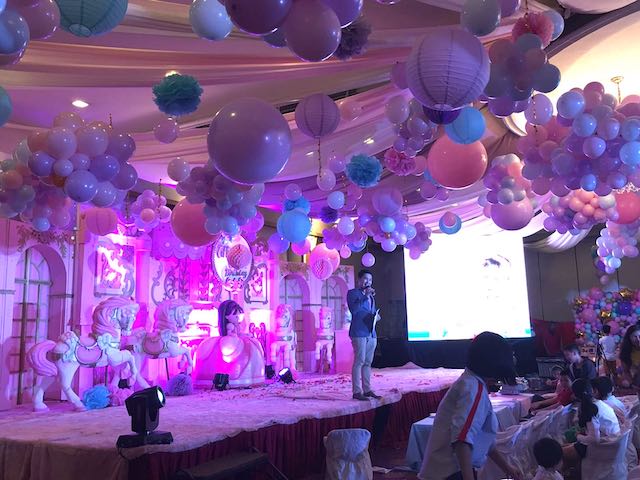 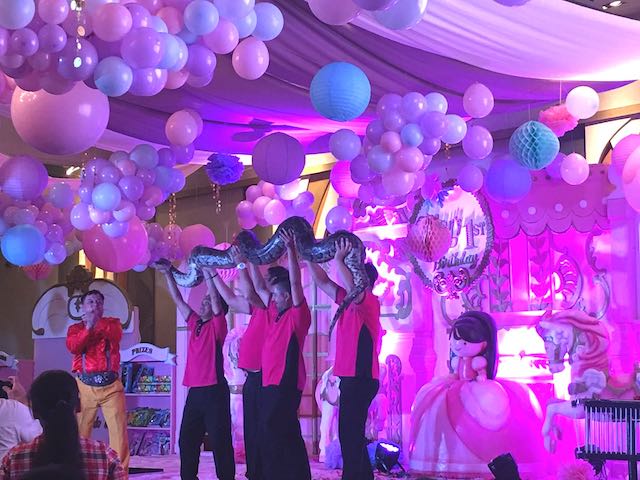 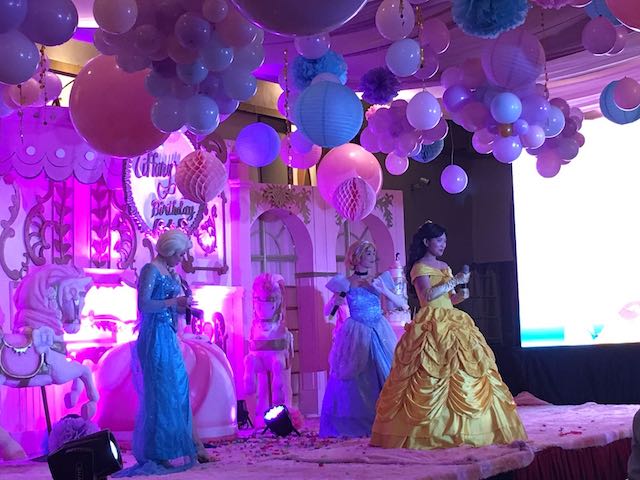 And for the active ones, there was an inflatable shaped like Cinderella’s magical carriage where kids can bounce to their hearts’ content! 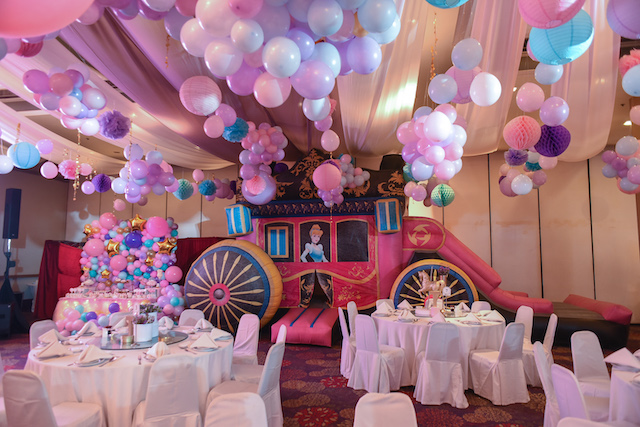 Check out this wonderful nook that’s perfect for snapping Insta-worthy selfies and groufies! The adorable photowall was festooned with giant pink roses, a golden carousel pony, and solitary dainty chair for a , nay, princess-like pose! 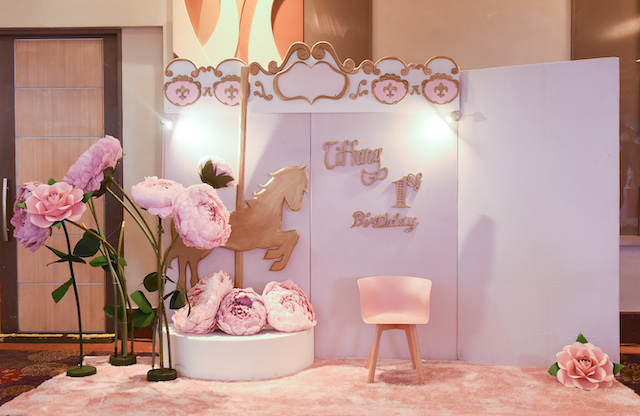