In the world of celebrations, it can get pretty wild. So for the little cowpokes who are into rodeo, horses or the Wild West, and for everyone who wants to go back in time to be in the Old West scene, a theme with country and western flair is certainly just the right bash!

All of Jeremy’s friends saddled up their ponies and giddied-up to the Wild West to celebrate his cowboy-themed bash! Event stylist Tiffany Sy-Co of Parties, Inc. wrangled together everything that speaks “Wanted” – gold coins, cowboy hats, cowboy boots, bandannas, and saloon and bank backdrops! The decorations were kept rustic and woodsy with railings, hays, ropes, and burlaps as the elements. She also went for the Western classic brown and red tones with touches of tan. It was indeed one Western party extravaganza! Yee-haw! Now let’s have a little less talk, corral the little wranglers and ropers, and get this boot-scootin’ birthday bash going!

The guests were brought to a country hoedown as hays, barrels, cacti, railings, and ropes, welcomed them along the walkway to the entryway. At the main door, a Western ranch entry arch with a sign that revealed “Jeremy’s 1st Birthday” was set up. It featured rustic details such as bales of hay, sun-bleached steer skull, and large cutouts of wagon wheel, horseshoes, barrels, cowboy boots, and cactus. It was also decorated with a saloon door cut out of cardboard and drawn with louvers. The entire setup was very welcoming! Howdy y’all! 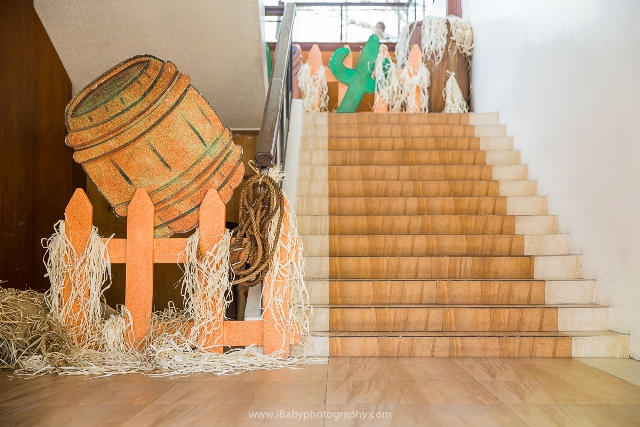 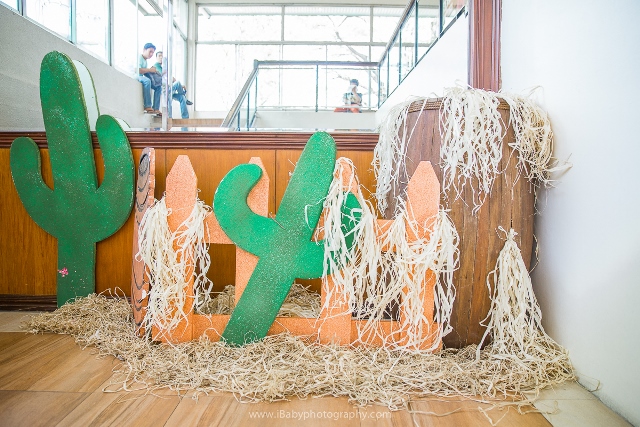 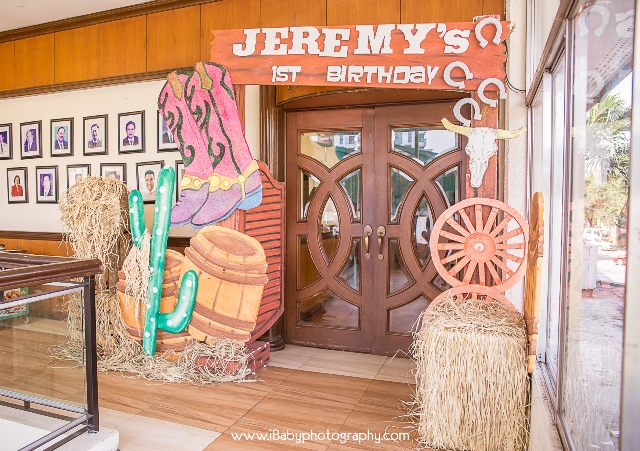 The life-sized backdrop of the Old West town at the stage created a vibe that you’ve gone back in time! The Western saloon, bank, hotel, and watering hole were built right at the area. The cowboy hats, hays, wagon wheels, barrels, and rustic railings added a little kick to the bash and were creatively scattered around the stage. The cutouts of horses and cowboy-shaped characters wearing bandannas around their necks fired up the Western vibe! The JEREMY 3-D letters tied with red bandannas and trimmed with a braided rope gave an incredibly modern look! 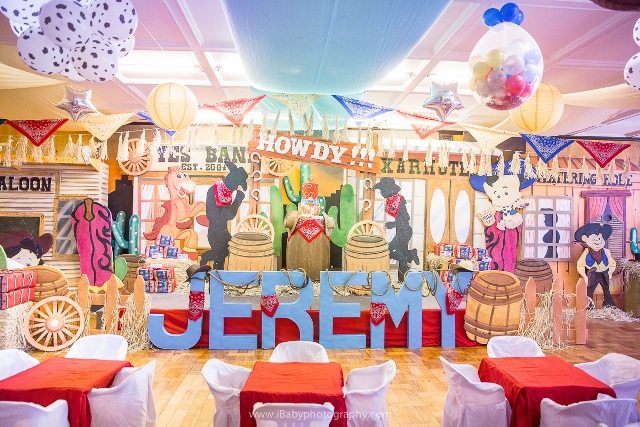 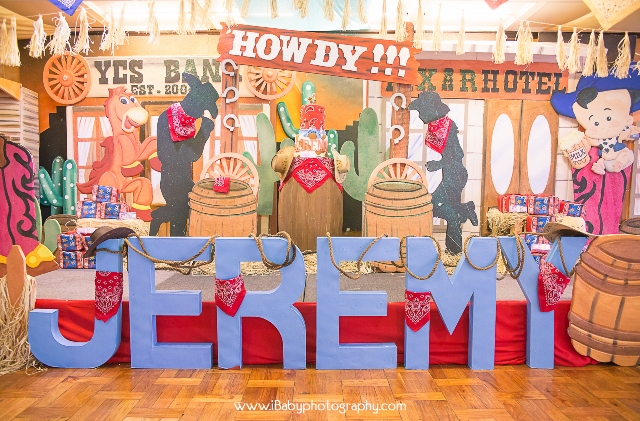 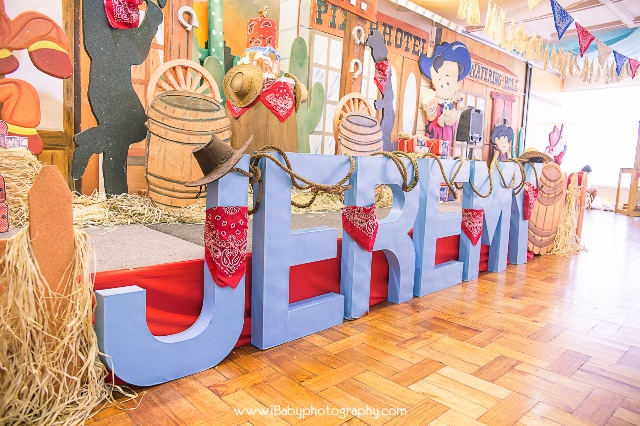 A closer look at the Watering Hole backdrop, fronted with three cute buckaroos! The little rascal up there was especially delightful while holding up a mug of milk! Mmm, what a fun substitute for the real thing! 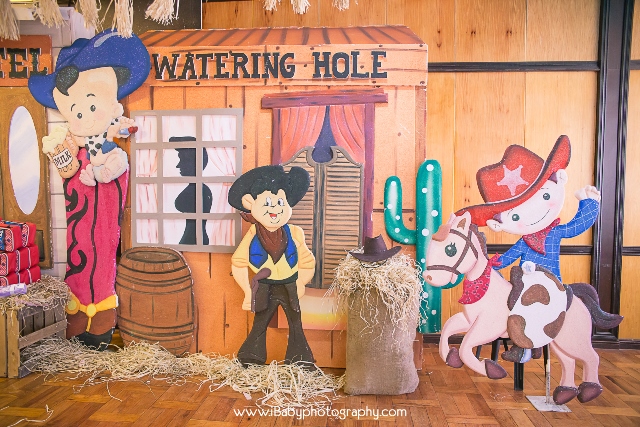 Brightly colored bandannas were used throughout the ceiling décor. The natural-toned paper lanterns and blue ceiling drapes added a whimsical look. The star-shaped balloons and the ones with cow prints were also great additions. The hanging Wanted posters glued on burlaps were the best! 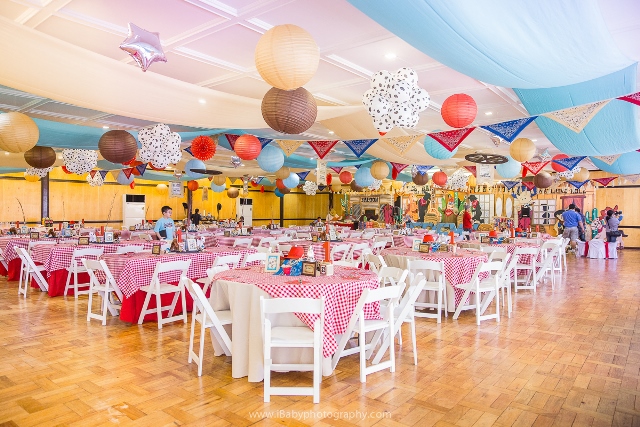 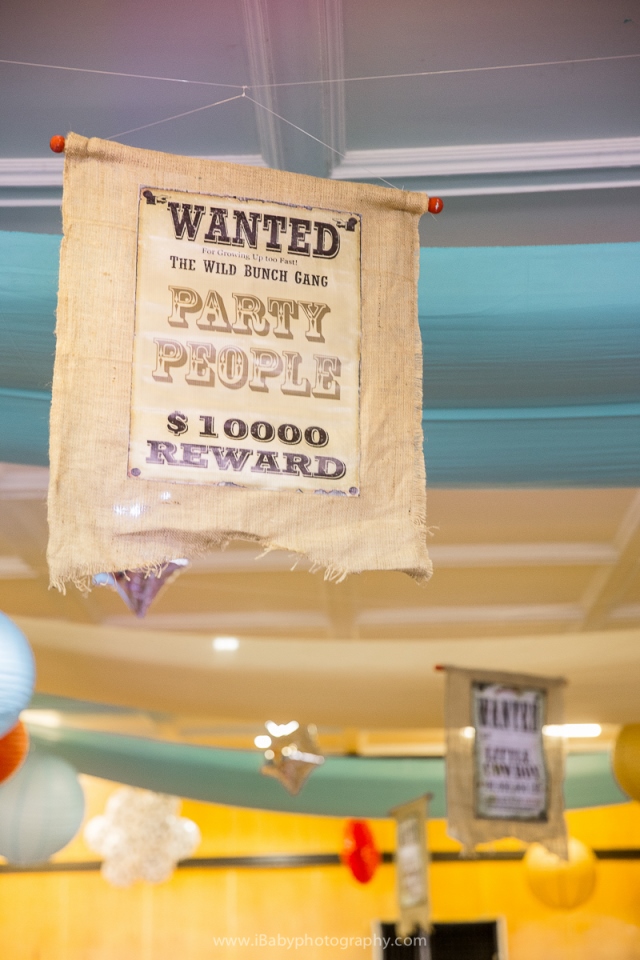 The tables got a good ol’ cowboy treatment using red gingham linens. Some tables were centered with a square piece of denim topped with stuffed horse toys, twigs in a bottle, and framed signage. Others had mini crates, bandanna, cowboy hat, steel lamp, and gold coins as centerpieces. 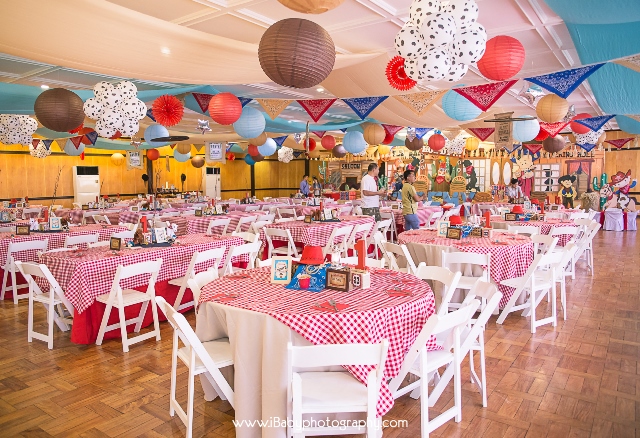 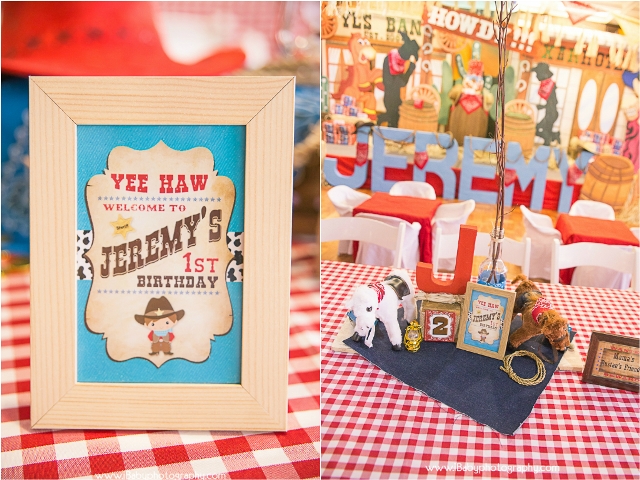 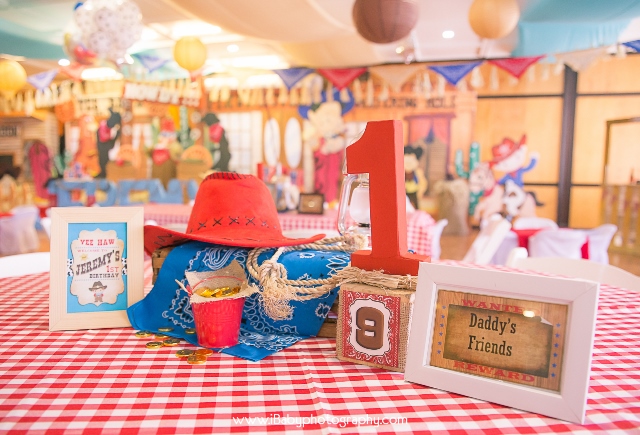 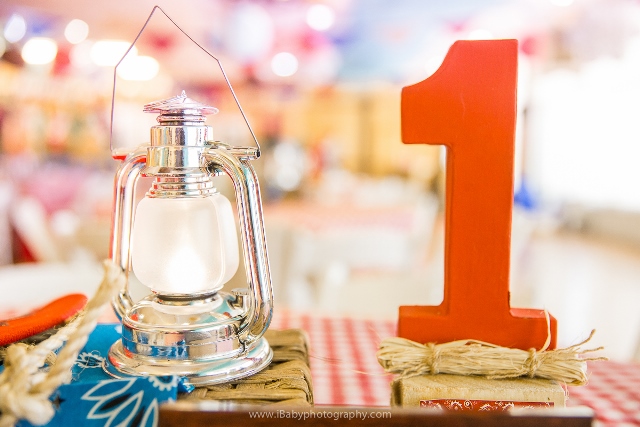 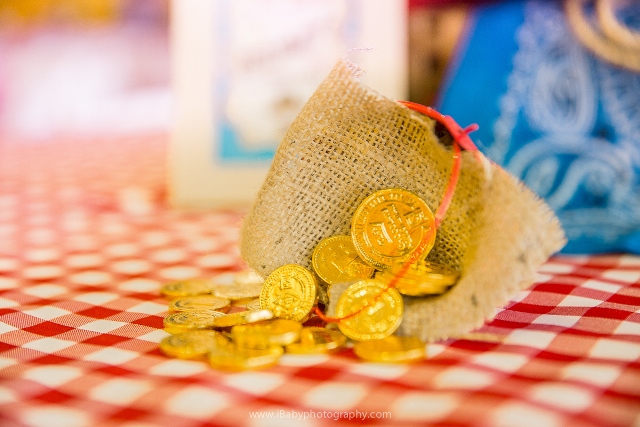 Jeremy’s cake that lined the stage elements was an absolute blast! It was nestled on a barrel accentuated with red bandannas and cowboy hats. The first tier of the cake was flanked by brown cow prints plus his emblazoned name. But the details didn’t stop there! The second tier had paisley prints and small details which resembled that in a bandanna. Clever! The cake was then topped off with a fondant cowboy riding astride a horse. 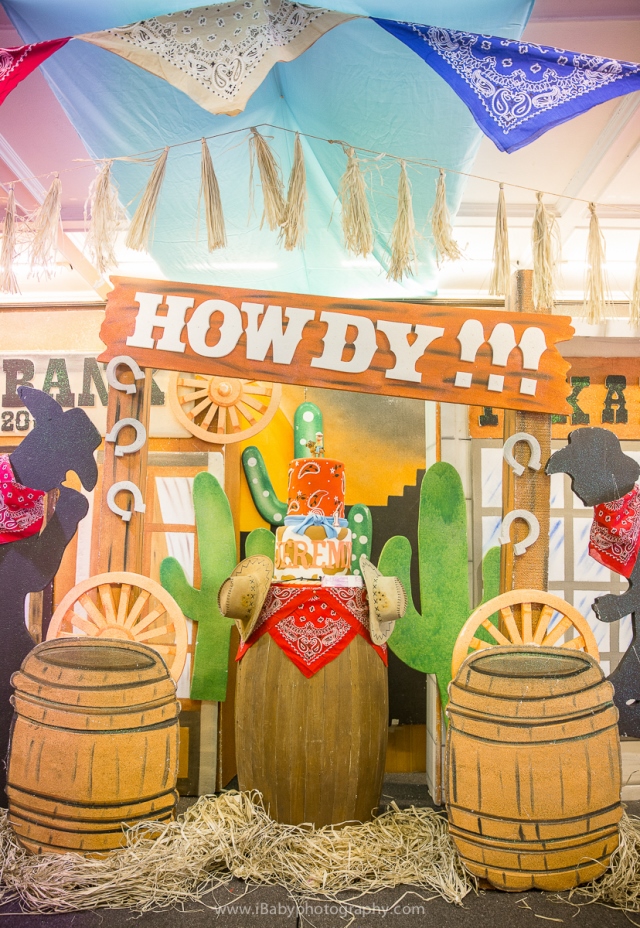 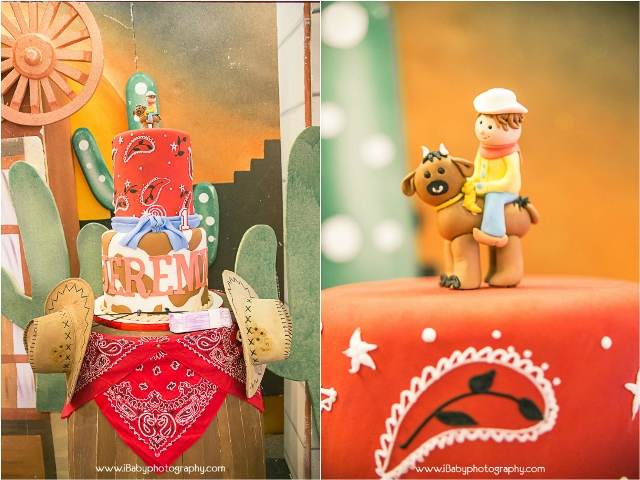 Care for a birthday treat? Sweet treats were available for all to nibble on. Chocolate chip cookie, gold chocolate coins, popcorn, and candies were some of the items on the sweet menu. 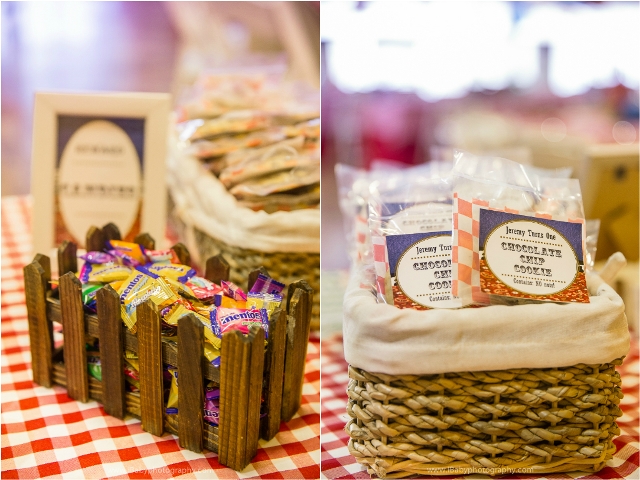 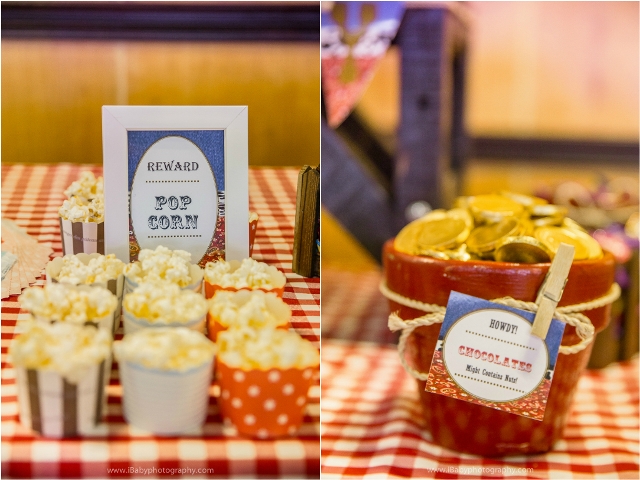 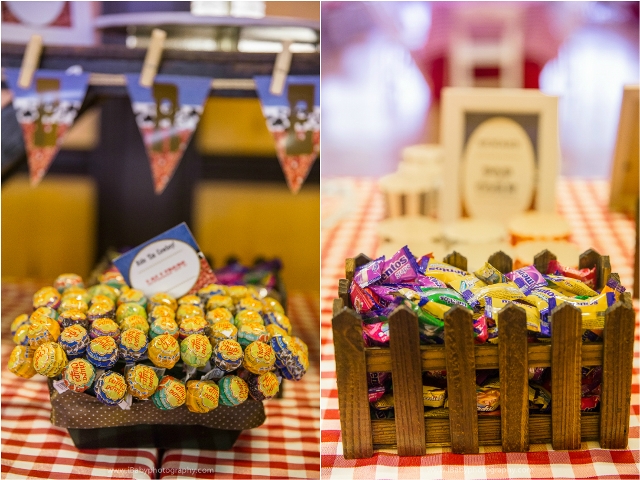 Games such as Bottle Ring Toss and Shooting Gallery were prepared for the toughest little cowhand to enjoy! This is the ultimate hoedown! 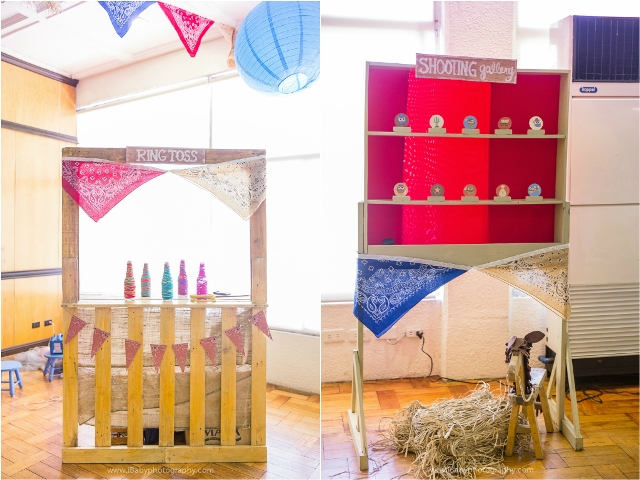 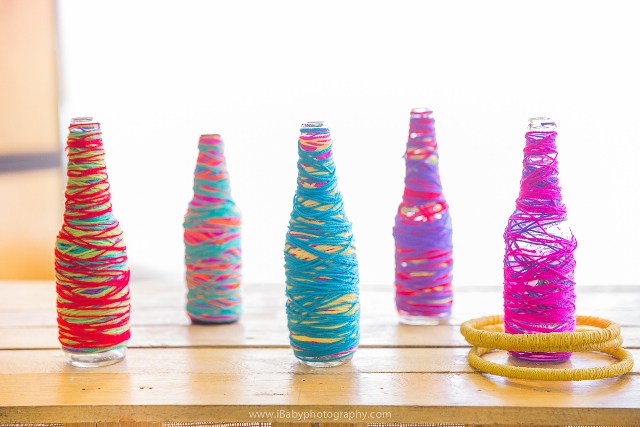 Before the little cowgirls and cowboys rode off into the sunset, these goodie bags were handed out to them. 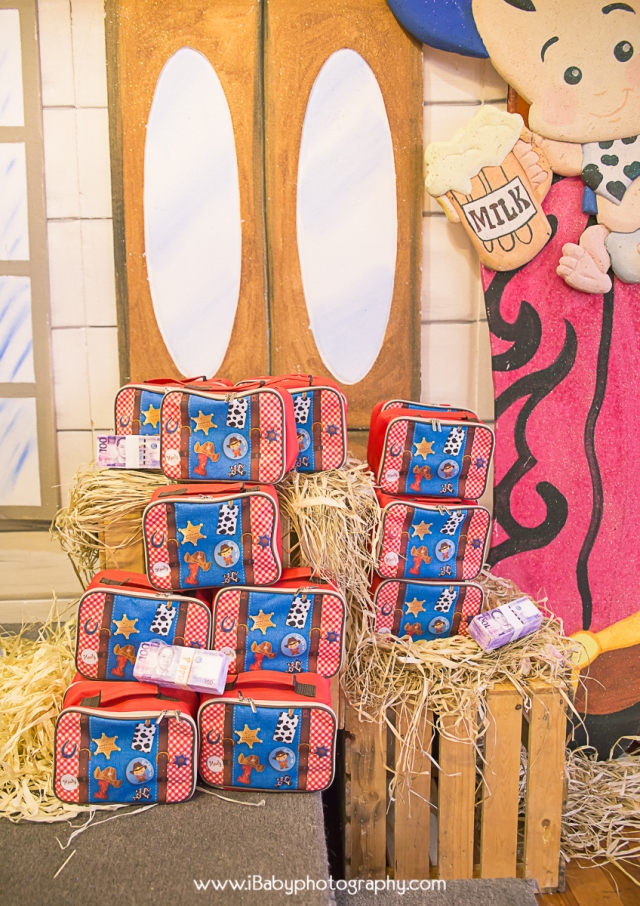 Now this is one cute cowboy! 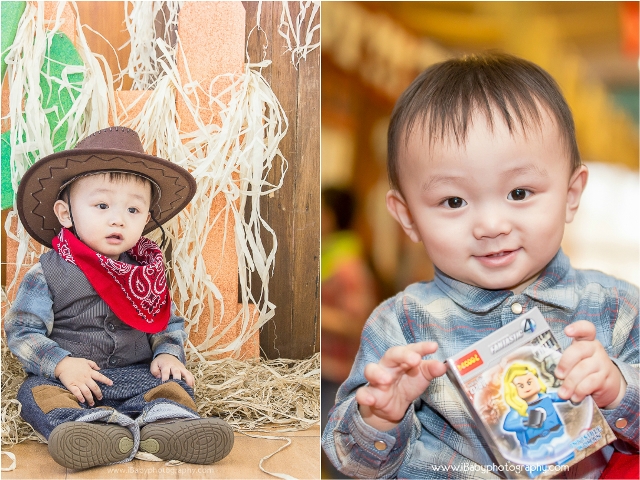 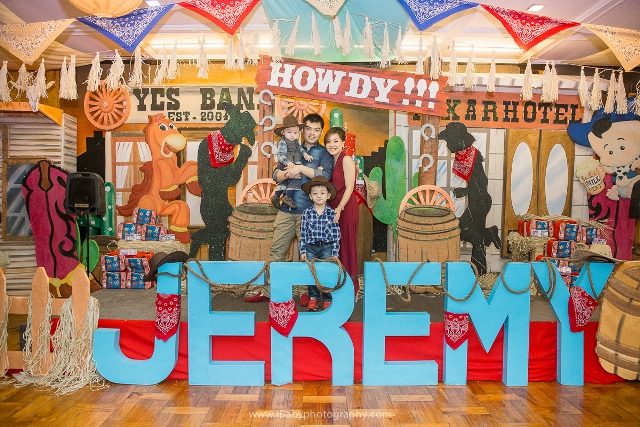