Do you believe in fairy tales? Well, you would after you’ve seen our featured party!

Anjelika’s party fits both for the Royals and the Rebels. Not sure what that means? Okay, here’s a brief background: Ever After High is a boarding school attended by the children of some of the world’s most notable fairytale characters. The Royals are those who believe that everyone should follow what their destiny is, such as Apple White (daughter of Snow White) and Briar Beauty (daughter of Sleeping Beauty). The Rebels, on the other hand, are those who believe that they should create their own destiny, like Raven Queen (daughter of Evil Queen) and Madeline Hatter (daughter of the Mad Hatter).

But whether one is a Royal or a Rebel, I’m sure everyone would agree that this party has set a new high. It was nothing short of spellbinding! Everything, from all the focal pieces right down to the tiniest detail, was well-thought of and well-executed. With Party Deco as the force behind the designs and style, it wasn’t really a surprise that the venue was so amaaazing. The festive mood was set by bright and striking color palettes and those life-size character standees were really impressive. The scrumptious sweets spread will satisfy not just the taste buds, but the eyes as well.

So, while deciding on whether you’re a Royal or a Rebel, let’s take a peek at this spellabration!

I’m sure mouths went agape, thanks to these beautiful ceiling installments. Pompoms, lanterns and honeycomb balls gave not just different shades of color, but a variety of textures as well. Swags in rich hues were also added to complete the grand ballroom vibe. Notice the key and mirror frames? Pretty cute! 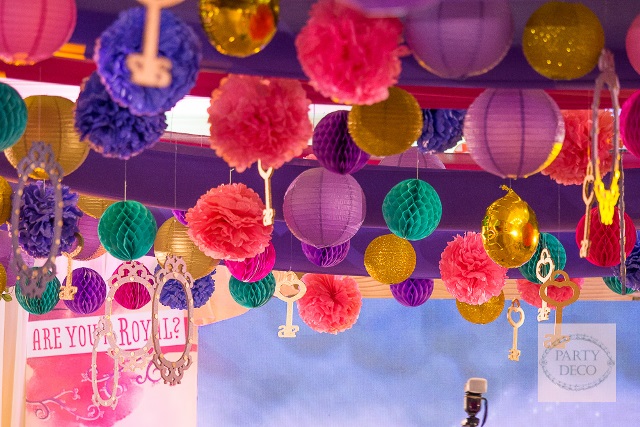 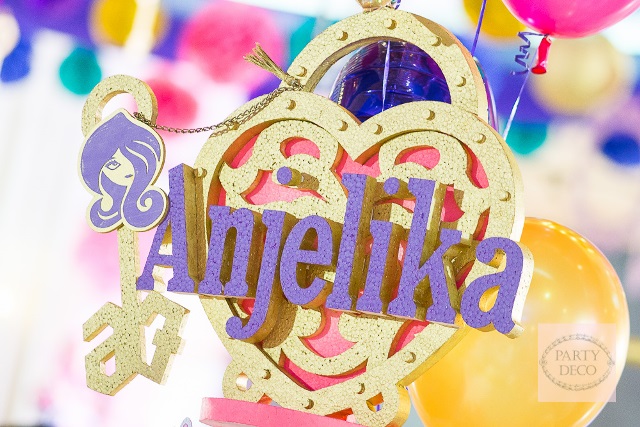 The stage setup was oh-so-fabulous! With Apple, Briar, Raven and Madeline gracing the event, what more could the guests ask for? Yes, they may cause some internal confusion on whether you want to be a Royal or a Rebel. But nothing could be clearer: these fairy tale teenagers look really stunning. 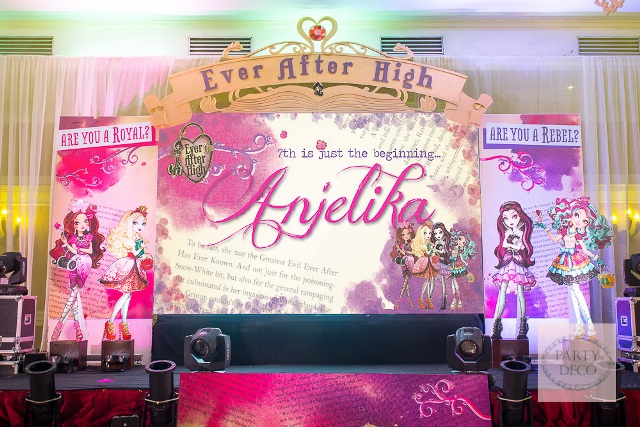 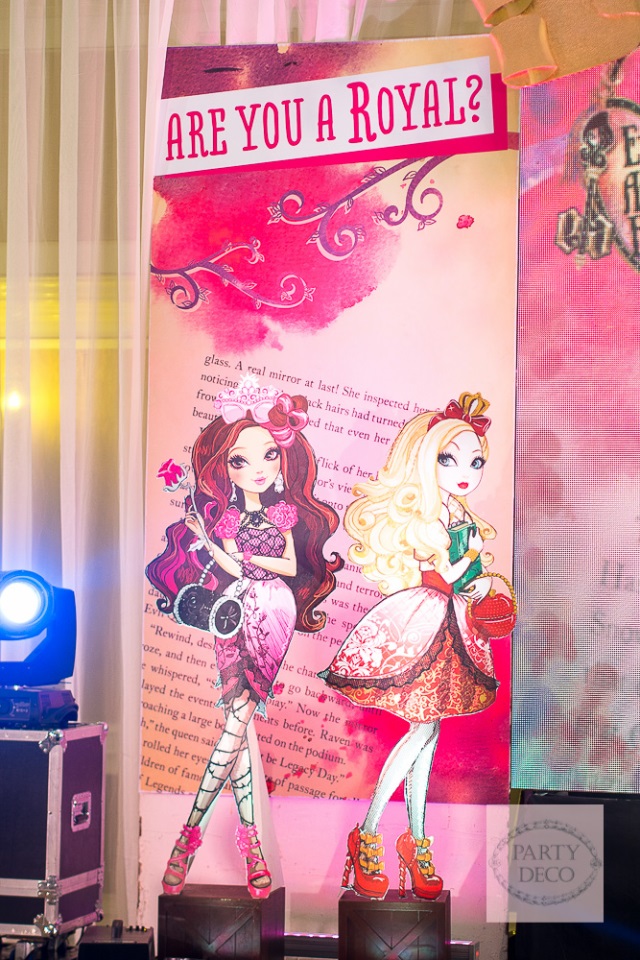 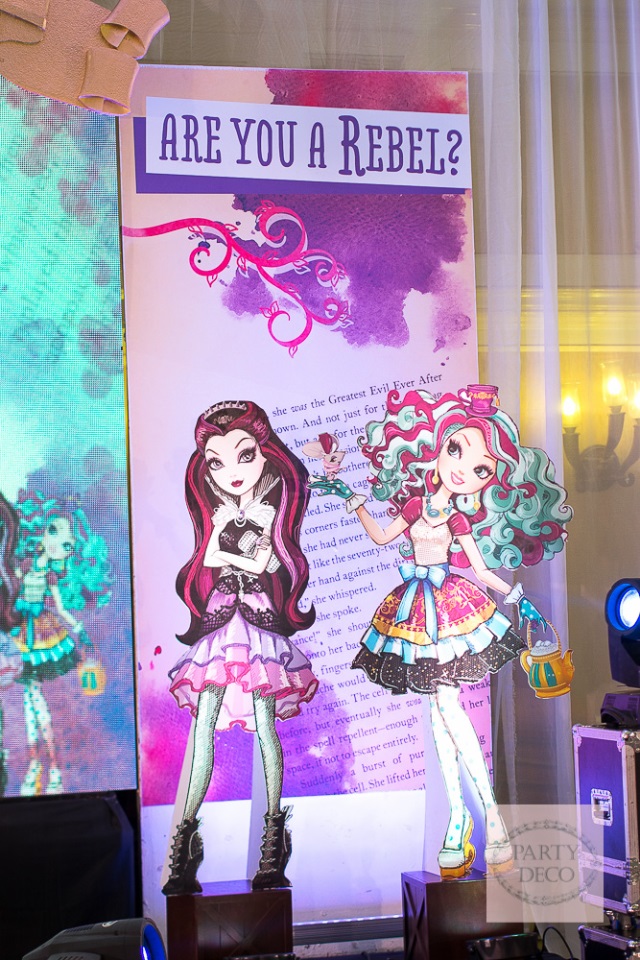 If a competition would be held for the most elaborate table centerpieces, the ones in this fete would be the hands-down winners.

All pieces had our 4 enchanting damsels at the base. Some display an ostentatious bundle of decorative balloons; while others show fancy swirls with fairy tale thingamajigs. What I really like, though, is how the celebrant’s name was painstakingly showcased in these centerpieces. 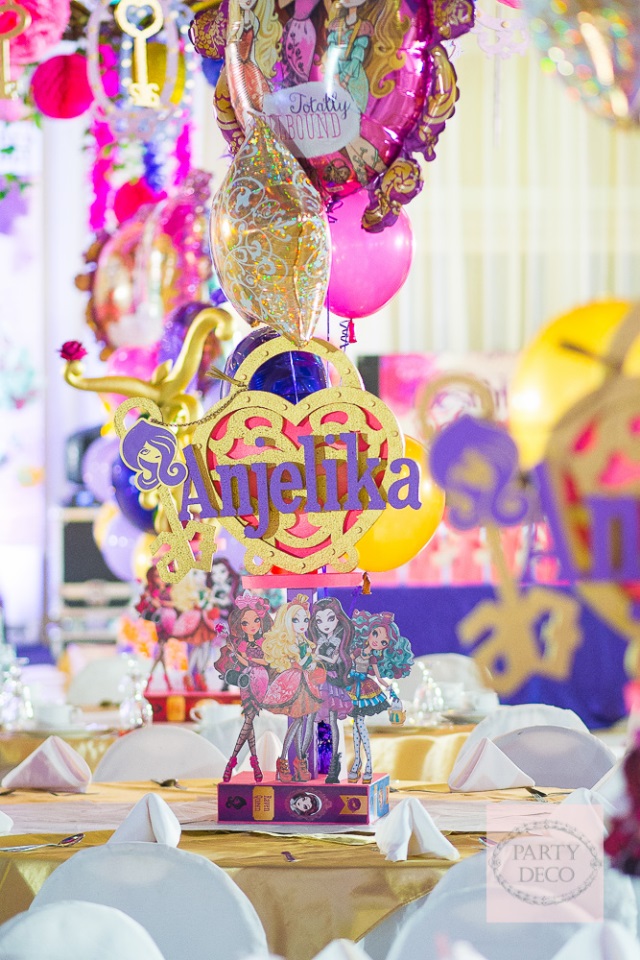 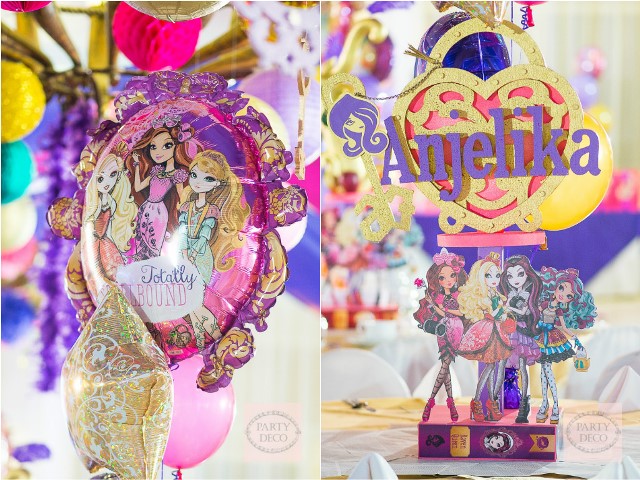 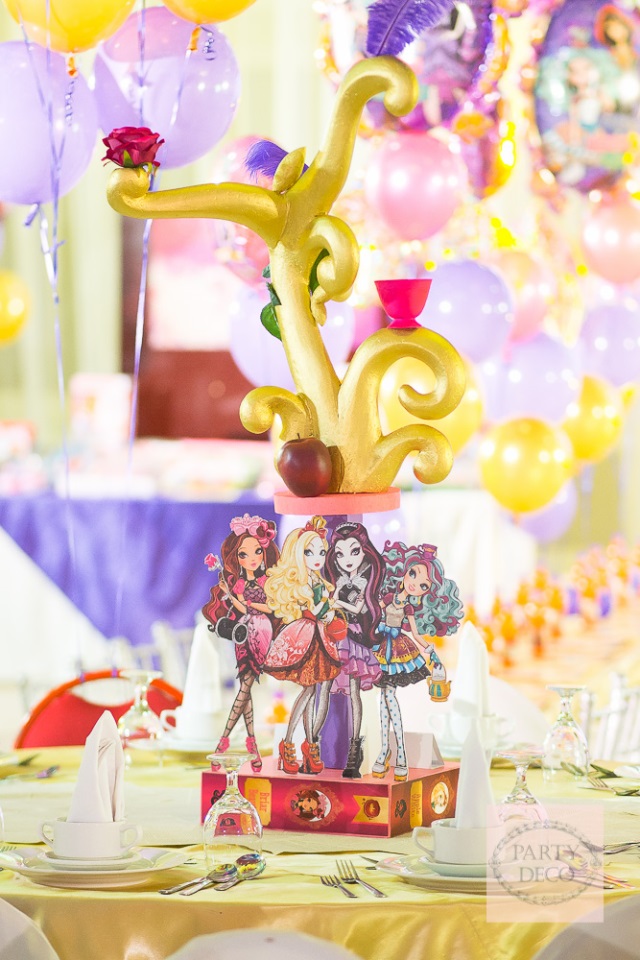 Not to be outdone, the kids’ tables were bustling with uber cute details as well. The place mats and bottle labels were personalized, and the balloon set-up provided oomph to the tablescape. 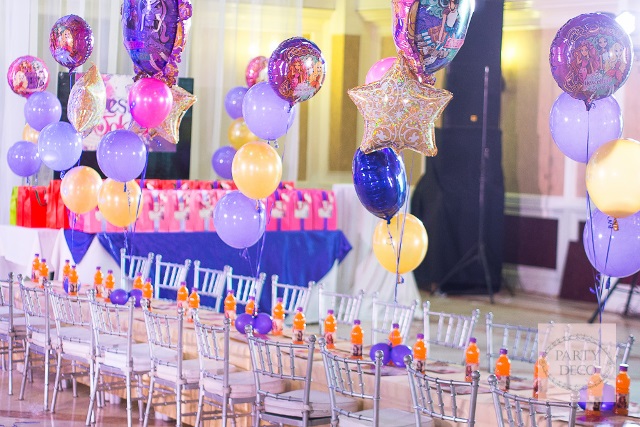 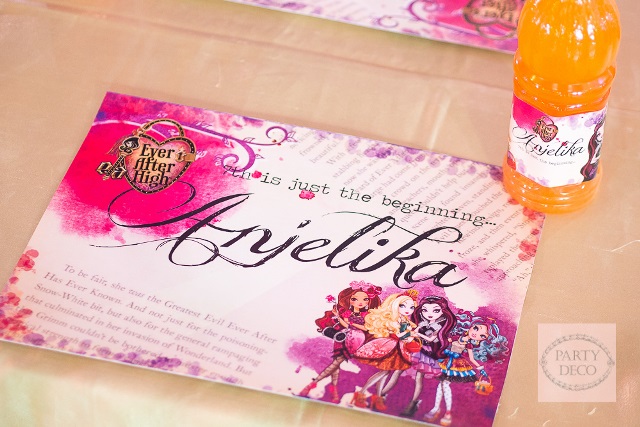 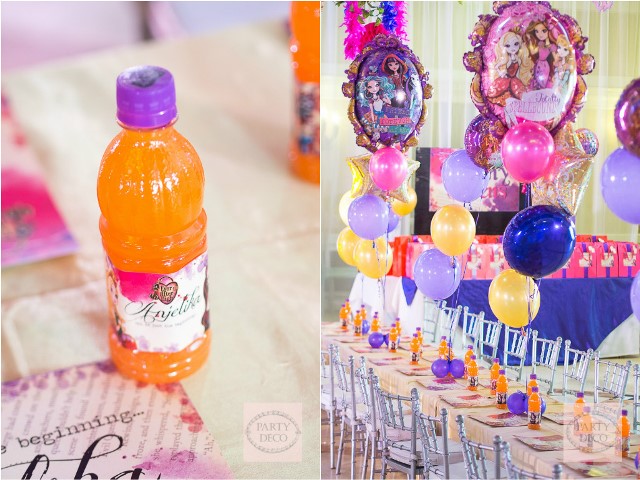 Fit for a Queen! The 3-tier cake was full of intricate trimmings and was adorned in beautiful shades of indigo, pink and lavender. And did anyone misplace their books? The toppers were doll diaries of Anjelika’s favorite Ever After High students: Holly O’Hair, Apple White and Raven Queen. 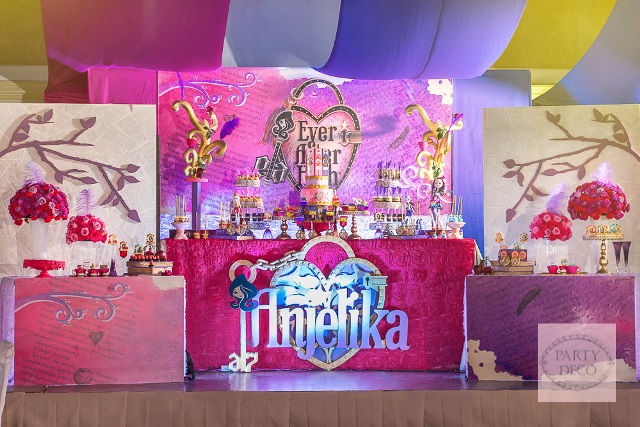 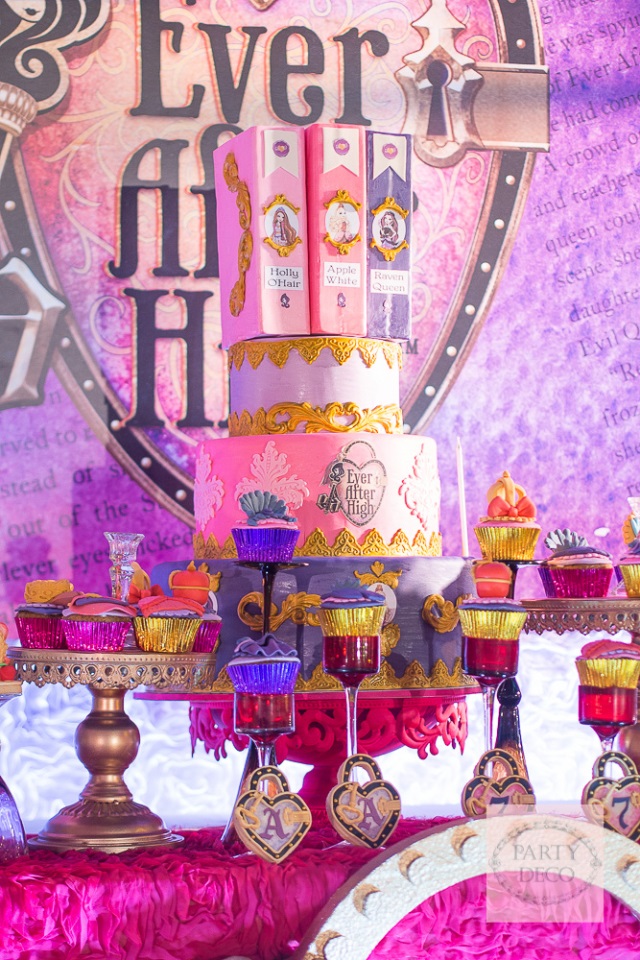 Are you captivated yet? You sure would be, once you’ve seen the sweets station. I love that they prepared desserts in line with both the Royals and the Rebels, which means you don’t have to pick which side you’re on. So whether you want to follow your fairy tale destiny like Apple White, or you want to make your own happy ever after like Raven Queen, feel free to indulge with these mouth-watering, sinful treats. Sugar cookie diaries, tea party macaroons, crowned cake pops, apple fudge, feathered custard cakes…all those details, darling! The Ambrosian gods must be smiling from wherever they are. 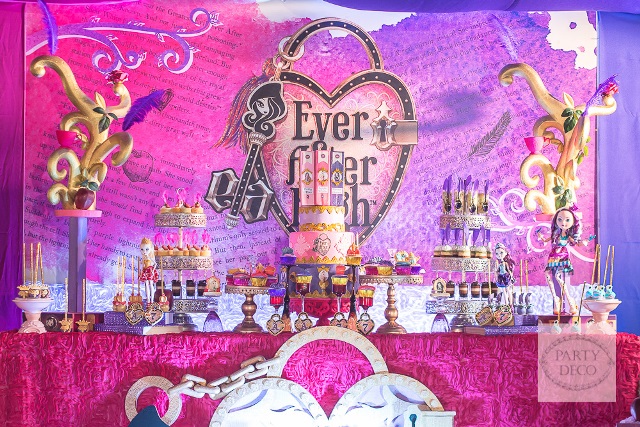 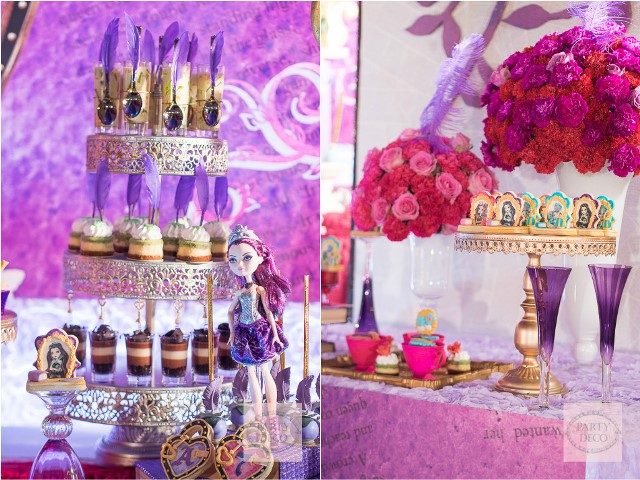 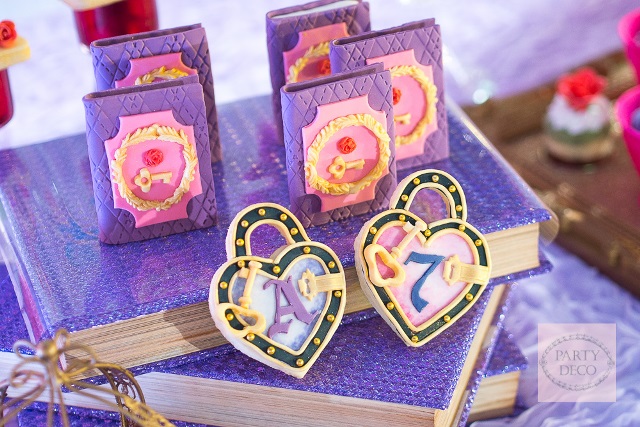 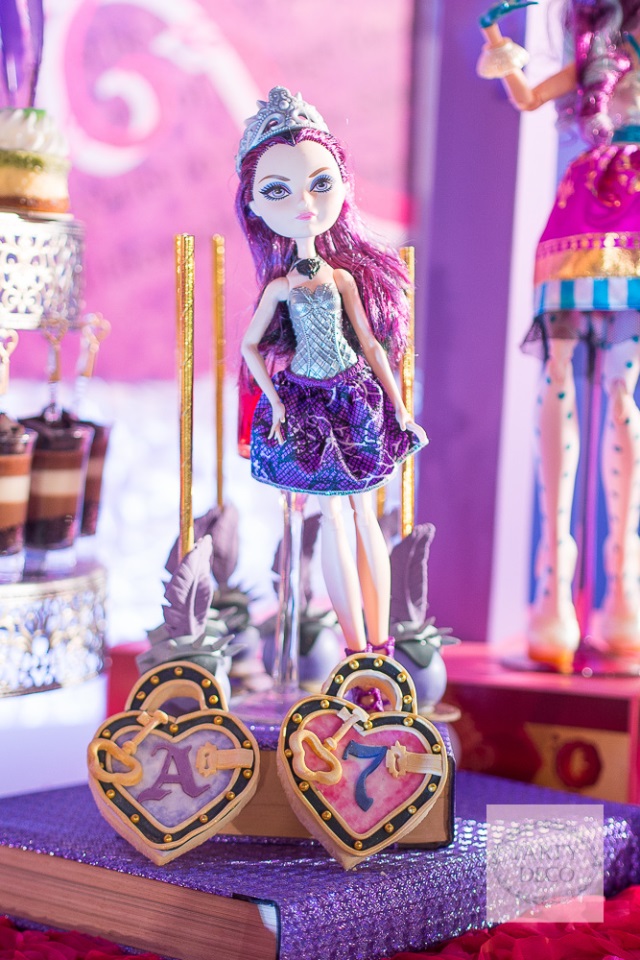 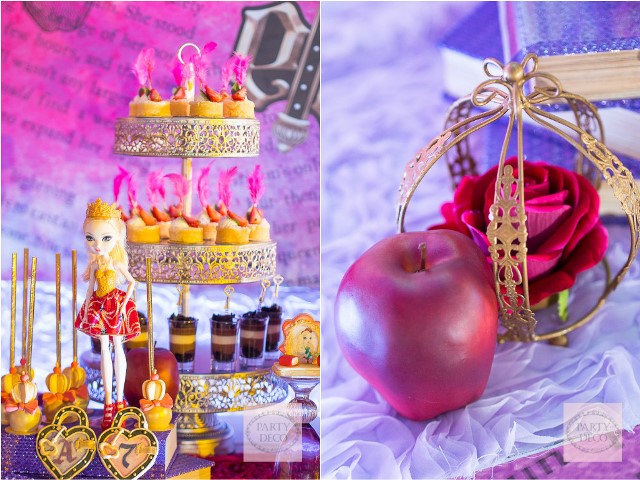 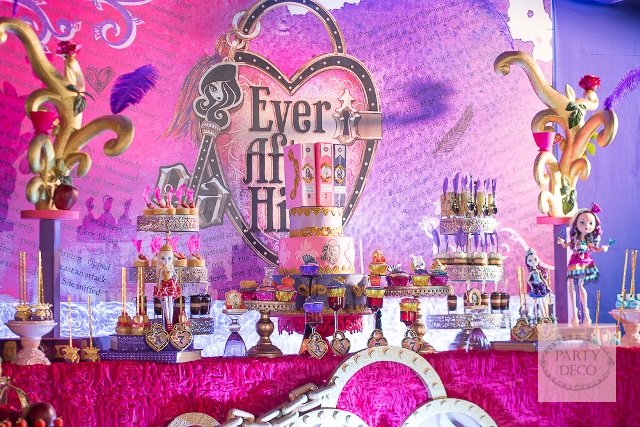 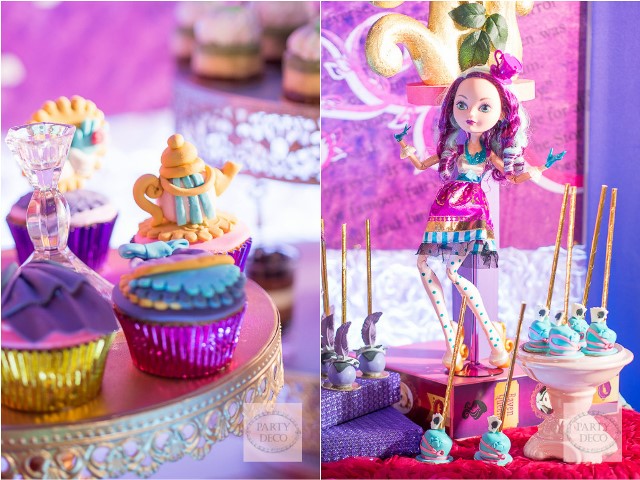 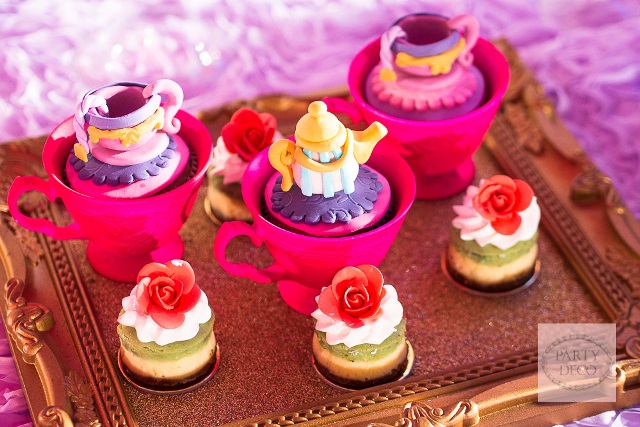 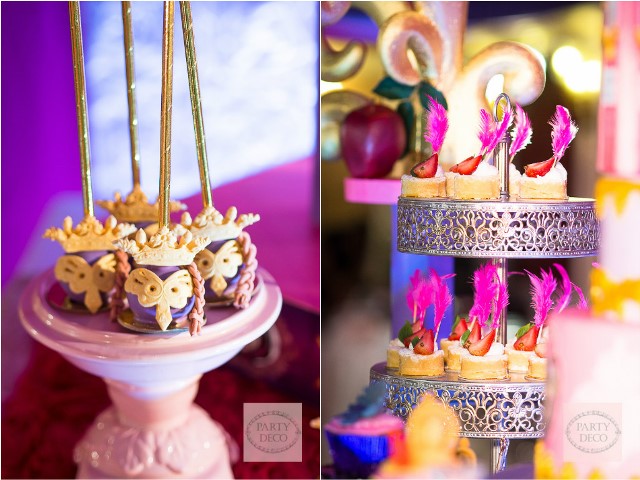 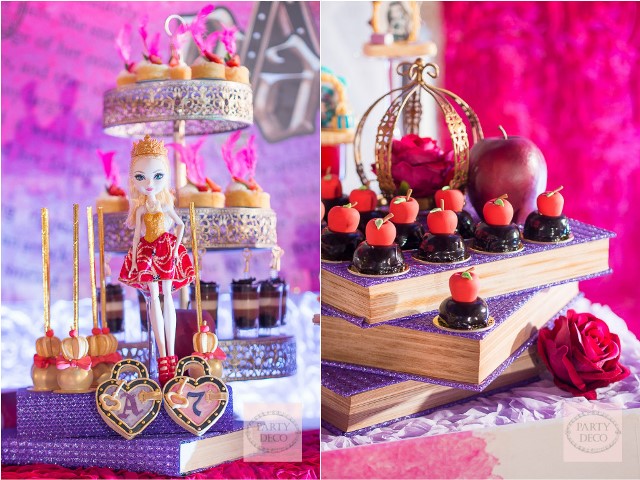 Pose with your favorite storybook descendants in this dazzling photo area. Be a next-in-line princess with Apple and Briar or be wickedly cool like Raven and Madeline. Oh, and don’t forget that charming smile! 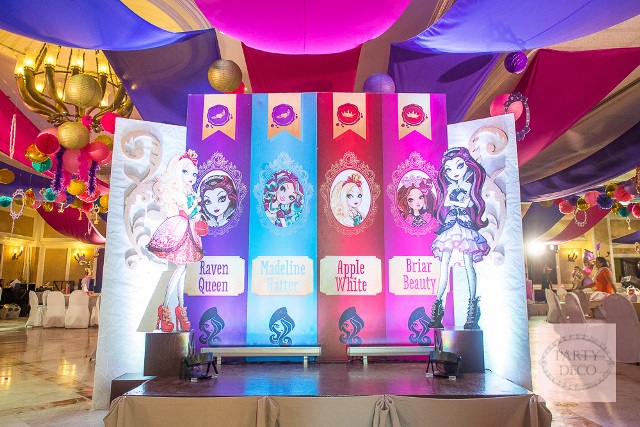 Royal gifts abound for our guests of eminence! 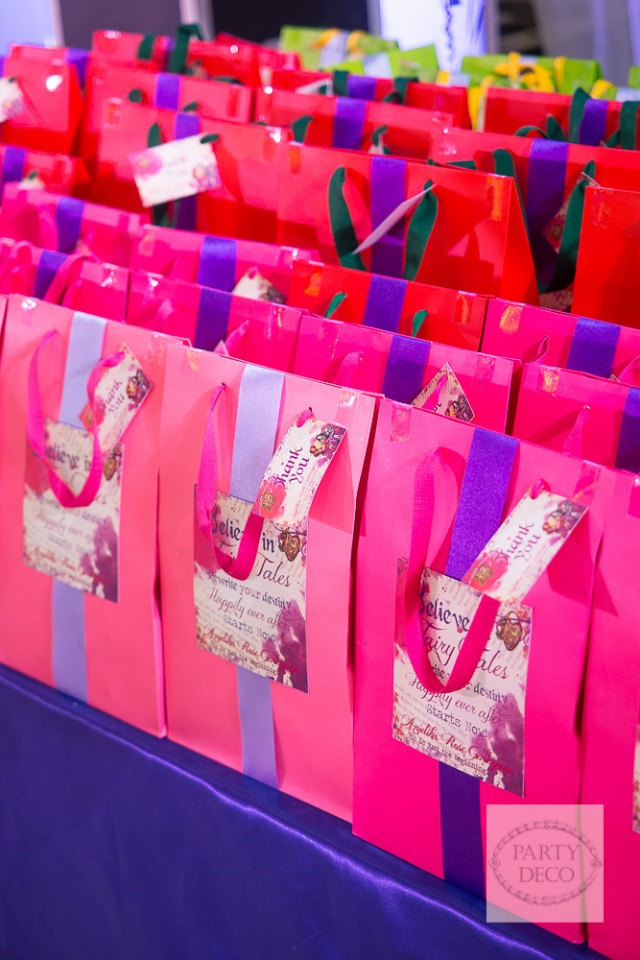