Every boy’s dream is to become a superhero – fighting crimes, chasing bad guys, and of course, saving people, all while wearing cool costumes and awesome gadgets! Our featured party is totally action-packed, as superheroes came out to celebrate Alriq’s first birthday BANG, I mean, bash! Even Superman and Batman are in league with each other! Our kid hero’s party of epic proportions was the brainchild of party maven, Ava’s Cake and Events. Captured through the lenses of Pop Manuel, everyone truly enjoyed the celebration, especially the young ones! So, what are we waiting for? Evil villains? World domination? Time’s a-ticking, tick-tock-tick-tock!

A superhero will always know where to go, but a little directions can be a big help to save the day. Where to go, where to go, Bat Cave or Candy Vault? Hmmm. But first, pick a cape and be your own hero! 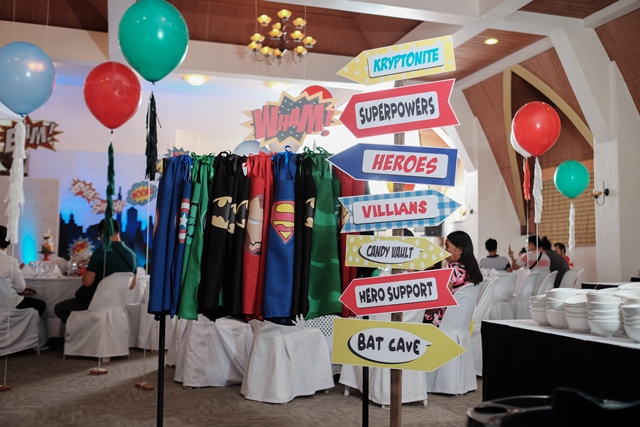 The caped crusader has to start somewhere, right? Check out Alriq’s photo wall as he grows from zero to hero! 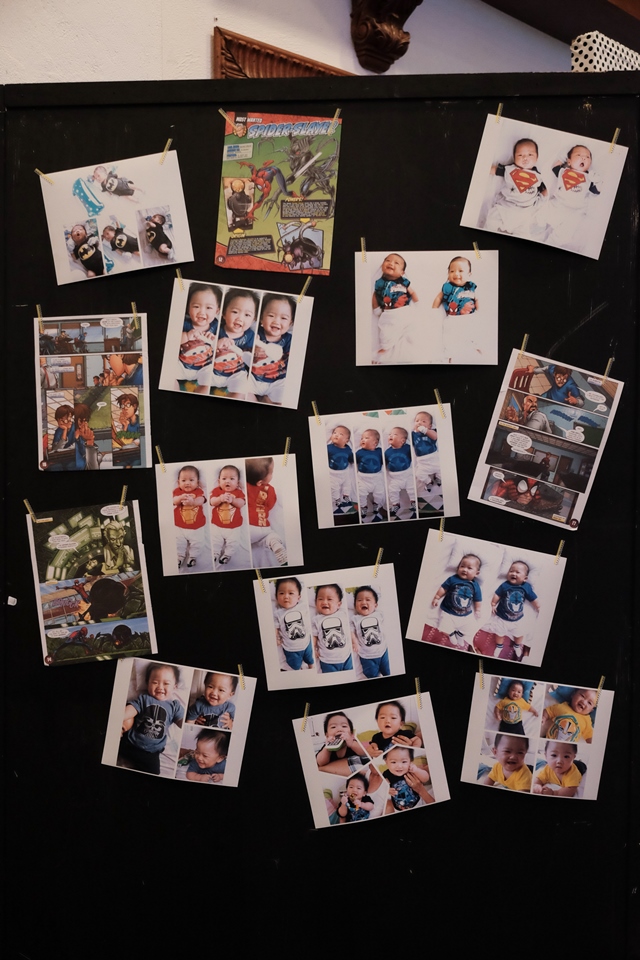 Excitement is all-around as comic book expressions KAPOW-ed their way from the ceiling. Amidst the WHAM! KRUNCH! and ZOOM!, balloons in red, green, and white added some pop in the venue. 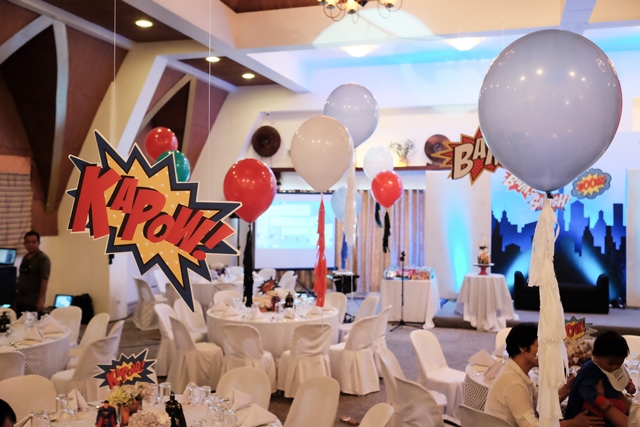 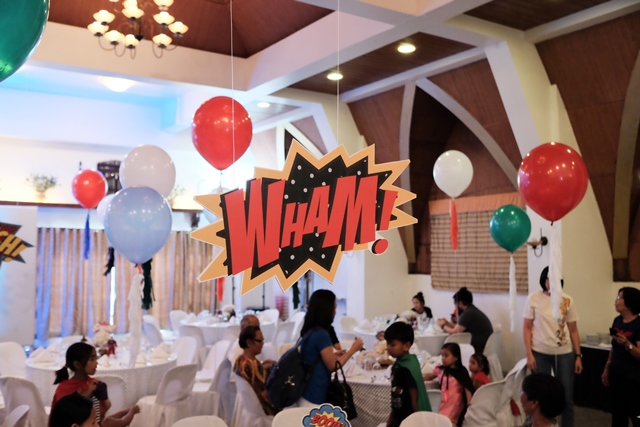 Spot the tiny black polka dots all over the place that’s absolutely comics-inspired, just like pixels! Totally loved this detail.

The embattled city can only call for one hero, and it’s our boy wonder! I absolutely loved the stage deets with dark cityscape silhouette and Bat-signal that said “ALRIQ”. Will he truly save us? 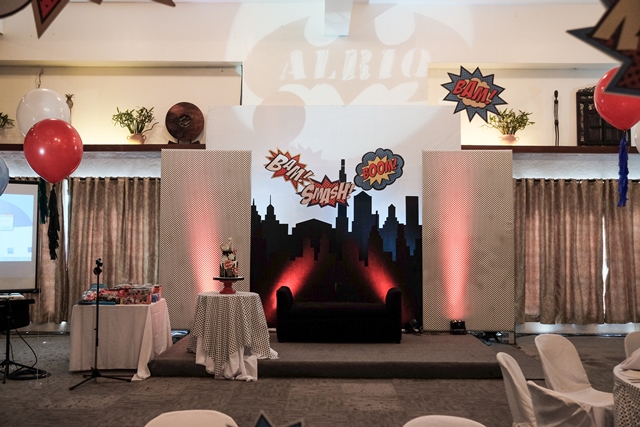 Despite the toned down, classy table setting, superhero action figures still kept up the playful vibe in the setup. Kids with imagination surely had a ball playing out epic battles between Batman and Superman in their minds! 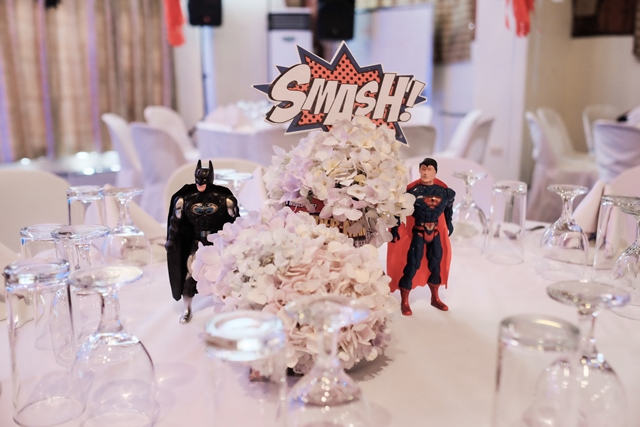 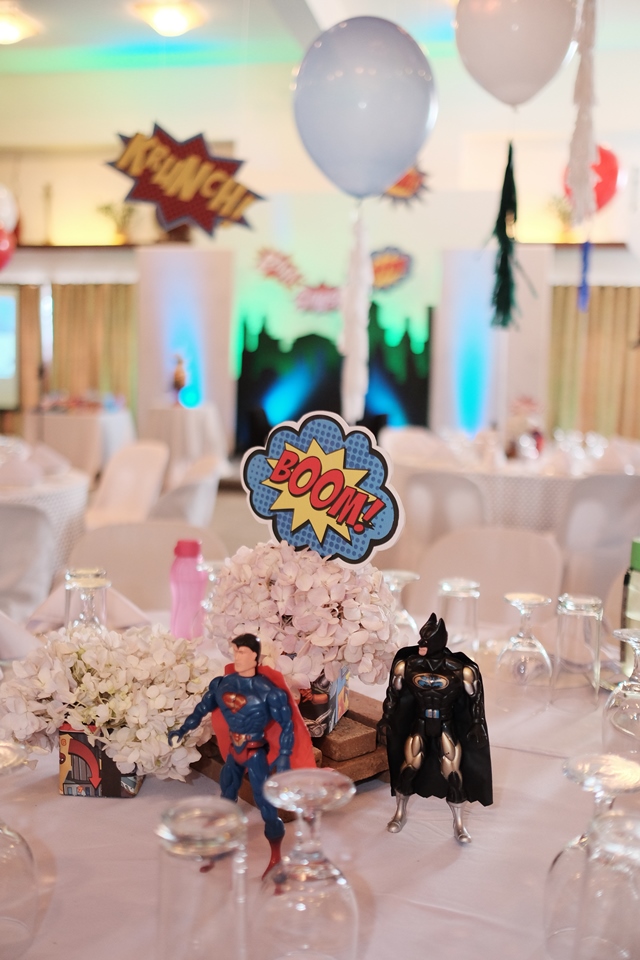 Ah, the masterpiece in the day’s event! You got to give it to Ava’s Cakes! They certainly outdid themselves in this 2-tiered confection decorated like a city at night, when the evil lurks in the alleyways! I love how comic book bubbles made the cake more eye-catching than it is! 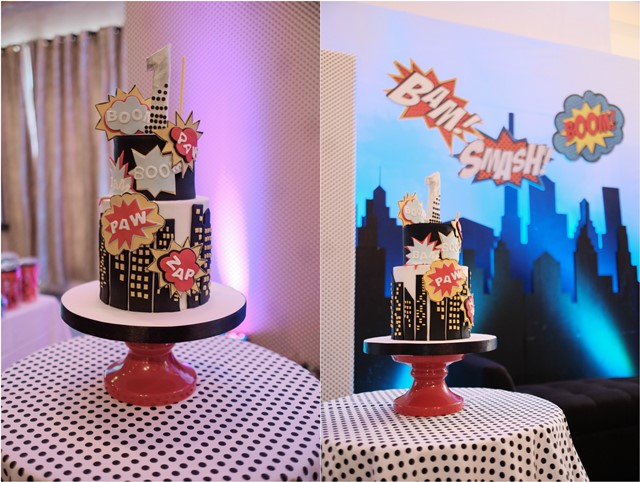 What better way to fuel a hero that’s on the go? Of course, with cupcakes, mallow pops, and cookies, all tastefully done in today’s theme by Ava’s as well! 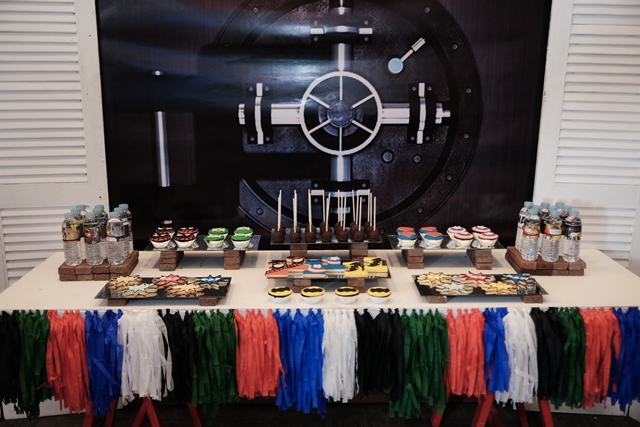 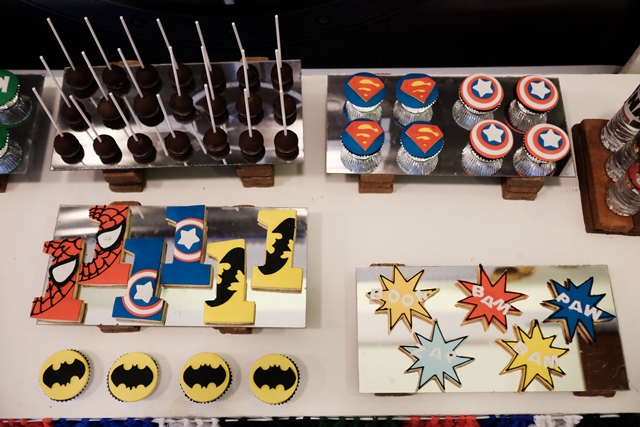 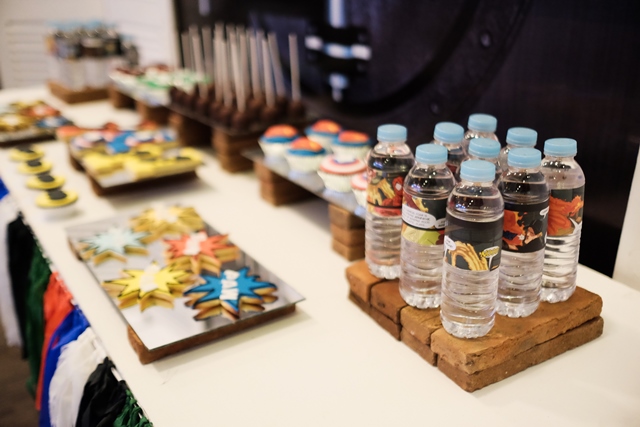 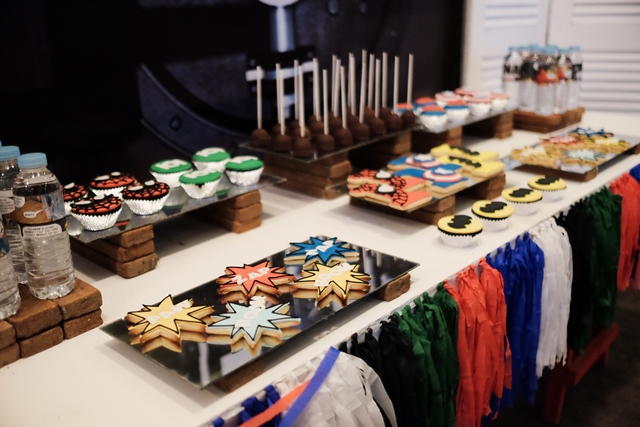 Crime-fighting makes one really hungry, so they put together a lip-smacking snack bar. Grab some biscuit sticks, cheese puffs, and chocolates. Mix them altogether to get a power up until you’re ready for more adventures! 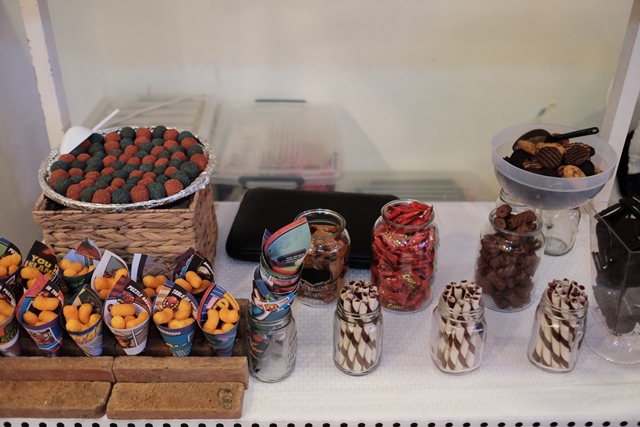 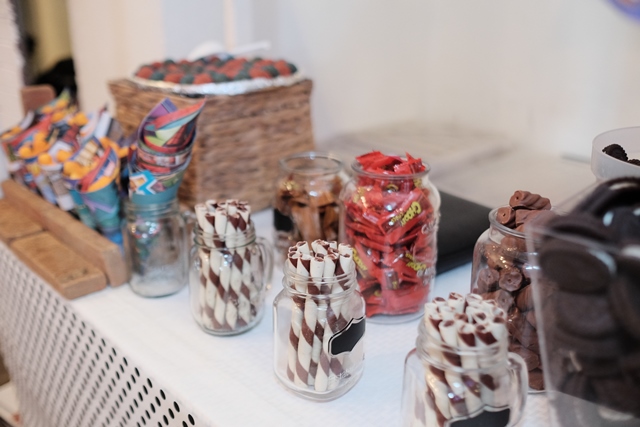 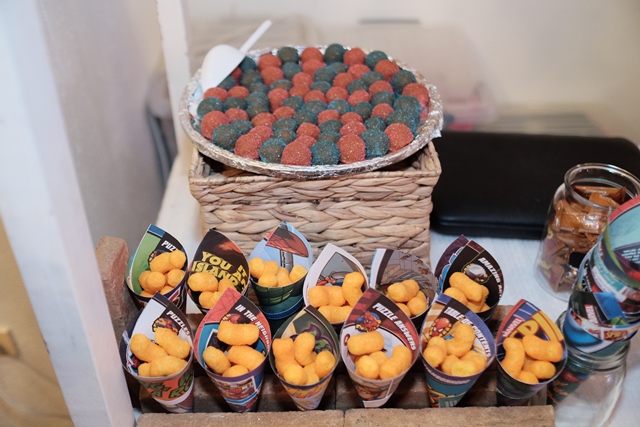 Of course, entertainment was courtesy of party planner, The Little Bucket. A bit of trickery from a master magician, eh? Uh-oh, we hope he’s not a villain! 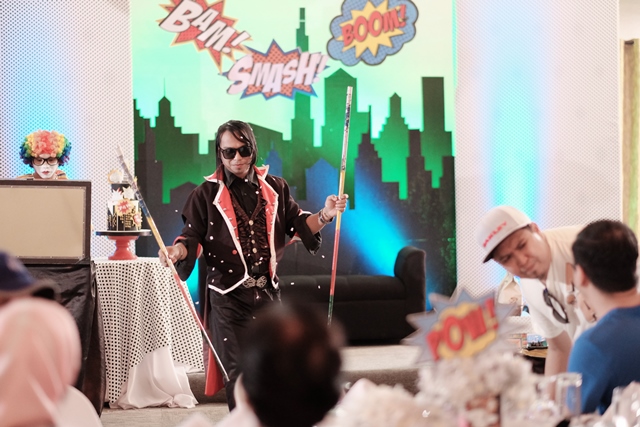 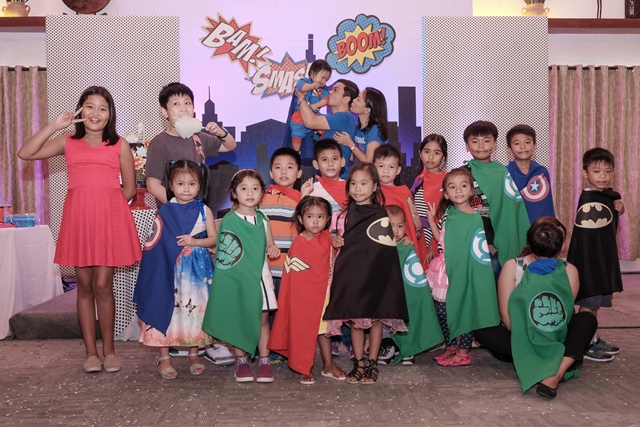 Youngsters didn’t have to go home empty-handed as they gave out goodies with comic book-inspired thank you tags. Of course, a superhero has to be thanked properly, don’t you agree? 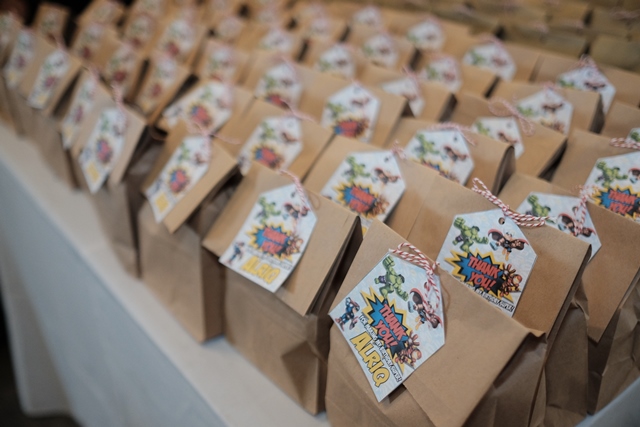 The whole family assembled to make the supercharged birthday bash a success. It was an affair one for the (comic) books! WHAM! POW! 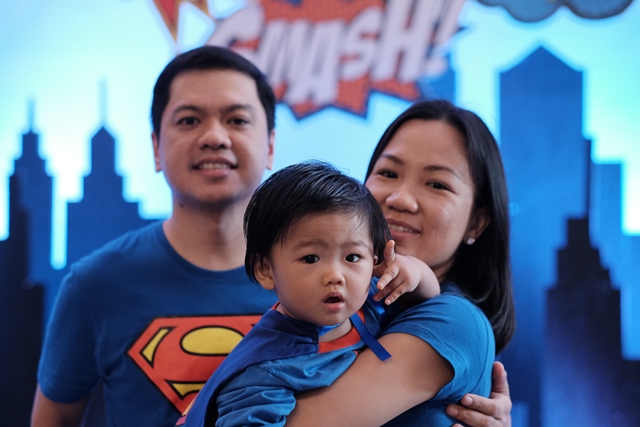 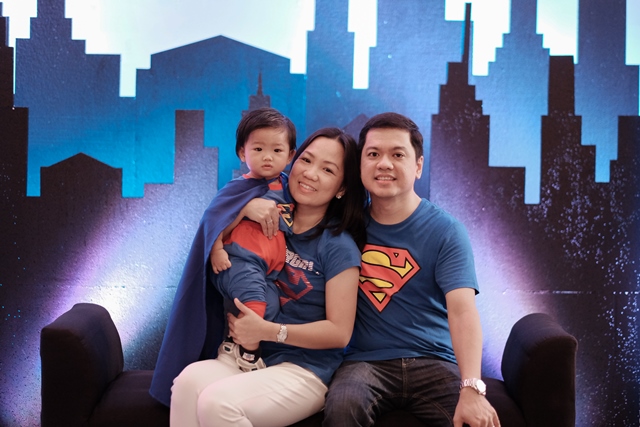 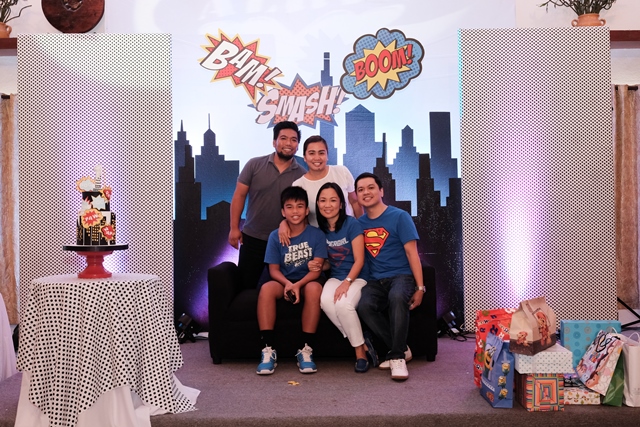