Ready for another space adventure? If you’re a regular viewer of Disney Junior Channel, chances are you’ve seen this new show – Miles from Tomorrowland. Following the Callisto family’s inter-galactic journey, the show features their adventure-filled space exploration through the different planets while meeting new friends along the way. Basically, this show got 2 magic words that will instantly capture any kid’s attention – fun space adventure and wacky characters! No wonder this show easily got the hearts of little boys and girls everywhere making this theme a perfect candidate for your little ones birthday party. I’m sure with today’s party feature, you can pick up lots of out of this world ideas on how to make this theme BLAST-astic!

For Jaime’s super stellar birthday bash, Khim of Party Deco impeccably showcases the out of this world details and fun characters of the show with her signature uber fabulous dessert spread. What’s not to love? From the ceiling to their table setup, photo-op installation and every sweet little morsel, they really took their guests on a fun trip to outer space! So why don’t we hop aboard to Stellosphere and begin our journey to Jaime’s cool party.

To give us a glimpse on what went on during the planning stage of Jaime’s party, here’s Mommy Luna’s short write-up on the event:

“Jaime will be turning 3 soon so we decided to have an advance celebration for him when we’re on holiday to visit my grandparents. Nowadays, Jaime loves Miles from Tomorrowland thus the theme of this celebration. At home, he would usually dance while singing “We’re counting down. The engines on. The time is now to rocket. Rocket. Rocket. Rocket.” It’s our favourite Disney show these days.

The color theme is violet, green, orange and dark blue, as always I love how Khim Cruz of Party Deco styled the party. MERC was superstellar!

There were two things which made this celebration extra special. First was that all the table centrepieces used were Jaime’s toys – Miles from Tomorrowland Lego, plush Miles & MERC, and the Exo-plex. Second is the “other dessert table” which were cakes for Jaime’s grandmother & great grandparents.”

First things first, creating the perfect outer space ambiance is a must for this theme. So for Jaime’s party, they filled the ceiling with different details to make this happen. Specifically, stars and moon balloons, Miles from Tomorrowland inspired colored lanterns and some hexagonal shaped ceiling drop. 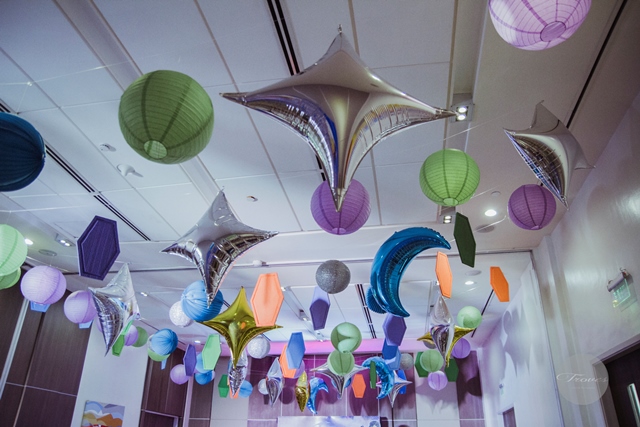 For their main setup, Jaime’s dessert tablescape did the job perfectly. I love how Party Deco always, always, always make a Pinterest-worthy dessert spread! It’s so hard to pick a favorite and actually eat it. #fact

Featuring an amazing mix of 3D character cupcakes, planet cakepops, alien cupcakes and Stellosphere sugar cookies, everything in this table looks out of this world blastastic! This set also features Miles and his robotic ostrich pet, Merch on the sides. 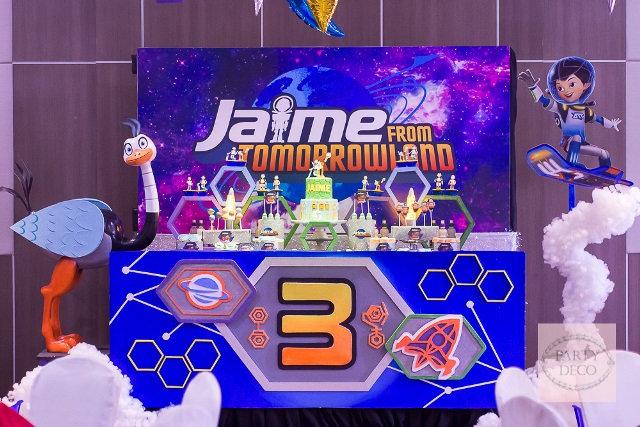 Zooming in to take a closer look on these lovely sweet treats, check out all those sugar details! I love how they brought the different characters to life and made them edible too. *teehee! A great way to tie-in the party to its theme is to have wonderfully crafted desserts. 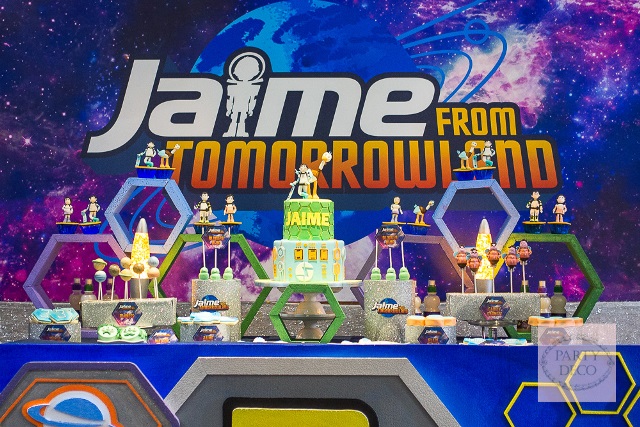 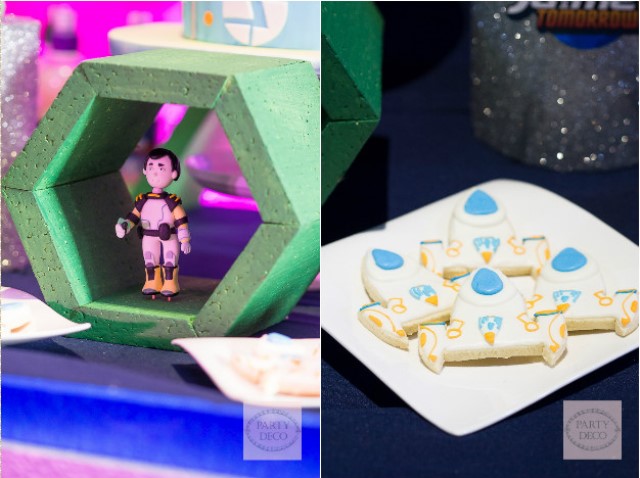 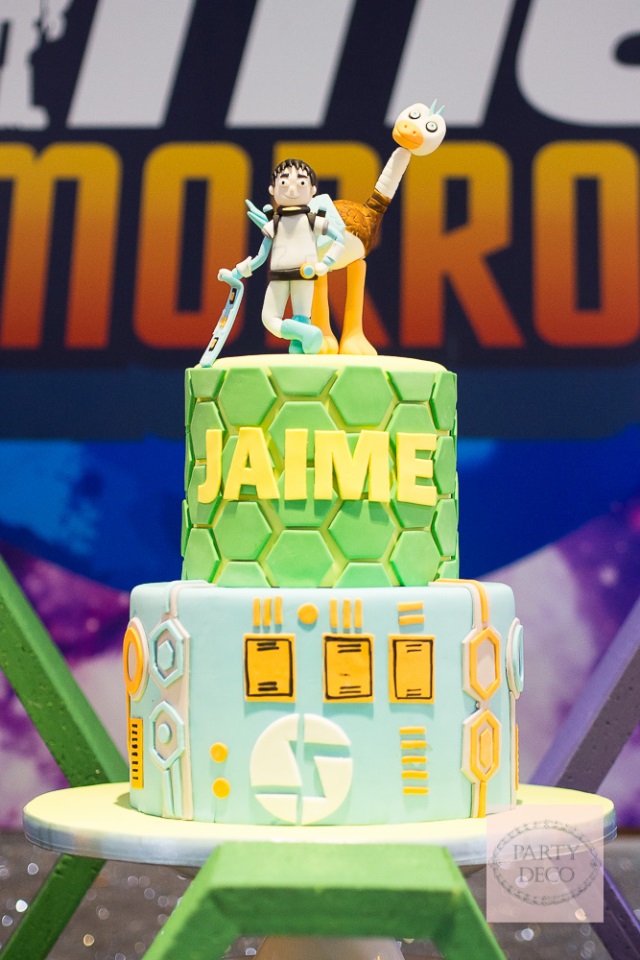 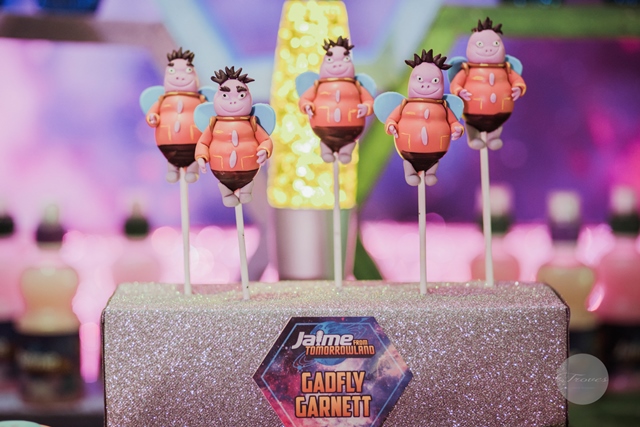 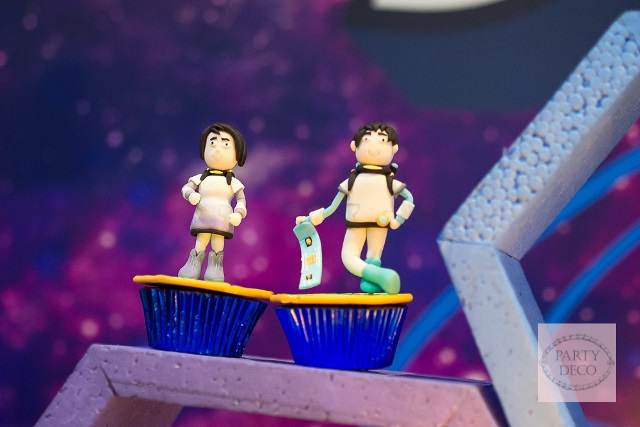 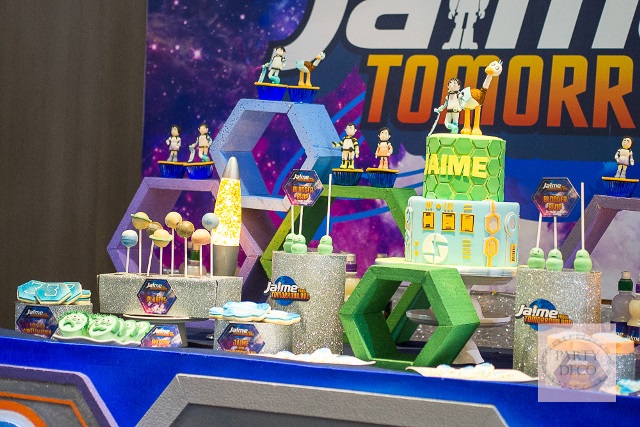 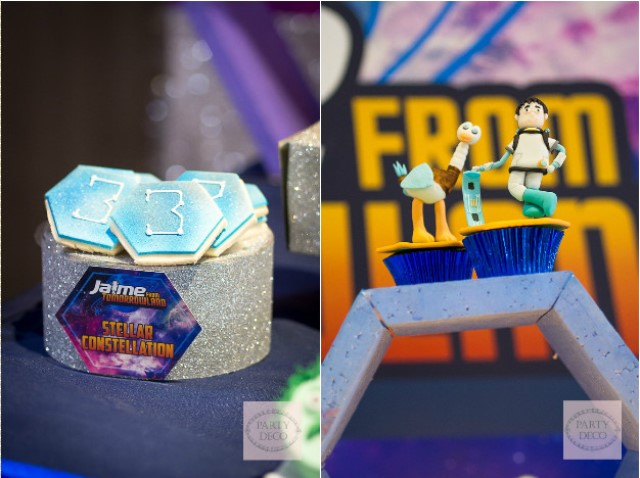 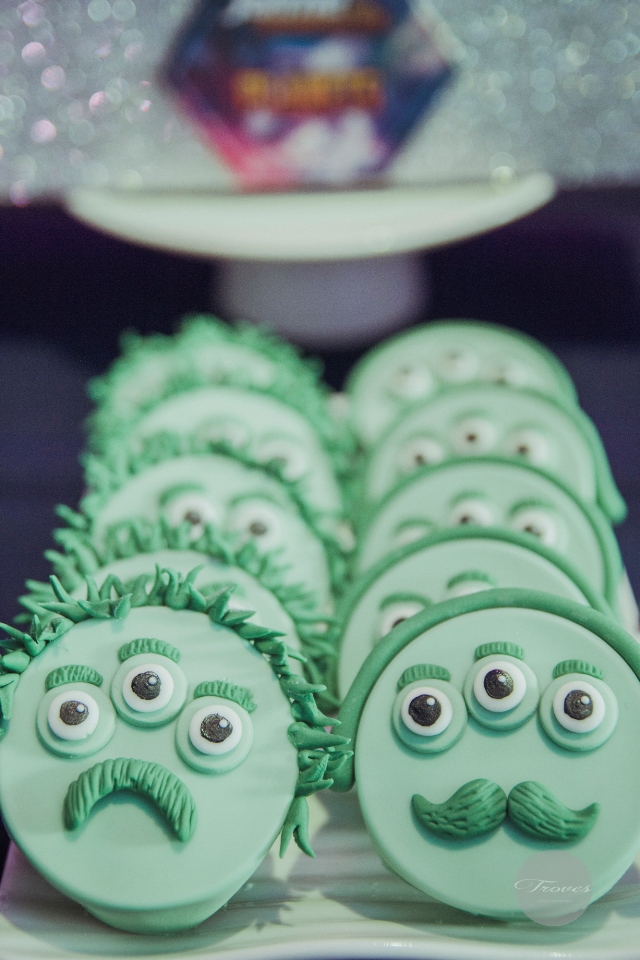 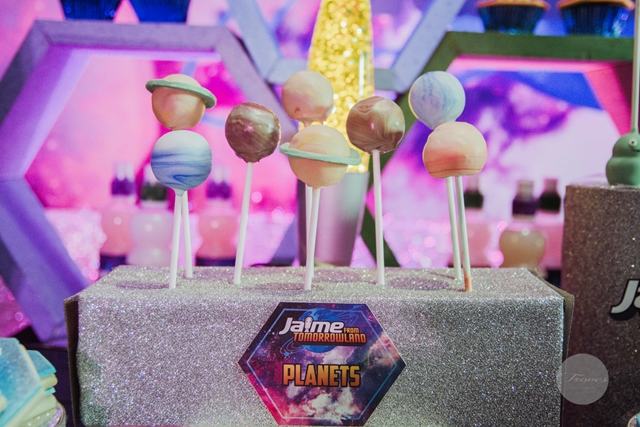 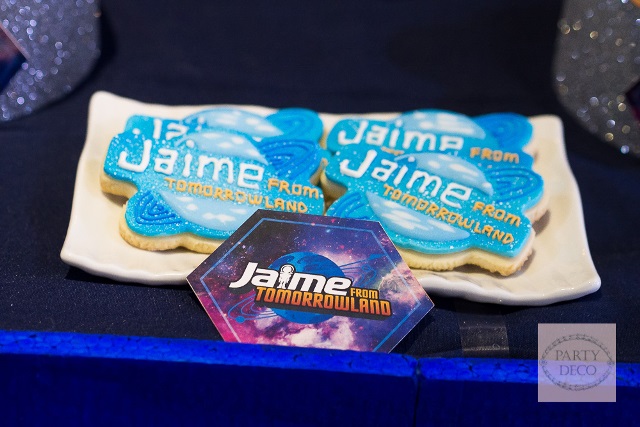 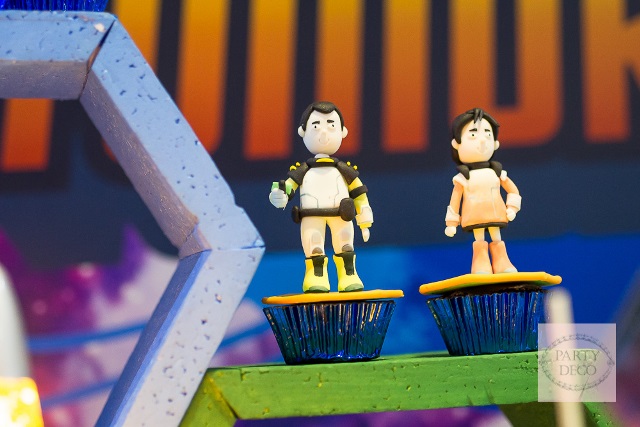 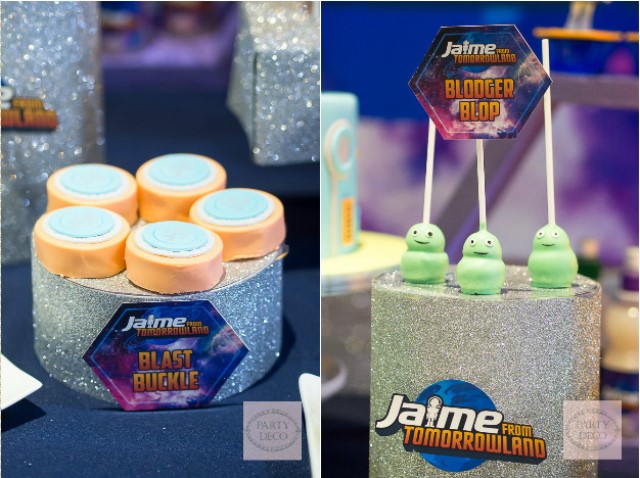 Different Miles from Tomorrowland toys were used as their table centerpiece. To give it a more party-party spin, balloons were added to complete the look. 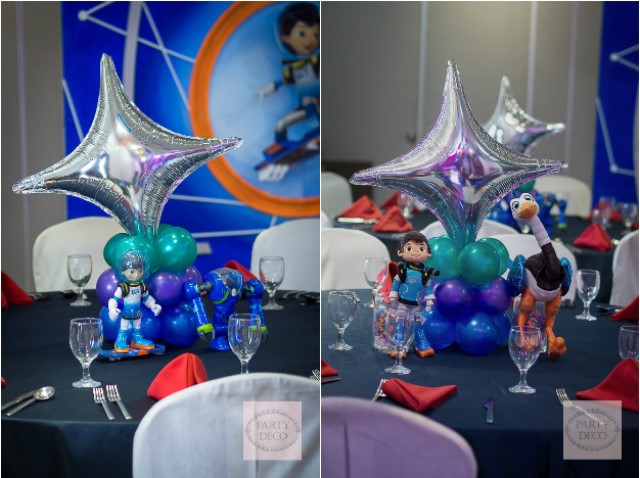 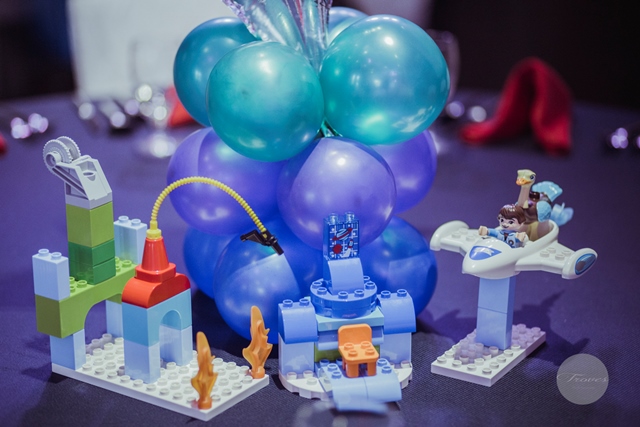 Hexagonal themed placemats and space drinks were provided for the little space cadets. 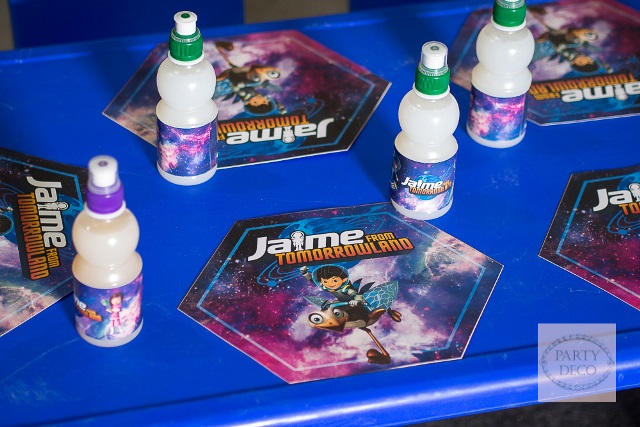 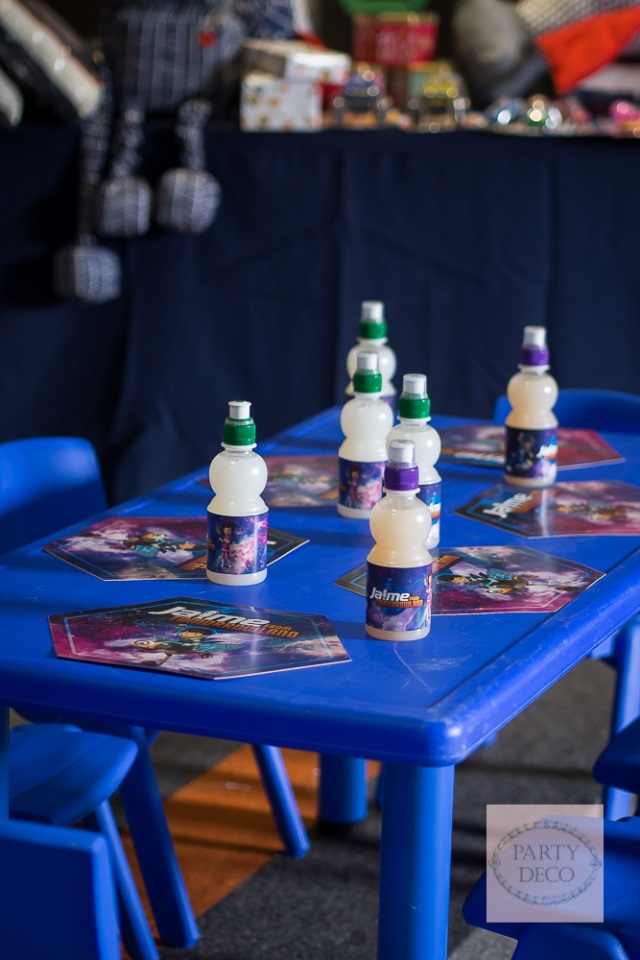 Both kids and adults had a blast playing games and winning those awesome space-themed prizes. 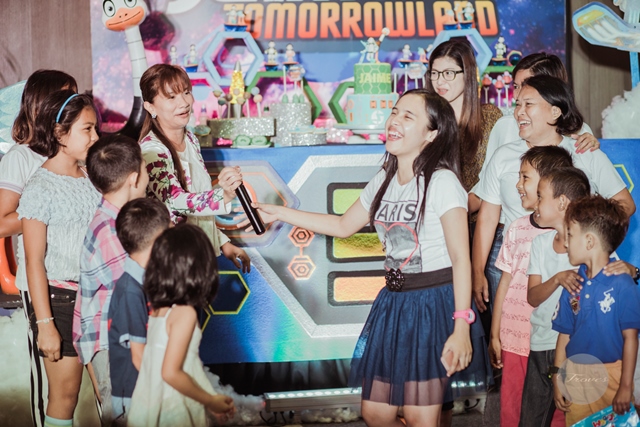 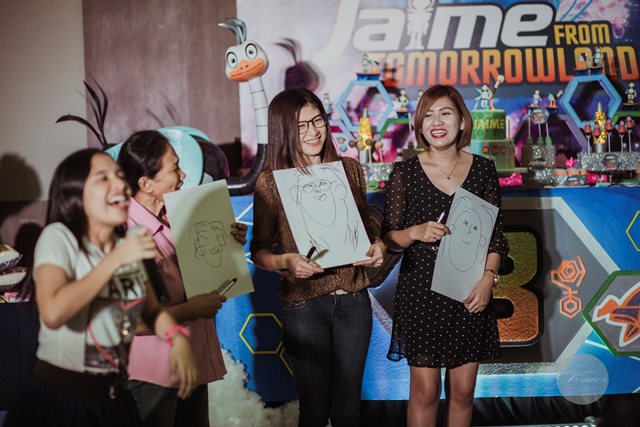 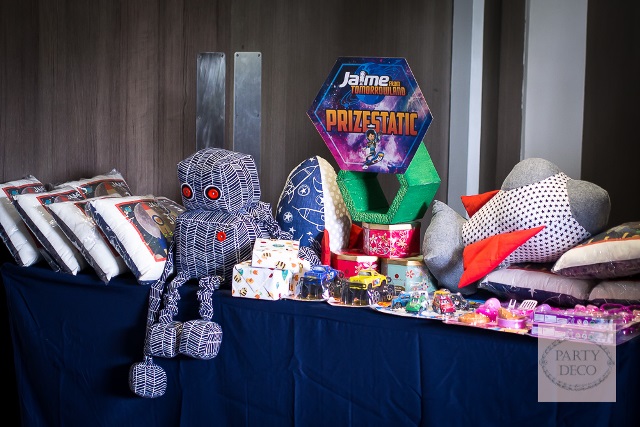 Aside from the dessert spread, this photo-op wall provides an awesome backdrop for their souvenir snaps. Say cheese! 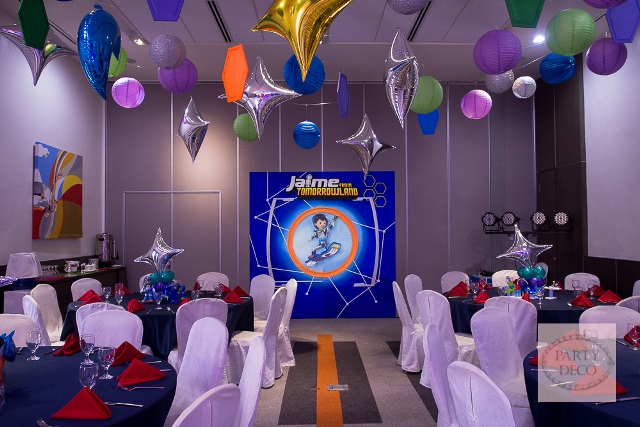 Loot rockets, anyone? These goodies served as their giveaways. 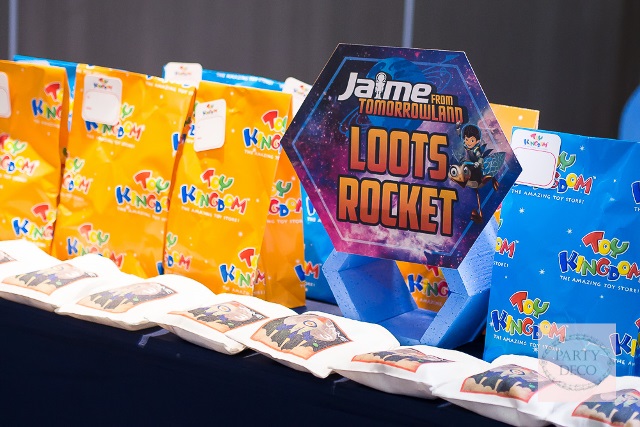 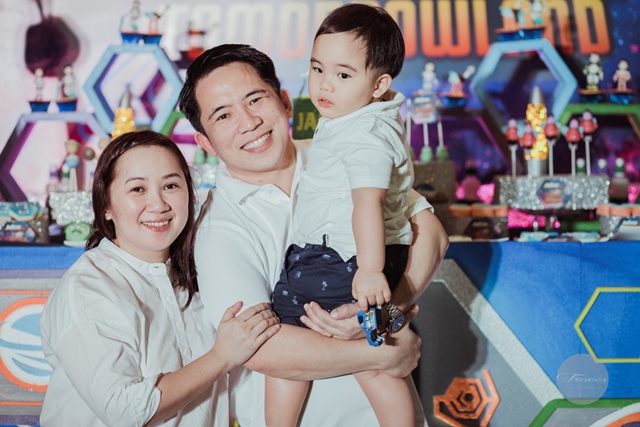 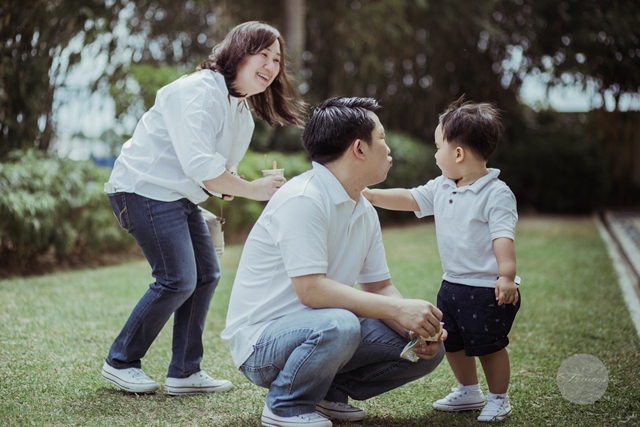