People’s fascination with dinosaurs is undeniable. Such is the allure of these now extinct creatures that many young boys would know them by heart. It’s no wonder that enterprising filmmakers produced adorable animated movies like The Land Before Time, a film still loved by children around the world up to this day. Carl’s parents and the events team from Party Divas PH must have enjoyed this film in their youth because they pulled off a charming “dino-mite” celebration for Carl’s 1st birthday! Thanks to Spongecake Studio’s for these amazing photos.

At the entrance, Carl’s guests received a heart-warming welcome with a gallery of his photos from birth to 12 months, all on a background of thick vines of faux ivy. A friendly stegosaurus, a plant-eating creature of the Mesozoic era, stands right outside to bid the guests a warm hello. Everyone knows it’s going to be a gigantically fun party based on this fun setup. 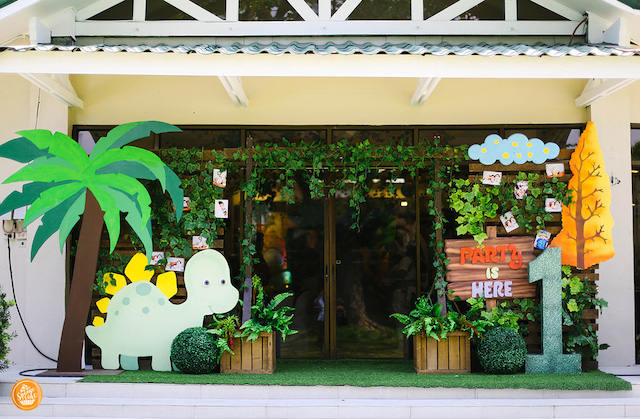 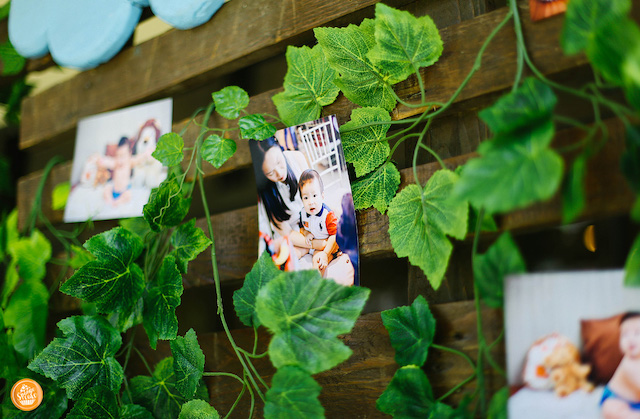 Hanging from strings of vines on the ceiling are sky blue, bright orange and sunshine yellow paper ball lanterns that look like Willy Wonka’s Dina-sour egg candies. At the center is a dinosaur egg piñata filled with delightful treats for the children. 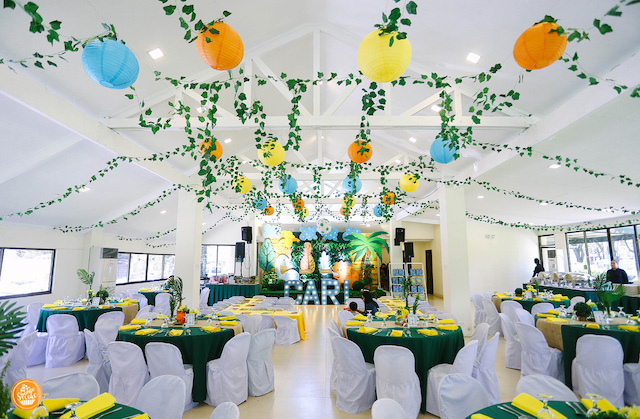 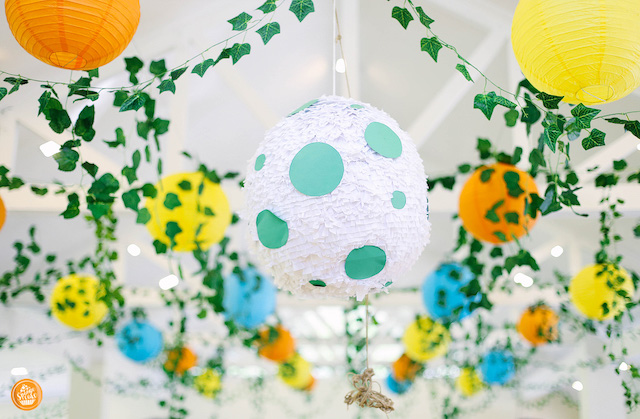 All eyes are automatically drawn to the stage, it looks and feels like some secluded spot in the Great Valley with a grass wall backdrop and clusters of ferns, a plant so ancient that it even predates the era of the dinosaurs. Two cute dinosaurs seem to be telling everyone to have a great time. 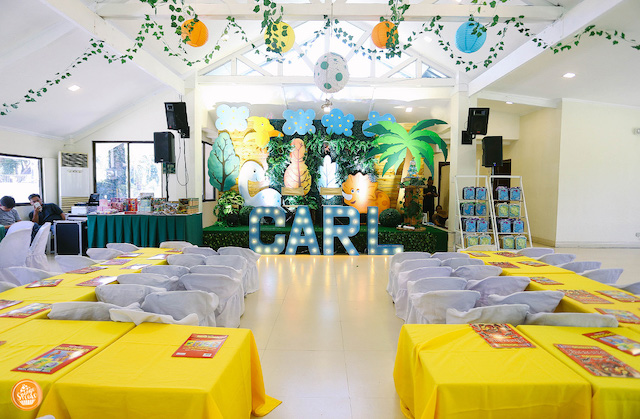 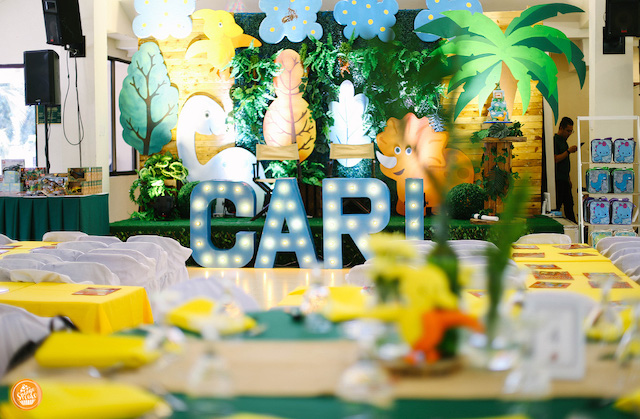 The tables were draped with dark green linens, the color of forest primeval, and a table runner of woven hemp. For a pop of color, bright, sunny-yellow table napkins were laid out with the silver. A pair of palm fronds were placed in a vase, accompanied by an arrangement of yellow mums and an adorable dinosaur plushy were gathered as table centerpiece. 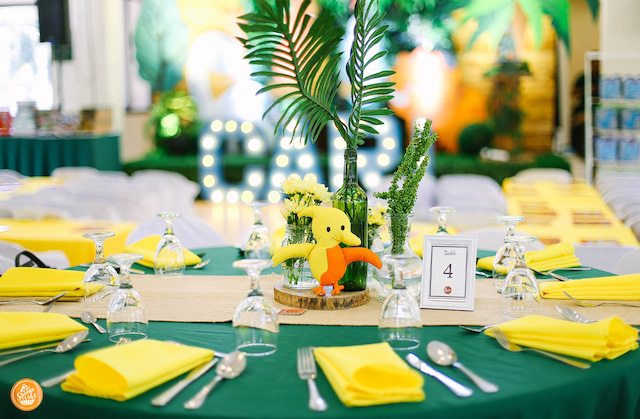 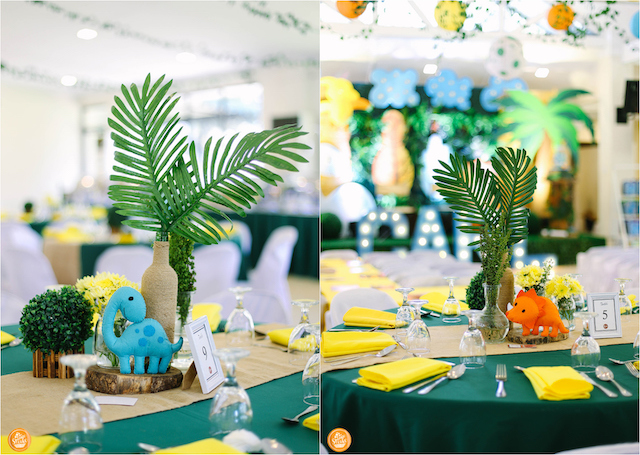 Carl’s birthday cake is made of three layers of dinosaur fun! It is covered in sky blue fondant with lots of fondant foliage in different shades of green. On the first layer, an Apatosaurus made of yellow fondant stands beside a huge gray dinosaur egg. An ancient volcano seems to rumble close by. While on the second layer, there’s a charming blue baby t-rex that seems to be watching out for his playmates. On the topmost layer is the birthday boy’s name with a lovable baby dinosaur. Who wouldn’t want to sink their teeth into such yummy treat? 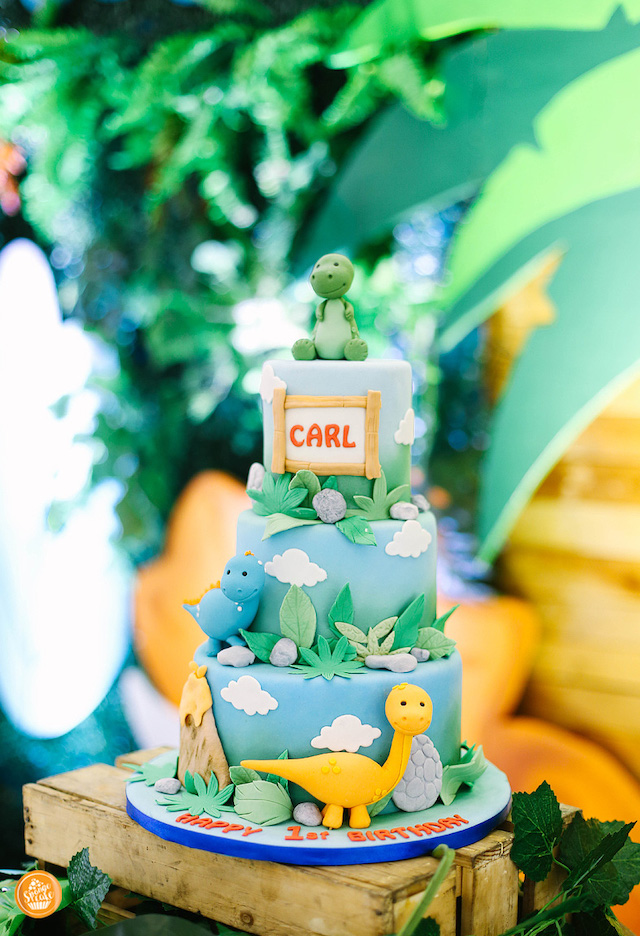 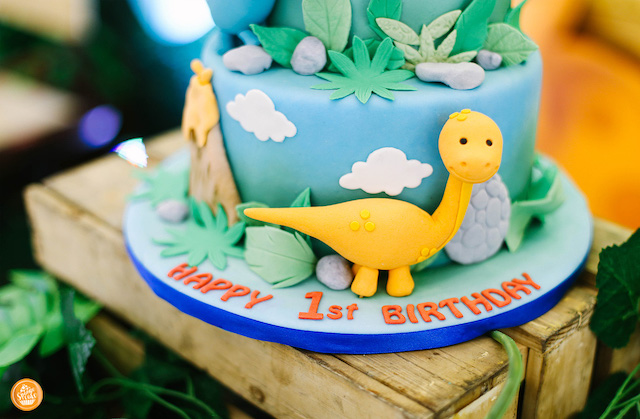 Kring from One Groove PH hosted the day’s program and led the children through some fun and exciting games. 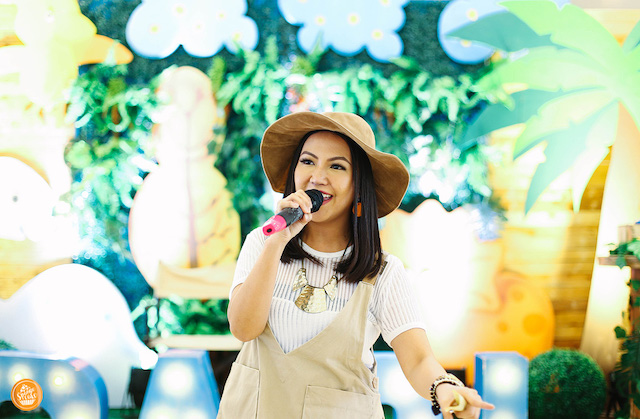 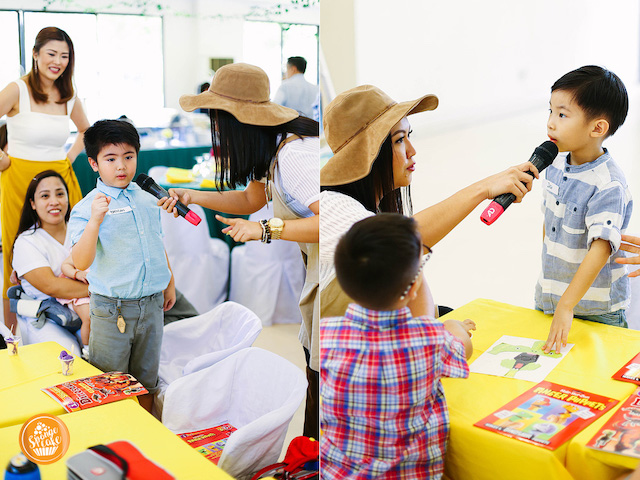 The Bubble Show put on a great spectacle for Carl and his guests. Dressed like archaeologists, these expert entertainers thrilled the children with a bubble show like no other. 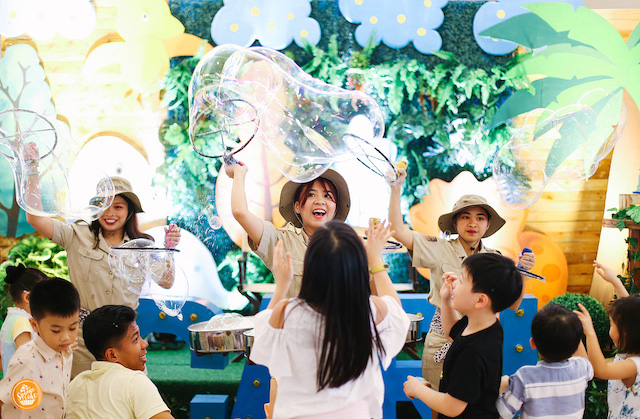 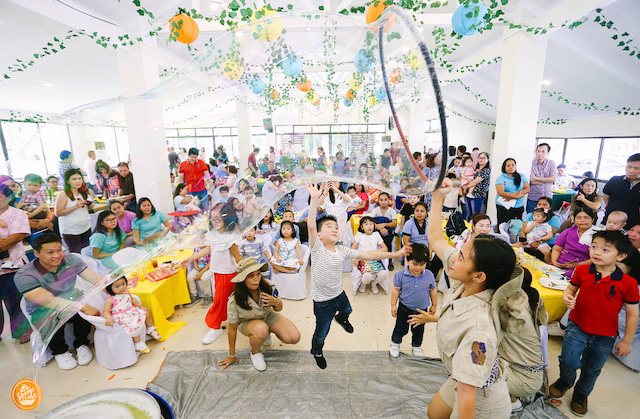 Aren’t these dinosaur bags just adorable? Carl’s friends went home with one of these in tow. 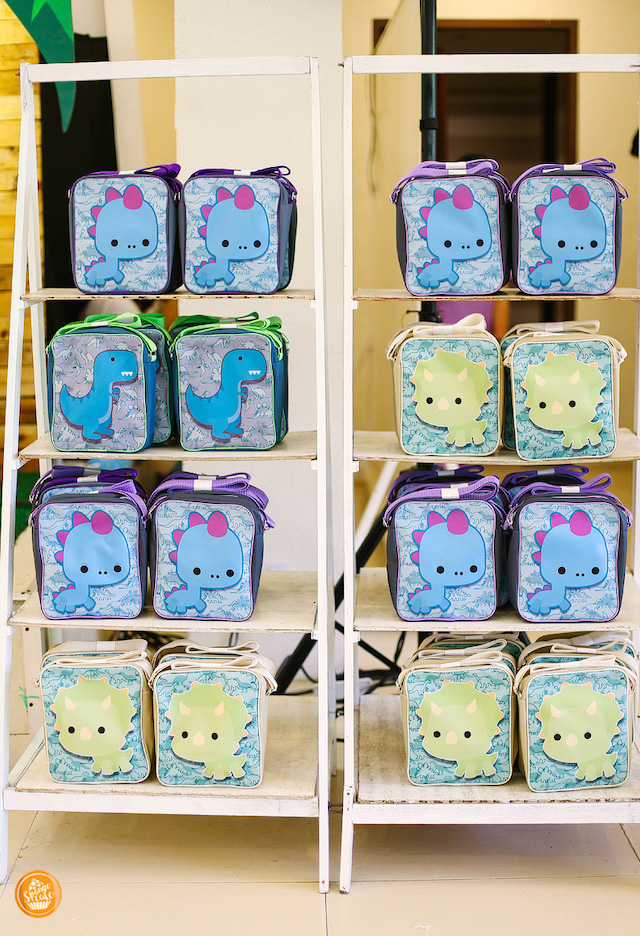 Wearing the cutest dinosaur get up, our birthday boy is all smiles in front of the camera. He knows it’s his big day and he’s celebrating it with his family! 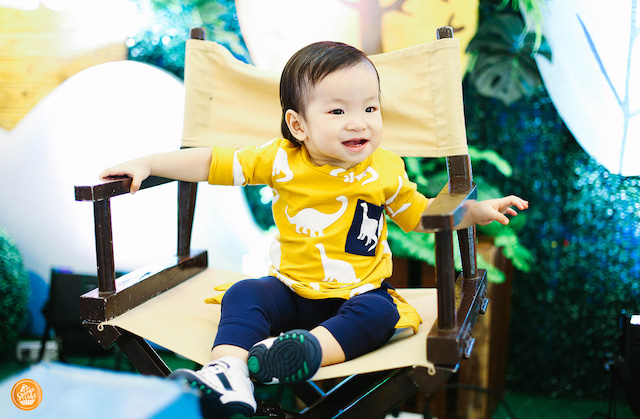 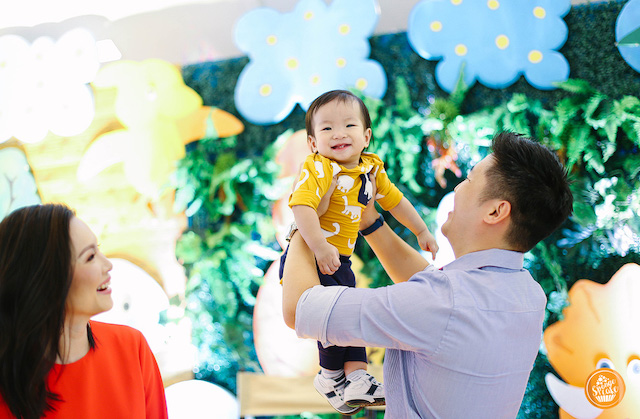 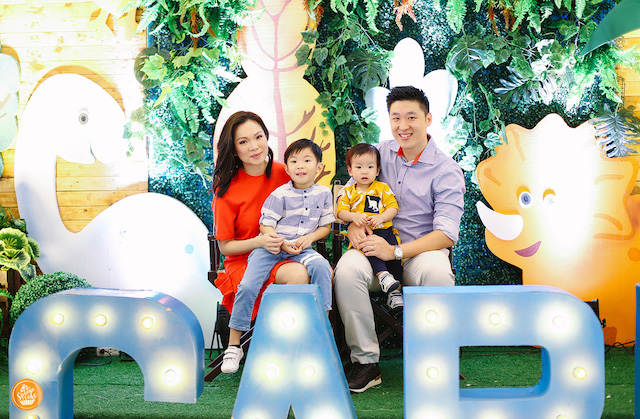