Woot woot! I’m currently doing my happy dance because I’m celebrating our very first Studio Ghibli themed party. I grew up watching animes – Flame of Recca, Boys Be, Ghost Fighter and Ayashi No Ceres to name a few. So I guess you can pretty much say that I’m so ecstatic to share Sophie and Ethan’s awesome joint celebration. We at PDM adore out of the box party themes and we truly appreciate the creativity that goes with it. With limited party decorations available in the market, making these themes come to life can be quite tricky. So imagine my surprise when I saw this party in our inbox! Hats off to Sarah Abono of With a Flourish for taking the challenge and successfully making this Studio Ghibli-themed party super amazing! *Slow clap.

To give us a more detailed behind the scene info on this party, here’s a special write-up by the event stylist herself, Sarah:
“Founded in Tokyo in 1985, Studio Ghibli is a world-acclaimed Japanese Animation Studio and the world’s most revered animation house which has released various films of critically acclaimed children’s classics. Known for its originality, lush animation, epic storytelling, attention to detail, and the way the movies can soak its audiences in a mood without any effort at all animation wise and plot wise— a trait many find lacking in most commercially produced cartoons. Ghibli’s stories take viewers of all ages seriously, never let commercial concerns get in the way of imagination, and more often than not give importance to the roles of female characters. Their films have gained such wide international appeal that Disney had acquired rights to adapt and distribute some of its films.

The parents of our celebrants are big followers of Studio Ghibli so for their children’s joint birthday celebration (daughter Sophie’s 4th and son Ethan’s 1st), they chose this very unique theme. The challenge posed on us was how to combine all their favorite Studio Ghibli animes in one party. Their choices: Ponyo, Totoro, Kiki’s Delivery Service, Spirited Away and Howl’s Moving Castle – all had different settings and characters! We studied the films, the styles done, their look & feel, even the predominant colors used to see how we could connect all of them to create a cohesive set-up. One connection was the animes’ affinity with the environment, with nature. You would see a lot of elements from nature in the styling that we did- from the entrance, the stage, centerpieces up to the dessert buffet. Even the DIY decors of the parents were in sync with our choice of props.

Despite the bigness of the stories, there was so much simplicity in the life of the animes’ protagonists who all embraced rural life. We channeled this simplicity in the laid back set-up that we did for every area of the event. We provided wood pallets placed on top of each other to serve as low tables and surrounded these with throw pillows -very much true to the Japanese culture. The guests – both the young and young at heart enjoyed hanging out at our “lounge”. The parents’ choice of party activities were also the laid-back type and non-commercial type of activities- Snow Globe Making, Sand Play Area, Building Blocks Area. It was a breath of fresh air to be at this kind of party!”

At the entrance, a blown up Totoro was seen welcoming the guests to the party. Totoro is a mythical forest sprite from the film “My Neighbor Totoro”. 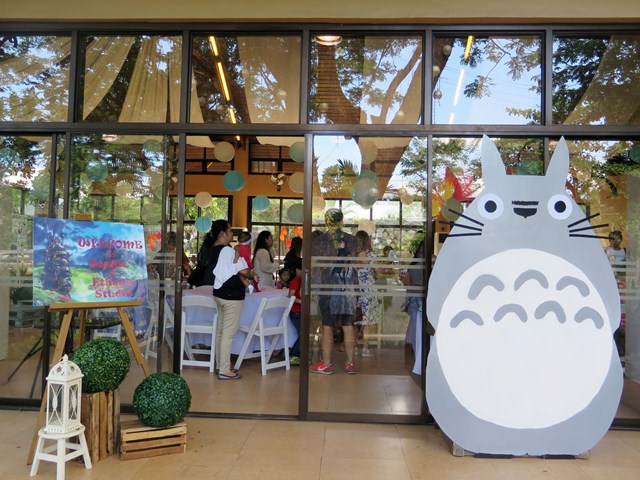 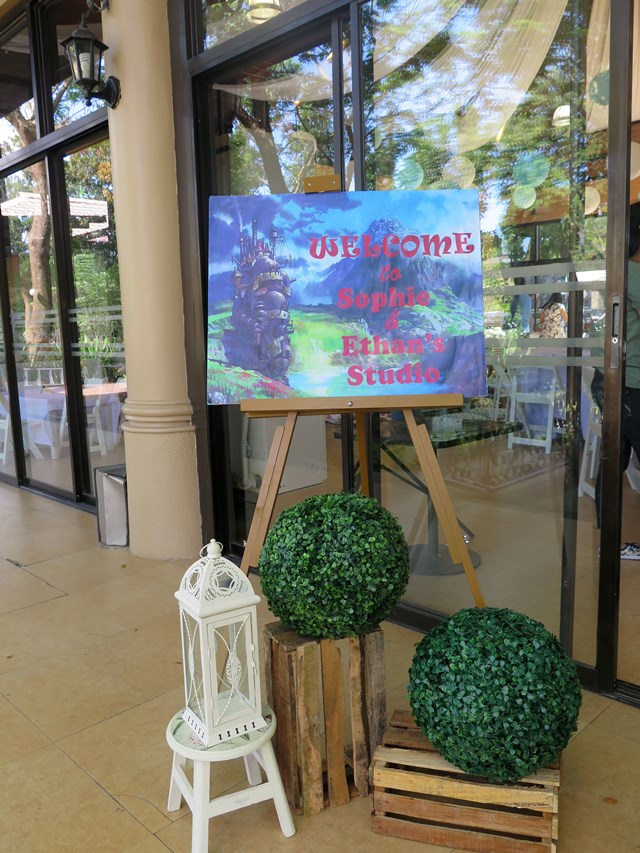 White swags and pastel colored lanterns were used at their ceiling setup to give the venue a clean yet festive feel. 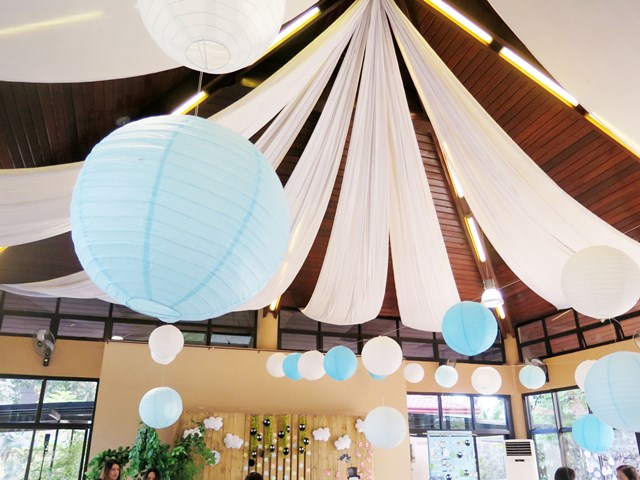 For their stage backdrop, they used different characters from various Studio Ghibli films to prettify the setup. There’s Totoro from My Neighbor Totoro, Jiji from Kiki’s Delivery Service and Howl’s Moving Castle Scarecrow. They even got some Scoot Sprites mixed in to the set! 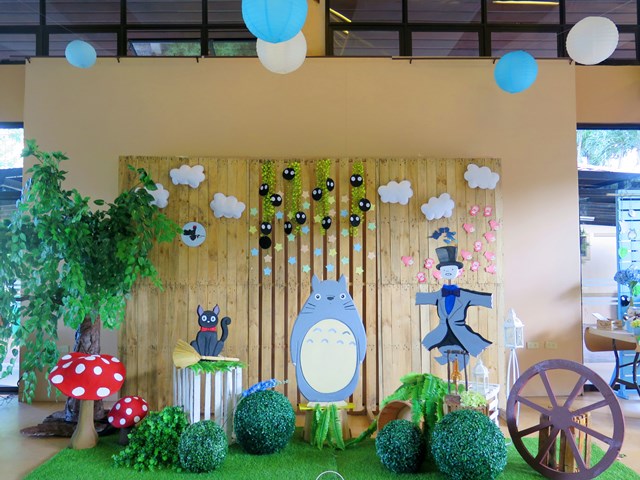 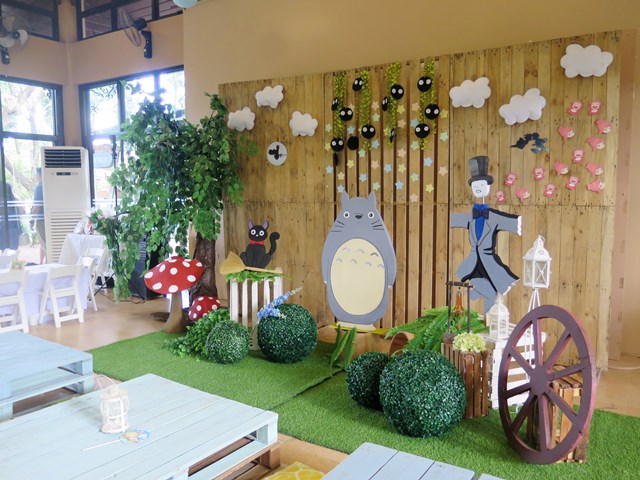 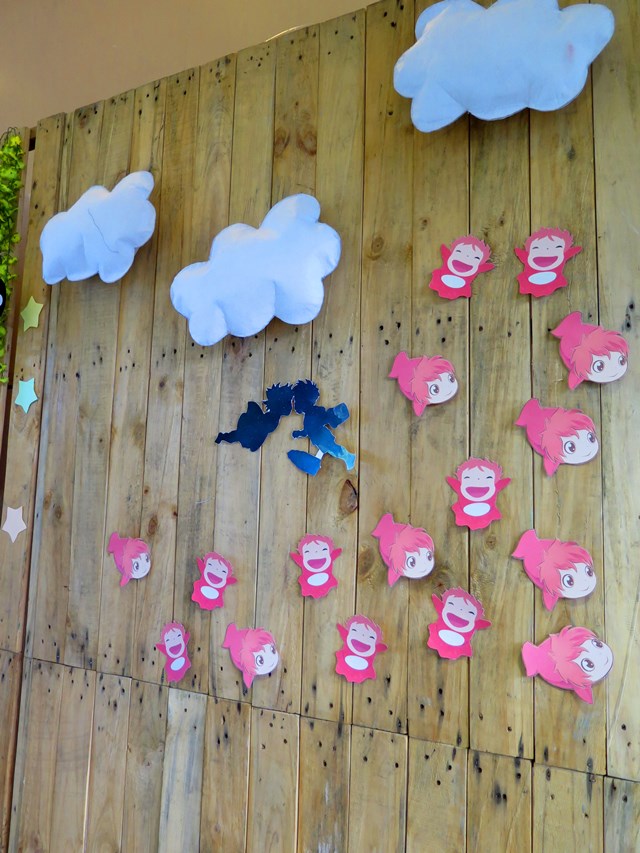 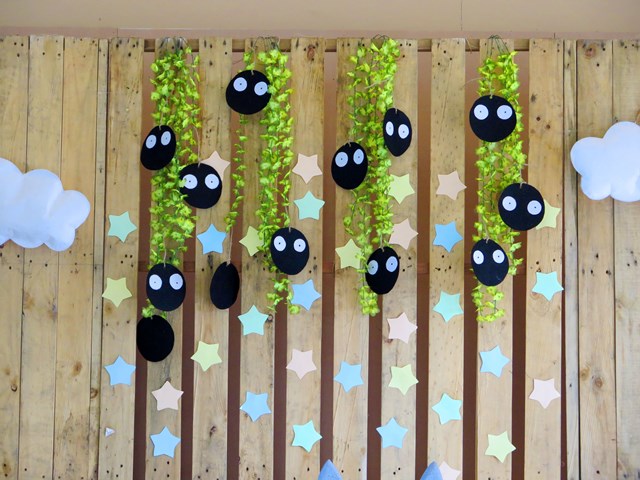 What’s up with wooden palette tables? This is the second or third time we’ve featured a party that uses wooden palette as kiddie tables and it’s awesome! Paired with colorful pillows for the kids to sit on, they also used pictures of different Studio Ghibli films to tie-in the setup to the theme. 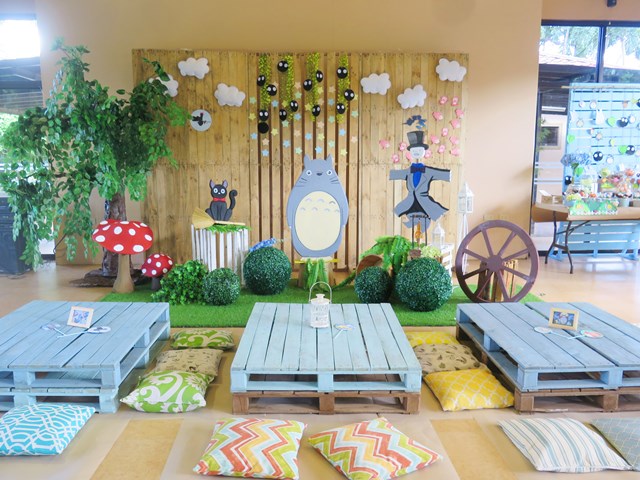 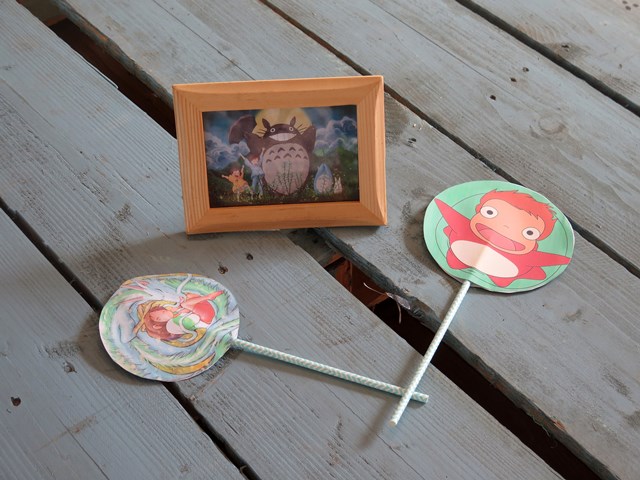 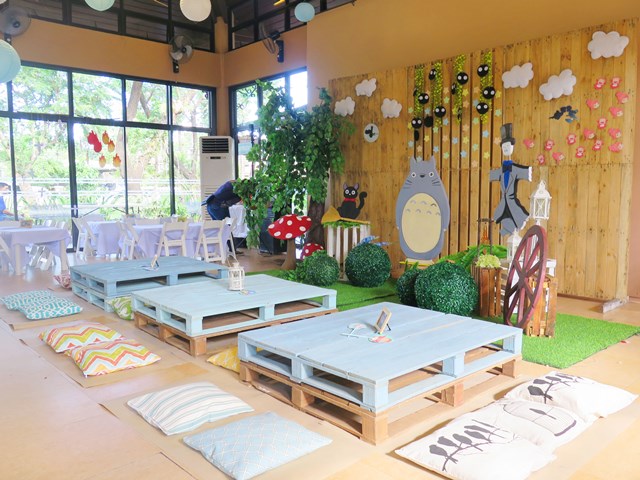 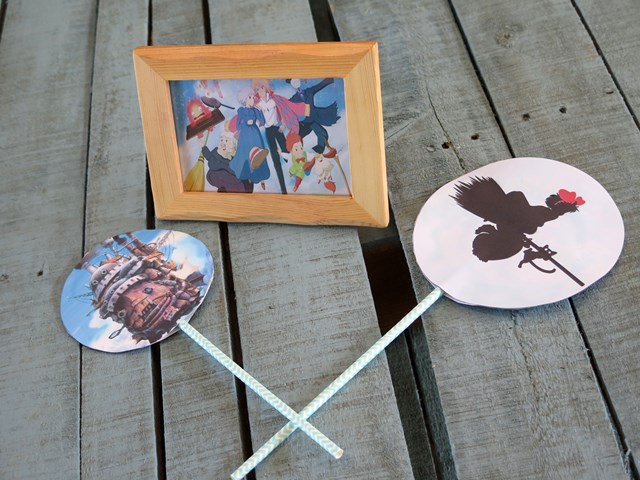 Different character plushies to adorn their adult table setup. To add color to the set, pretty florals were also used as part of their table centerpiece. 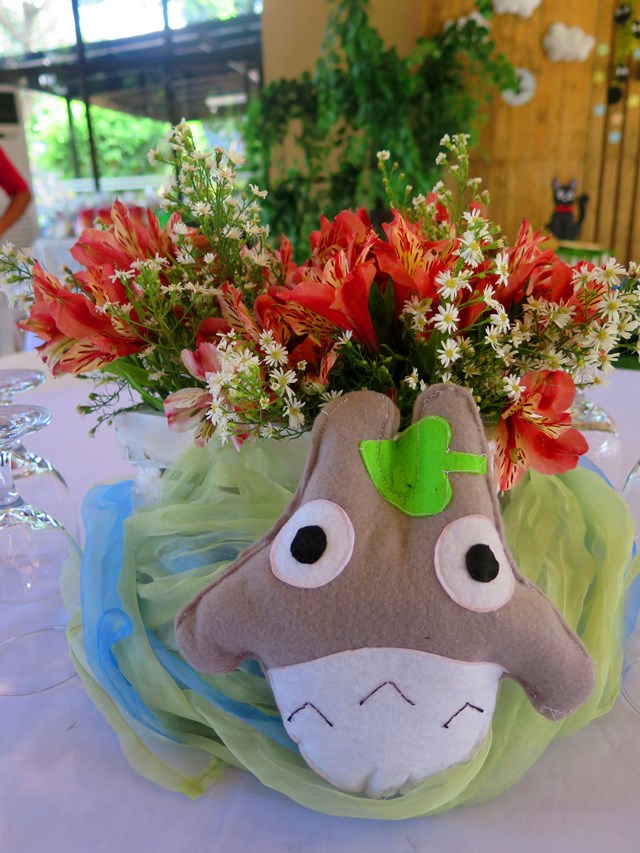 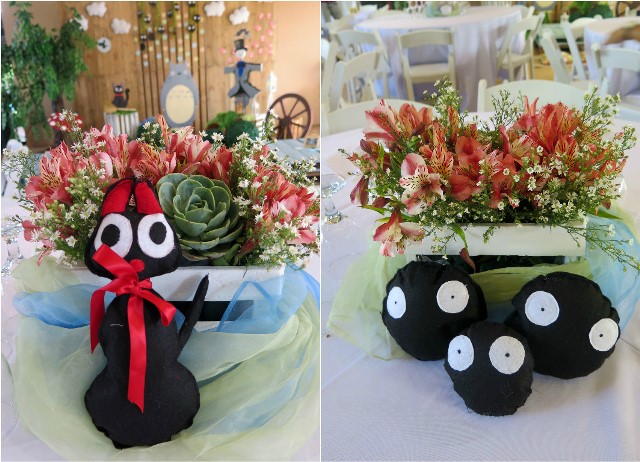 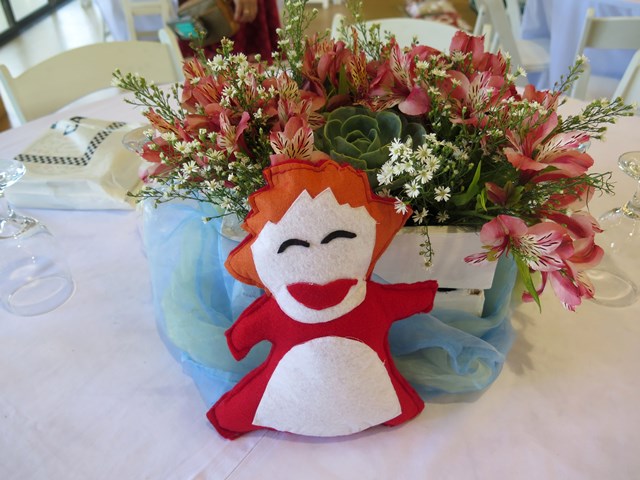 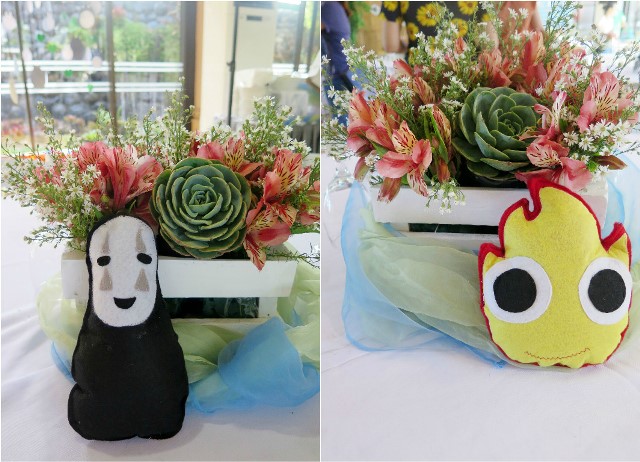 Cuteness overload! How adorable is this cake? Even their desserts were very much in to theme. Using creates and DIY paper cutouts, I love their dessert tablescape backdrop. 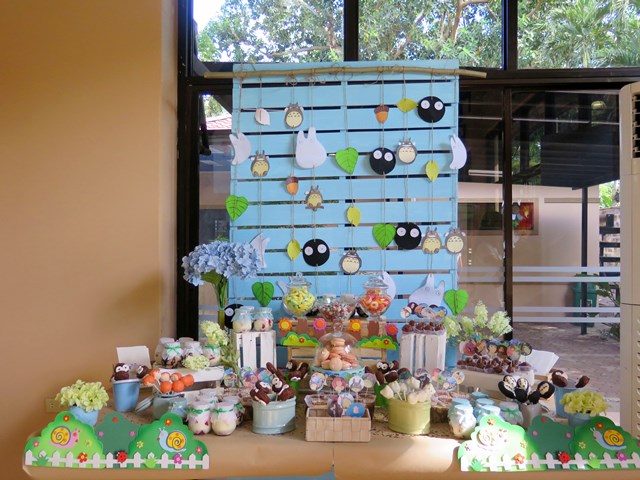 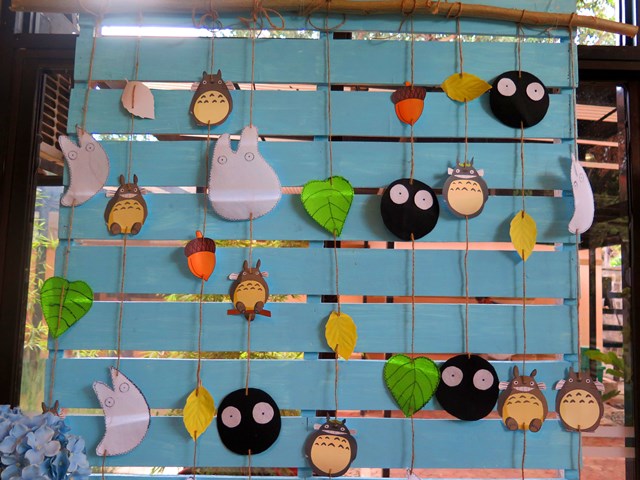 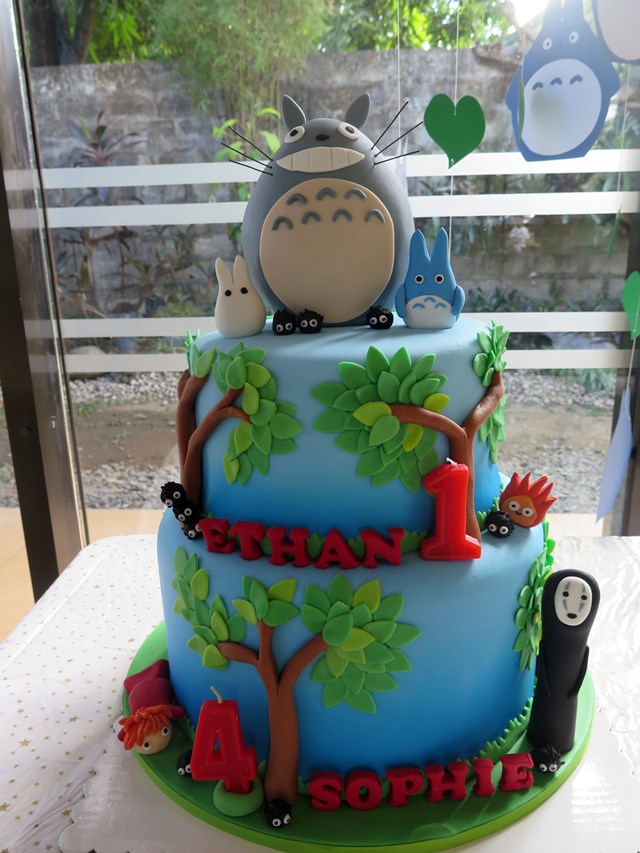 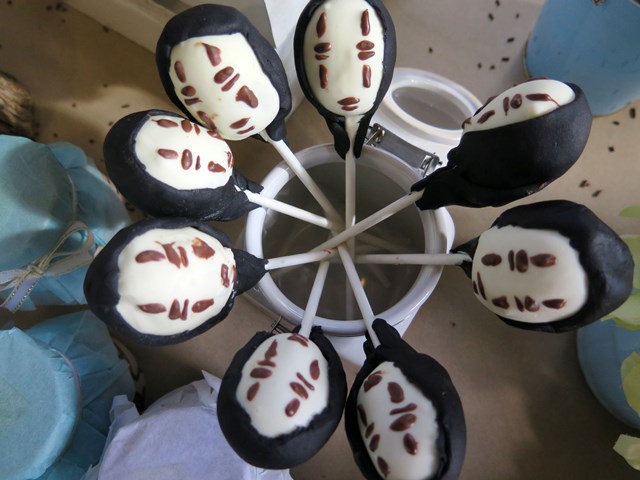 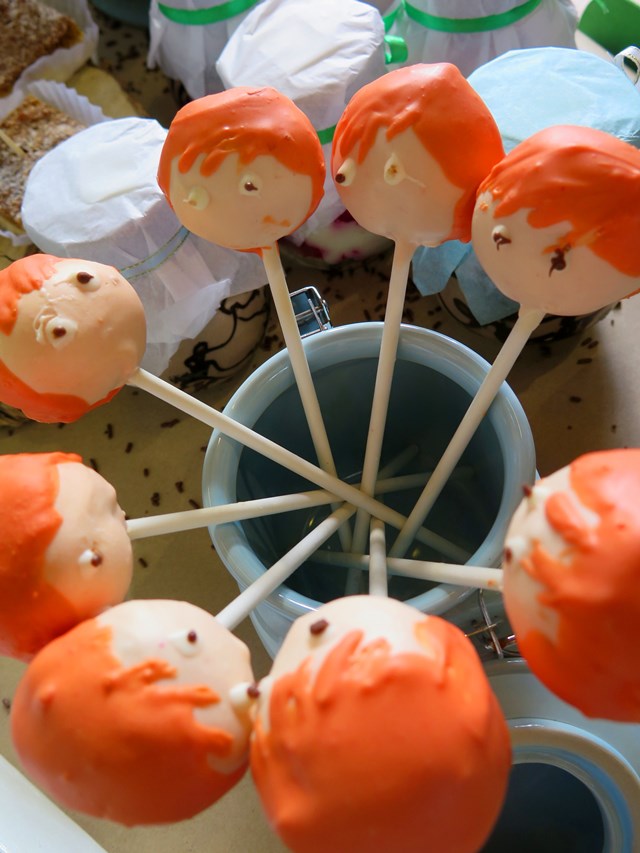 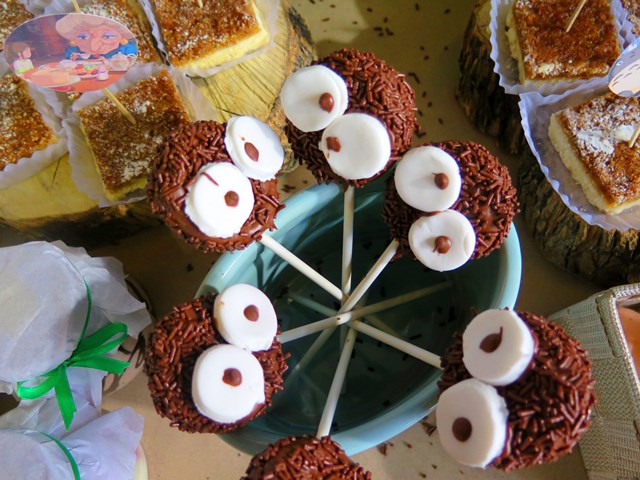 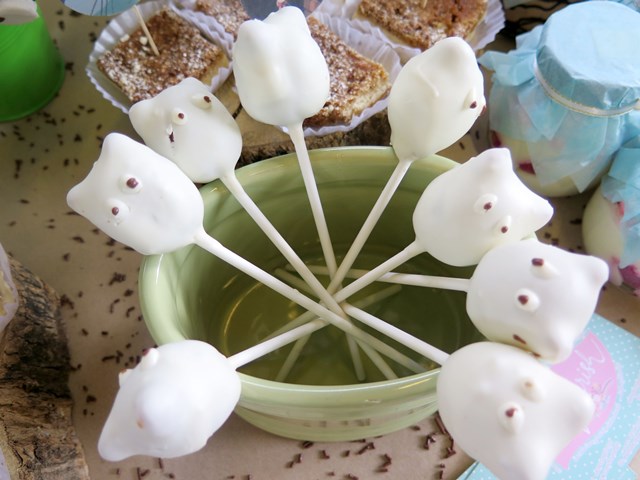 Sophie and Ethan’s friends busied themselves with different fun activities. I’m sure there’s no dull moment at the party. 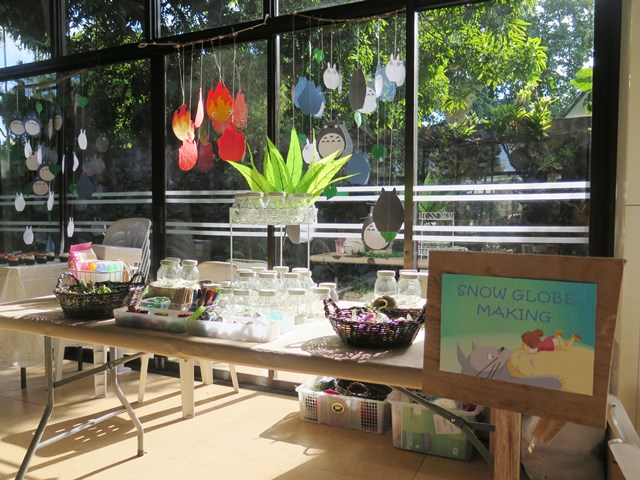 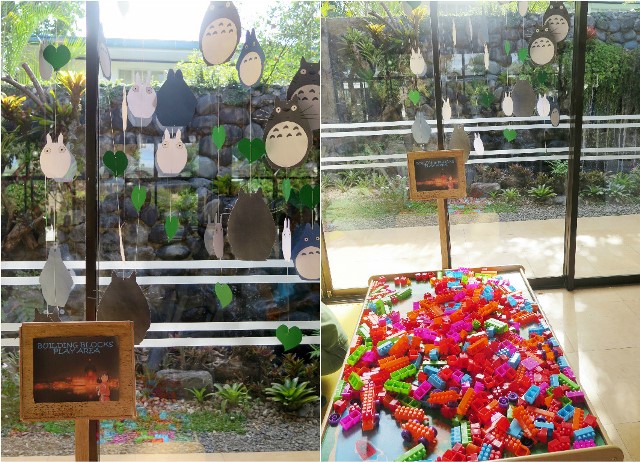 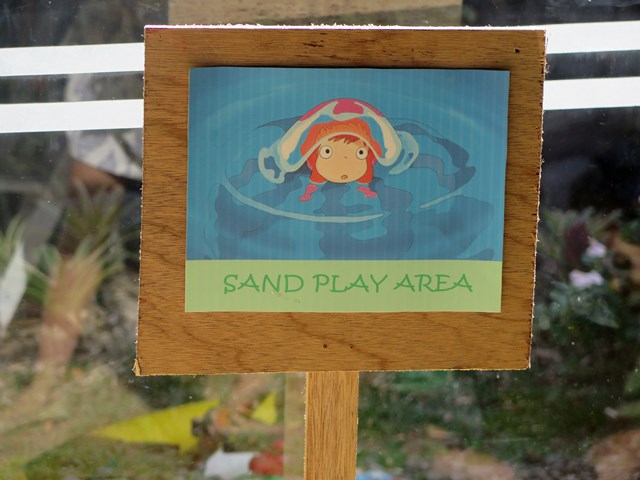 These Studio Ghibli films character plushies served as the perfect giveaways. I’m so glad that they took their time and put so much effort in making sure that every detail of the party matches the theme. 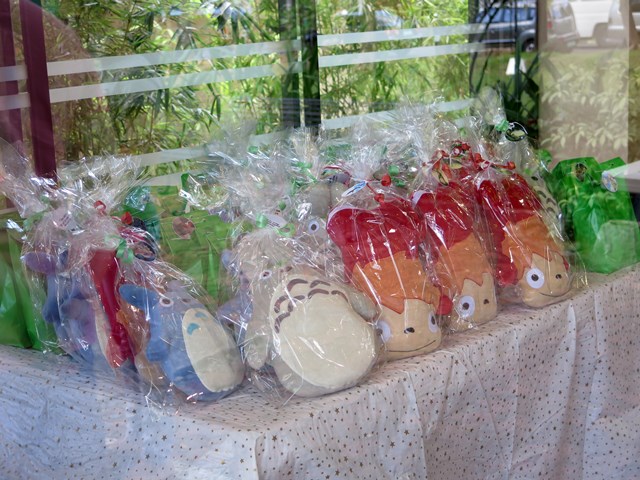 Vendors who made it all happen:
Stylist: With A Flourish // Desserts: Pop Shop